Twilight in a salute position.

"This spell's a toughie!"

"But I feel lucky this time."

What a long neck you have there, Twilight.

Pinkie you know better than to invade other's personal space.

Just wanted to say how much I love you.

Pinkie Pie has no bones

Twilight is not amused.

This is gonna be so much fun!

"What a cute orange birdy"

Um, Rairty, is it just me, or are you somepony in a Rarity mask?

Jumping up and down.

Rarity's latest creation, lovely as it is!

I worked hard on this fabulous dress.

I have special eyes...

You said what now Rarity?

I'm looking up at you, Twilight.

I think I'm freaking out again.

An awkward moment between friends.

"We weren't going to turn her into an orange!"
Add a photo to this gallery

Dashie ain't having none of these today.

Rainbow Dash smacking the fog with her tail

A Pinkie shows up.

What fun is this cloud thingie.

Oh oh let me help out!

There is debate whether this Pink streak has a speed potential up to par with Rainbow Dash.

We don't usually see Rainbow Dash spinning around like that!

Dashie looking at a cloud.

Applejack happily pulling Apple Bloom in a wagon of apples.

Pinkie about to jump in.

Mind if I join you guys?

Fluttershy having a tea party with Angel.

Pinkie Pie makes her Helga Phugly face that also looks similar to The Smooze from My Little Pony The Movie from 1986.

Good, just what I wanted to hear.

A butterfly on Pinkie's nose.

Glad I could help.

Um...Pinkie...I don't think spines are supposed to bend like that...should I call a doctor now?

Rainbow flies in front of Pinkie.

Twilight's spell turns a frog partially into an orange.

Look at the time!

I've only got this much time left.

Pinkie is an alarm clock

What is she going on about this time?!

My horn, can do magic.

Spike looks proud of himself.

That wasn't the answer Spike was looking for.
Add a photo to this gallery

The Everfree Forest gets scarier every time.

Are those branches hands?

Uh oh look out below!

Who placed that dangerous hole in the middle of the forest?

That is one bouncy Pie!

Anyone up for Pinkie face pancakes?

Pinkie won't lie to herself.

"And into her own reflection she stared."

"Uh, yearning for one whose reflection she shared."

"And solemnly sweared not to be scared."

"At the prospect of being doubly mared!"

Just like in G1, except the copy's an adult too

"Okay wait- I promised not talk to myself anymore."

I'm finding it hard to distinguish one from the other

Trying to not miss out on any fun

Pinkie and her duplicate leaving the Everfree Forest.

Now Pinkie can find out how annoying she really is

I think I see a lollipop in the bushes!

Dashie at the water hole.

Rainbow is reading the same book again, although Twilight has a huge selection of Daring Do books.

Time to catch some rays.

"Come on in Rainbow Dash, the water is extra warm today."

"What exactly does she mean by that?"

Rainbow Dash, trying to figure out what Pinkie is going on about.

Biting hold of a berry.

"I'm so glad you wandered by."

One of Fluttershy's critter friends bringing over a cheese for Pinkie.

Here, have some cheese.

A bit stringy though.

Did I say "Applejohn?" I meant "Applejack!"

"Walls? But we're outside."

"Goodness. Was it something I said?"

Rainbow Dash is not amused

Gearing up to catch some zzzs

How did she do that?

It's a maneuver called the Half-Münchhausen!

Am I crazy, or did I just see two Pinkie Pies.

For the sake of my SAN points, I shall remain too cool to care.

My Pinkie Sense is tingling...

I knew barrowing the "clone idea from Calvin and Hobbes was a bad idea! CURSE YOU BILL WATTERSON!

Okay...lead on Pinkie's...I promise there is fun.
Add a photo to this gallery

Too many Pinkie Pies!

How the heck is she able to whistle!?

And none but a leaf remained.

Attack of the clones!!

This can only end in tears...

Pinkie Pies cause trouble at the barn raising.

The Pinkies invade the barn raising!

Quick, escape the crime scene before it's too late!

Alright! What is going on here?!

Pinkies jumping on the tower

Where do ya think you're going?

"My poor friends!"
Add a photo to this gallery

Finding a way to solve the problem

Did Dr. Hooves visit the pool, too? There's two of him in the crowd!

An angry crowd at Twilight's doorstep.

"If I can't figure out which one is the real Pinkie, I might send her back by mistake!"

Wait, how did they fit in?

Figuring out the real Pinkie

The face face Pinkie Pie makes is the "scream-face" she made in MMMystery on the Friendship Express.

Will the real Pinkie Pie please stand up?

An army of Pinkie Pies

Awwww! So many cute Pinkie's!

Pinkies being taken to Town Hall

"Just the opposite actually."

Dash with the real Pinkie

Just toss her down. She's only a worthless clone, after all.

"Pinkies. You've been brought here to take a test."

"Don't worry, It's a simple test; about as simple as they come."

The horror! The boring horror!

"This is so exciting!"

"Okay, maybe not that exciting."

Pinkie clone debating whether she wants to explode, or keep watching the wall. How hard can it be?

"Watch me bounce and touch the ceiling!"

Hey, the hybrid frog is back!

"Look what I can do with my hooves!"

Lyra would be so jealous.

I can't believe the Pinkie Pie clone is surprised that the fourth wall is broken!

The way they get sent back is terrifying.

My horn is red hot. 🌋 Imagine if her horn would melt.

"Pinkie, you can look away now."

"You passed. You're the only Pinkie who kept staring at the wall!"

Doing a quick check to see if it's the real me.

Pinkie smiling
Add a photo to this gallery

We haven't seen Spike looking so comfy writing a letter to the Princess before.

Pinkie Helps undo the damage done by her Doppelgangers at Applejack's farm.

They finally found a use for Tom

Deserving to snooze and snore after all that friendship-making.

From a commercial, with Fluttershy and Rarity in place of a Pinkie Pie duplicate

From a commercial, horizontally flipped from the episode 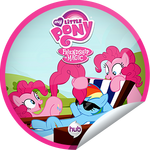 A GetGlue sticker with two Pinkie Pies.
Add a photo to this gallery
Retrieved from "https://mlp.fandom.com/wiki/Too_Many_Pinkie_Pies/Gallery?oldid=2162548"
Community content is available under CC-BY-SA unless otherwise noted.