Toola Roola and Coconut Cream are two female school-age Earth ponies who appear as supporting characters in the season seven episode Fame and Misfortune. In the show and other media, they are fillies, while in merchandise, Coconut Cream is an adult mare.

Toola Roola and Coconut Cream are based on the G3/G3.5 Earth pony mares of the same names, though Coconut Cream lacks the green crescent moon in her cutie mark that her G3 counterpart bears. Toola Roola's design is unusual in that her mane and tail are different colors; she shares this trait with "Kazooie", Micro 07 Unnamed Stallion - Keldeo, and sometimes "Cloud Showers", Cheerilee, Caramel, "Sir Pony Moore", Fine Line, Ploomette, Flitterheart, and others.

In response to a May 23, 2016 Twitter question addressed to Jim Miller, Ishi Rudell, and Tim Stuby when Toola Roola and Starsong would be introduced in the series, Jim Miller replied, "When it's time."[1]

In the season seven episode Fame and Misfortune, Toola Roola and Coconut Cream first appear throwing cupcakes, ice cream, and other confections at each other because of an apparent falling-out and calling each other their "ex-friend". When Twilight Sparkle gets caught in the middle of their conflict, she helps them patch things up with a friendship lesson.

Later in the episode, Toola Roola and Coconut Cream have another disagreement over a game of hopscotch. Twilight once again comes between them and offers them a copy of her and her friends' published friendship journal to help them make amends.

Near the end of the episode, after the publishing of the friendship journal has created a rift between many of the ponies in Ponyville and brought misery to the Mane Six, Starlight Glimmer brings Toola Roola and Coconut Cream to see them at the Castle of Friendship. The two fillies express gratitude to the Mane Six; after reading their journal, they learned that "friends can go through all sorts of tough times", and it has made their friendship stronger than before.

The Toys "R" Us Pony Collection Set includes a mini-figure toy and collector card of Coconut Cream. They and their packaging depict Coconut Cream as a mare, the card and the packaging list Coconut Cream's name with a trademark symbol, and the card states that Coconut Cream "makes delicious pies to share at parties and picnics. The only thing she won't share is the secret ingredient!"

Toola Roola: Oops! Sorry, Princess Twilight. That was meant for her.

Coconut Cream: That was meant for my ex-friend.
Toola Roola: I'm not your ex-friend – you're my ex-friend!

Toola Roola: No! I don't wanna play with you anymore!
Coconut Cream: Why not?! You love playing hopskotch!
Toola Roola: No, you do because you always win!

Toola Roola: Um, we just wanted to say thank you. To all of you.
Coconut Cream: Yeah, our friendship? Well, we were having trouble until we read your journal. It showed us that friends can go through all sorts of tough times and come through stronger than before.
Toola Roola: It's made us better friends than we've ever been! 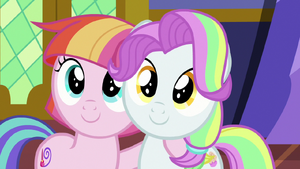 Retrieved from "https://mlp.fandom.com/wiki/Toola_Roola_and_Coconut_Cream?oldid=2048025"
Community content is available under CC-BY-SA unless otherwise noted.