Top Bolt is the twenty-fourth episode of season six of My Little Pony Friendship is Magic and the one hundred and forty-first overall. The title is a reference to the 1986 Tom Cruise film Top Gun.

In this episode, Twilight Sparkle and Rainbow Dash are called to the Wonderbolt Academy by the Cutie Map to help academy hopefuls Sky Stinger and Vapor Trail with a friendship problem.

As part of their Make-A-Wish request, Lex Heule played their original character Angel Wings,[1] whom they have referred to as "Angel Heart". Heule announced their role and then-potential character in mid-August 2015,[2] later recorded official audio sometime within August–September 2015,[3] and later still released a photo showing Pony Creator[note 1] artwork of the character in November 2015.[4]

The Academy recruits were designed by Kora Kosicka, Charmaine Verhagen, and Fernanda Ribeiro.[6]

Of the fifth and sixth seasons' Cutie Map episodes that are recapped by characters in My Little Pony: Cutie Map Quest A Punch-Out & Play Activity Book, this episode is the second of two such episodes whose scheduled premieres postdate the book's publication and August 2, 2016 release.

The title was revealed on Zap2it on September 5, 2016, before it was removed immediately after.[7]

A 24-page storybook written by Magnolia Belle, titled My Little Pony: Top Bolt, was released on May 2, 2017.

At the Wonderbolt Academy, Rainbow Dash finishes her spring training with the Wonderbolts and looks forward to spending her time off with her friends. Spitfire briefly laments being stuck at the academy during her time off training new academy recruits before Rainbow reminds her that she loves yelling and blowing her whistle. On her way home to Ponyville, Rainbow Dash's cutie mark suddenly starts glowing, indicating that she is being summoned by the Cutie Map.

She flies to the Castle of Friendship, where Twilight Sparkle tells her that she has been summoned by the map as well. Unfortunately, the map is calling the two to where Rainbow Dash just came from: the Wonderbolt Academy.

"I was just there!"
— Rainbow Dash

Back to the academy

Twilight and Rainbow fly to the academy, where Spitfire instructs a small group of Pegasi for the academy's week of trials. When Twilight and Rainbow appear, the trainees are excited to meet the Princess of Friendship and the most recent full-fledged member of the Wonderbolts before Spitfire commands them to do laps. When Spitfire asks why Rainbow has returned to the academy so soon, she explains that she is on "official friendship business". Twilight asks Spitfire if she's noticed any ponies having friendship problems, but Spitfire says she hasn't.

As the trainees demonstrate poor form and technique during their laps, Twilight suggests that Rainbow give them advice, but Rainbow states she doesn't want to mess with their confidence. Luckily, the academy's trials week has a classroom portion, and Twilight sees this as an opportunity to both teach the trainees and observe their relationships.

In the academy classroom, Twilight and Rainbow introduce themselves to the trainees. Among them are two particular trainees: an overconfident stallion named Sky Stinger and his timid wingpony/best friend Vapor Trail. The two have always flown together, but Rainbow points out that part of the trainees' final evaluations is a solo flight trial. Vapor Trail is intimidated by this, but Sky Stinger is certain that he'll pass.

Holding each other back

After class, Sky Stinger approaches Twilight and Rainbow and admits, although he is sure of his own flying skills, he worries about Vapor Trail's chances. With the freestyle training portion of the academy trials about to start, Twilight and Rainbow offer to observe their team flying.

In their observations of Sky and Vapor, Twilight and Rainbow discover that Vapor is using her wings to boost Sky's flight power, meaning he's not as great a flyer as he thinks. At the same time, Vapor is so focused on making Sky look good, she disregards her own flying. As a result, the two are unintentionally holding each other back from succeeding. Twilight realizes this is the friendship problem that they've been summoned to solve. However, while Twilight thinks they should tell Sky and Vapor what they are doing, Rainbow Dash believes telling them could harm their performance in the academy trials.

In the academy locker rooms, Twilight and Rainbow speak with Vapor Trail alone and reveal they know she's been supporting Sky Stinger. Vapor Trail feigns ignorance, but they inform her that her secret could negatively affect Sky's evaluation during the solo trials. When asked why she supports Sky the way she does, Vapor explains that Sky grew up with a lot of brothers and sisters and often struggled to get attention from his parents. Meanwhile, Vapor grew up as an only child and received too much attention from her parents.

When Sky struggled to perform aerial tricks for his parents, Vapor secretly gave him a boost with her wings and offered him praise, and the two became friends. Since then, the two have always flown together, with Vapor boosting Sky's flying, but Sky remained ignorant of Vapor's actions. Twilight and Rainbow explain that Vapor and Sky need to improve their skills as individuals or else they won't be able to get into the academy. Vapor agrees but wants to keep Sky in the dark about what she's been doing so his confidence isn't damaged.

Rainbow Dash helps Vapor Trail improve her aerobatic tricks, and Twilight personally tutors Sky Stinger in strengthening his wingpower. Unfortunately, only Vapor shows a marked improvement; Sky under-performs at every aspect of Twilight's training. Despite this, Sky remains certain that he'll easily get into the academy and become a Wonderbolt. Unable to keep her secret any longer, Vapor admits to having helped Sky fly the whole time.

When Sky fails to do an aerial trick on his own, he becomes bitter and takes it out on Vapor, accusing her of trying to humiliate him. Sky flies off in anger, wondering why he was ever friends with Vapor in the first place.

Later, during the Dizzitron trials, Sky Stinger refuses to acknowledge Vapor Trail, much to her heartbreak. Twilight believes this could've been avoided if they had just done things Rainbow Dash's way, but Rainbow realizes that Twilight's solution was better after observing Sky's earlier lack of effort. As a result of Sky and Vapor's falling-out, Sky performs terribly in his trial evaluations. Spitfire is irritated to see one of her most promising trainees suddenly fail, but Rainbow vows to fix things.

Some time later, Twilight approaches the downtrodden Sky Stinger and explains to him that she was once just as bad at friendship as he is at performing tricks. However, she improved over time with practice and the help of her friends. Meanwhile, Rainbow Dash goes to Vapor Trail and tells her that she would be an amazing flyer if she came out from under Sky Stinger's shadow. Having had no interest in being a Wonderbolt before, Vapor Trail admits that she had fun practicing tricks with Rainbow earlier and decides this is indeed what she wants for herself.

At Twilight and Rainbow's encouragement, Sky Stinger and Vapor Trail reconcile their differences and misunderstandings. Sky makes more of an effort to improve his own flying skills, and he gives Vapor advice on her aerobatic feats.

When the day arrives for the trainees' solo trials, Sky Stinger and Vapor Trail each give impressive performances, much to the amazement of their fellow trainees. As a result, they are accepted into the Wonderbolt Academy with flying colors. Sky Stinger acknowledges that, even though Vapor Trail is a better flyer than him, she can be his wingpony anytime. As they fly off together, Twilight and Rainbow's cutie marks start to glow, meaning their friendship mission is a success.

With their friendship mission complete, Twilight and Rainbow Dash return home to Ponyville. But before Rainbow can enjoy spending time with her friends, Misty Fly appears on Twilight's castle doorstep and informs Rainbow of a "Wonderbolt emergency" at the academy that requires her immediate attention.

"You've gotta be kidding me! I was just there!"
— Rainbow Dash

Rainbow Dash: I'm gonna catch up on some Daring Do with Twilight, help Applejack make my favorite cider, and have a sleepover with Pinkie!
Misty Fly: We get it. You have a fun week planned.
Spitfire: Meanwhile, I'm stuck here running trials week at the Academy.
Rainbow Dash: But you love yelling and blowing your whistle.
Spitfire: Yeah. I do.

Spitfire: All right, newbies! Welcome to trials week for the Wonderbolt Academy! You'll be judged on your speed, strength, agility, and technique, culminating in a final evaluation. Will it be hard? Yes! Will you cry? Maybe. Will you fly so much your wings fall off? That has only happened once.
Angel Wings: She's just exaggerating to make a point, right? I mean, wings can't really fall off... can they?

Angel Wings: You don't think Rainbow Dash is the pony whose wings fell off, do you?

Angel Wings: [to Twilight and Rainbow] Um, I just wanted you to know, you two are my favorite ponies in all of Equestria.
Spitfire: Well, isn't that sweet? Now get going on those laps!

Twilight Sparkle: [gasps] I think you're right! Vapor just created a gust of wind that caught Sky's wing at a forty-five degree angle, propelling him into a flipping loop! [beat] Somepony paid attention in class!

Rainbow Dash: Then we have to find a way to help both of you.
Twilight Sparkle: Starting with telling Sky the truth.
Vapor Trail: No, you can't! Sky will be crushed! And without his confidence, he won't fly as well!
Twilight Sparkle: [sighs] Then I guess we'll give Dash's method a shot.
Rainbow Dash: Yes! Hah-hah! I love being right!

Twilight Sparkle: I wasn't a natural at friendship. But with some practice and help from my friends, I got better, and now I'm the Princess of Friendship!
Sky Stinger: So you're saying I can be the... Princess of Flying?

Rainbow Dash: Now, you can either stay mad, or help each other and become two of the greatest flyers the Wonderbolt Academy has ever seen! [beat] Please pick the second option. I don't want Spitfire to be mad at me.

Angel Wings: [to Sky Stinger and Vapor Trail] Um, I just wanted you to know, you two are my new favorite ponies in all of Equestria.
Rainbow Dash: Hey, I heard that! 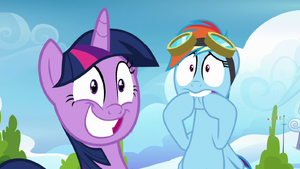