Tornado Bolt is the placeholder name of a Pegasus filly with a light grey coat, purple mane and tail, and light green eyes. She appears with tornado and horseshoe cutie marks in Call of the Cutie and with a light bulb cutie mark in Twilight Time, but without any cutie mark at all in other episodes.

She shares her design with "Princess Erroria" and Cotton Cloudy.

She, along with Cotton Cloudy, "Princess Erroria", "Noi", Aura, Liza Doolots, and "Dinky Doo" and as well as Prim Posy, Lemony Gem, "Serena", "Pinkie Feather", "Rainy Feather", "Mango Dash", and "Sweet Pop", was to appear in Friendship is Magic, part 2.[1]

Tornado Bolt's first appearance is in season one in the episode Dragonshy, where she's briefly seen as an Earth pony with no cutie mark playing with other foals at Ponyville Park. In Call of the Cutie she is seen with a tornado cutie mark, talking to Lyra Heartstrings and a filly in the streets of Ponyville, later among the crowd of foals at Diamond Tiara's cute-ceañera, and once as an Earth pony with a horseshoe cutie mark. In The Cutie Mark Chronicles, she is seen in the race audience in Rainbow Dash's flashback, cheering excitedly with a pink filly that shares her design.

In season two, Tornado Bolt appears in a total of eleven episodes, mostly as a background pony for brief shots. She appears as one of the foals in Twilight Sparkle's nightmarish kindergarten vision in Lesson Zero. In The Cutie Pox, she has a lengthy scene among the Ponyville Schoolhouse foals watching Apple Bloom perform. She is seen in a crowd in The Mysterious Mare Do Well, standing with two mares in the background in Secret of My Excess, standing next to Fluttershy in the crowd in The Last Roundup, in wonder at the cider machine with two adult ponies and two foals in The Super Speedy Cider Squeezy 6000, and standing with Derpy in an aerial shot in Hearts and Hooves Day.

In A Friend in Deed, she skips rope with some other foals and joined by Pinkie Pie during her Smile Song. She also appears as one of the foals mocking young Fluttershy in a flashback in Hurricane Fluttershy, in line for Snails' autograph in Ponyville Confidential, and in two scenes in A Canterlot Wedding - Part 2: cornered into an alley with Dr. Hooves and Golden Harvest by changelings, and later in the crowd watching Princess Cadance and Shining Armor stepping into their wedding carriage.

In season three, Tornado Bolt appears briefly in One Bad Apple and Games Ponies Play. In Magical Mystery Cure, she is in the background during the song Morning in Ponyville, although without her cutie mark and wings, and in the next scene as one of the ponies glaring at Rarity.

In season five, Tornado Bolt appears in The Cutie Map - Part 1 as a resident of Our Town. In The Lost Treasure of Griffonstone, Tornado Bolt flies through Junior Speedsters Flight Camp in Gilda's flashback. In Slice of Life, she appears in the crowd of ponies gathered outside the Ponyville bowling alley watching the Mane Six huddled together. At the end of Rarity Investigates!, Tornado Bolt watches the Wonderbolts' performance alongside "Chelsea Porcelain". She also appears watching the Sisterhooves Social in Brotherhooves Social and appears again at the Ponyville Schoolhouse during the election for Student Pony President and later helps rebuild the playground in Crusaders of the Lost Mark. In The Cutie Re-Mark - Part 1 and The Cutie Re-Mark - Part 2, she appears in the time loop spectating the race that caused Rainbow Dash's first ever sonic rainboom; in the latter episode her form is also used by a changeling next to Doc Top in an alternate timeline.

In The Gift of the Maud Pie, Tornado Bolt appears in Manehattan playing a floor piano with an unnamed stallion at a toy store before Pinkie Pie joins in, and later makes background appearances sitting in a park with Apple Bumpkin and walking by the future site of Rarity for You with Blueberry Curls. In On Your Marks, she makes a background appearance in the audience for Tender Taps' dance recital. In A Hearth's Warming Tail, she appears in a choir caroling in a park during Hearth's Warming Eve Is Here Once Again, before finishing the song by the tree during a Hearth's Warming Eve celebration at the Castle of Friendship. She later appears in the "A Hearth's Warming Tale" story in Canterlot caroling to Chelsea Porcelain with other fillies and receiving a toy train from the spirit of Hearth's Warming present, played by Pinkie Pie during Pinkie's Present, and subsequently getting hit by a snowball thrown by Princess Erroria before throwing one at a miscolored Liza Doolots.

In Forever Filly, Tornado Bolt makes cameo appearances in Ponyville in the audience for Claude's puppet show and subsequently in the line of foals for Twisty Pop balloon animals at a park. In Parental Glideance, she appears in the audience for the Wonderbolts' showcase in Canterlot and later as the first pony in line for their autograph signing in which she is hit by part of a shirt thrown by Bow Hothoof before receiving her autograph. She later appears in a flashback in Cloudsdale watching a medal ceremony with an unnamed mare for a pegasus foal race. In Fame and Misfortune, she appears at the Ponyville Schoolhouse in a crowd of foals interested by the Cutie Mark Crusaders due to the publication of the Mane six's Friendship Journal. She later appears as one of Rainbow Dash's fans holding a copy of the journal before following her.

In Yakity-Sax, she makes a cameo appearance spectating a Wonderbolts show in Canterlot and later appears running through Ponyville with Piña Colada. In The Washouts, she appears in the audience for each of the titular group's two Ponyville shows.

She appears in the European magazine​[​specify​]​ comic Trixie never gives up! during the story about young Trixie. 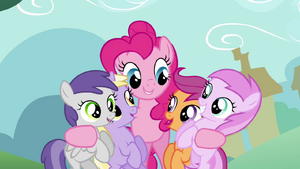