Trade Ya! (spelled as Trade Ya by some sources) is the twenty-second episode of the fourth season of My Little Pony Friendship is Magic and the eighty-seventh episode overall. In this episode, friendships are tested when a trip to the Rainbow Falls Traders Exchange goes wrong.

This episode is listed as season four's eighteenth episode on iTunes.[2] On Zap2it, it is listed as the twenty-third episode of the fourth season.[3] Google Play has this episode's original air date listed as April 18, 2014.[4]

When asked on whether Trade Ya is the "original 418 but got pushed back", Jim Miller replied "yes" and states that it was "pushed back for production reasons".[5]

The character of Stellar Eclipse, the pony who sells the Discord-shaped lamps and whose back legs are in a wheelchair cart, was designed after and voiced by Sylvain Levasseur Portelance, a teenage child with spinal muscular atrophy type III, through the Make-A-Wish Foundation.[6]

Twilight Sparkle and her friends arrive at Rainbow Falls for the Rainbow Falls Traders Exchange to trade various items. As the official princess representative for the Exchange, Twilight finds a large welcoming party waiting for her.

Each of the seven friends are at the Exchange with various prospects in mind: Spike seeks to trade a mint condition Power Ponies comic book for another; Rainbow Dash hopes to acquire a first-edition copy of Daring Do and the Quest for the Sapphire Statue; Fluttershy wants to trade a bear call for a bird whistle; Applejack and Rarity seek out rare, vintage items and decide to pool together their trade stashes; and Twilight herself hopes to trade away some of her old books.

The joys of trading

At a trading stand owned by a collector of Daring Do merchandise, Rainbow Dash finds the first-edition book she seeks. However, all she has to trade for it is an old, rusty horseshoe, which the collector refuses to accept. The collector only agrees to trade the book for an orthros owned by a dealer of ancient beasts.

Elsewhere, Applejack and Rarity each find a vintage item they want, but each item costs all of their goods. Applejack seeks a pie tin that Rarity visibly disapproves of, and Rarity seeks a brooch that Applejack notes looks no different than the one she's currently wearing. Tensions rise as the two ponies argue over each other's prospective trades.

Meanwhile, Pinkie Pie stops Twilight from trading away all her books for a young filly's broken quill, enforcing the rule of the Traders Exchange that a trade is only fair if both ponies end up with something they want. Because she doesn't have any plans to trade her own possessions, Pinkie decides to help keep Twilight from making the same mistake and sets up a booth to promote the books as "official princess merchandise", which draws in a large crowd of ponies.

Rainbow Dash and Fluttershy glue the crystal chalice back together and bring it to the antique chicken trader, hoping he won't notice its condition. The trader accepts and smashes the chalice with a hammer to finish a broken glass mosaic. Realizing they don't know what kind of chicken the lamp trader wants, Rainbow Dash sends Fluttershy to check while she remains by the chicken stand to keep other buyers away. The Pegasi fly over Applejack and Rarity, who are arguing for the other to get what she wants to prove themselves the better friend. Upon returning to the lamp stand with the antique chicken in tow, Rainbow and Fluttershy discover that Stellar Eclipse has gone on break, frustrating Rainbow Dash.

Back at Twilight's stand, Pinkie becomes something of an auctioneer and hypes up Twilight's books to the crowd of ponies. Twilight becomes uncomfortable with the attention, stating that no one should trade for her books simply because she's a princess. Pinkie acknowledges Twilight's feelings but proceeds to mention to the crowd that the books were given to Twilight by Princess Celestia, exciting the crowd even more.

Finally, Rainbow Dash and Fluttershy make the exchange for the orthros and make their way to the Daring Do stand; the two pass Applejack and Rarity along the way, who continue to bicker. The Pegasi find their path blocked by a crowd of ponies and see the Daring Do collector beginning to pack away her untraded goods for the day. Fluttershy remembers her bear call and uses it to scare the entire crowd away. In their haste to reach the stand, Fluttershy drops her bear call, which is lost among the returning crowd.

When the Pegasi finally reach the stand, the Daring Do collector tells them she no longer wants the orthros as she is frightened of the vicious creature, to Rainbow's outrage. Fluttershy asks the collector to reconsider, demonstrating her expertise at taming the canine. The collector agrees to give Rainbow the book on the condition that Fluttershy stays in Manehattan with them to help train the orthros. Fluttershy reasons she would need to leave Ponyville for countless moons but reluctantly agrees for Rainbow's sake. Rainbow eagerly makes the deal and claims the book as her own, only to realize moments later that she has just traded away her friend.

Pinkie continues to promote Twilight's books, especially the "princess" aspect, and is about to make a sale until she mentions that the books made Twilight the princess she is. Realizing they have nothing to match such value, the ponies disperse. Twilight herself also realizes how much the books mean to her, as they—like Pinkie said—made her who she is. Suddenly, Rainbow Dash zooms onto the scene and pleads for Twilight to exert her princess authority and declare a trade unfair.

Twilight presides over a small trial to decide the fairness of the trade; because Rainbow Dash said the trade was fair, her hooves are tied. Rainbow Dash argues that the trade cannot be fair because, though she wanted the book more than anything, nothing is worth more to her than a friend. The Daring Do collector is moved by Rainbow's words and calls the trade off. Rainbow Dash returns the book to the collector, and Twilight declares both the trial and the Rainbow Falls Traders Exchange closed.

In the end, Spike turns out to be the only one of Twilight's friends to walk away from the Exchange with an uninterrupted trade.

On the train ride back to Ponyville, Rarity gives Applejack a different pie tin that she was able to trade for. In return, Applejack gives Rarity a jeweled barrette that she traded her half of their stash for. When Pinkie Pie asks about the orthros, Rainbow Dash says she traded it for a bird whistle for Fluttershy. As consolation for giving up the first-edition Daring Do book, Twilight gives Rainbow her old paperback copy of The Sapphire Statue. Rainbow cherishes the gift even more than the first-edition because she can read it with all of her friends.

Twilight Sparkle: I'm sure none of the other ponies will even notice I'm here.
[crowd cheering]
Crowd Pony 1: Wow, look over there, a princess!
Crowd Pony 2: Oh, this is amazing!
Applejack: Could be wrong, but I think they might've noticed.

Fluttershy: But, but how is Rainbow Dash going to get the book she really wants?
Daring Do Collector: She's not.

Rainbow Dash: A whole stand filled with Discord-shaped lamps? Seriously?!
Fluttershy: They really do have everything at the Traders Exchange.

Pinkie Pie: According to the rules of the Exchange, a trade is only fair if both ponies end up with something they want. You can't break the rules! Did anypony see you do it? I don't think anypony saw! [to filly] But you're not gonna say anything, are you?! Haha, I'm just kidding! Or am I?! Sometimes I can't even tell!

Pinkie Pie: Hey, everypony, step right up! Do not walk! Gallop over here for your chance to trade for authentic, one-of-a-kind, official princess merchandise!

Pinkie Pie: These books made Twilight the princess she is. Before that, she was nothing – a big, fat zero!
Twilight Sparkle: Hey!
Pinkie Pie: Then she read these books, and voila! Princess!

Applejack: No, I insist. You go fetch what you want, 'cause that's the kind of tried and true friend I am.
Rarity: I am way too generous to let you out-friend me like that!

Rainbow Dash: I did want that book, a lot. I said I wanted it more than anything in all of Equestria. But there's no thing that's worth as much to me as a friend. I might have forgotten that for a little bit, but it's true. Which means there's no way this trade can be fair!
Daring Do Collector: Oh, come on, that's- [tearing up] the sweetest thing I've ever heard! 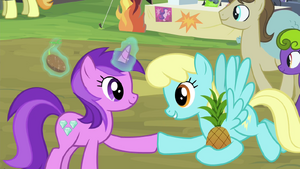