Even Rainbow Falls has its own train station.

Who should arrive unto the platform but our dearest six pony friends.

Too early for Pinkie Pie shenanigans?

"There always has to be a princess at the Exchange."

"Last year was Princess Cadance, this year it's me. It's just a formality." (You never know what happens if you enter the tunnel.)

"I'm sure none of the other ponies will even notice I'm here."

Get used to it Twilight, you're royalty now.

The Princess cometh at the Rainbow Falls Traders Exchange!

"I think they might've noticed."

Better get used to it.

Smile and wave.
Add a photo to this gallery

Sure is a large Traders' Exchange market.

Something about this trinket reminds her of home.

Omigosh, this poster is amazing.

"All I'm supposed to do is settle disagreements...."

Don't expect anypony to treat me as anything special.

Excuse me, Twilight, can I have an autograph?

Are they being serious?

Yes, they're being serious.

"I did want to trade this bear call for a bird whistle..."

"Did you say vintage?"

"I know what you mean, Rarity."

"Why don't we pool our trade stashes?"

Those two ponies in the background look familiar...

I don't know. It still looks like the title is saying "Sapphire Stone," not "Statue".

Are those teddy bears on her flank?

Fainting over a book, Rainbow Dash?

Fluttershy thinks this is cute?! Yikes!

Rainbow's face says it all!

"You're not gonna believe it!"

Wha? She wants a brooch identical to this one?

Where have we seen this before?

How can she tell the difference?

Uh, which one was on the right?

They're both exactly alike!

Ah reckon Ah oughta be happier Ah'm gettin' so many close-ups in this here episode.

Well, she definitely has a point about a tin that cooks pies mere seconds faster.

Now they're mad over a couple of pointless vintage items.
Add a photo to this gallery

Well, they're cute when they're getting their belly rubbed!

Why does that stallion look familiar?

"I'll give it to you straight."

"Watch out for the lamp!"

"I could use another lamp."

*breathes* "We need a crystal chalice..."

"I could use a slightly rusty old horseshoe."

But where are we going to find a rusty old...?

"Aaaaaaaaarrrrrrrrrrrggggggghhhh!!!!!"
Add a photo to this gallery

Is this The Muffin Queen's little princess, perhaps?

"What are you doing?"

"Do you reeeeaaaaally want that?"

Pinkie, get off of her!

"What are you talking about?"

"But you're not going to say anything, are ya?"

Again with the mustache!

Pinkie has gone Flam on Twilight. Too bad no pony's there to play Flim.

The chalice is fixed - sort of.

Boy! Rainbow is a mess!

Okay, now did this slip past the censor?

Too late for censorship.

"He didn't tell us what kind he wanted."

Fluttershy's still struggling with the shyness.

A genorosity-off? That's a new one!

"I know you're not more important than anypony!"

"Double Princess!!" The crowns have been doubled!

Ugh! Pinkie!
Add a photo to this gallery

Sad puppy dog eyes have little effect on this trader.

This one? Couldn't they have gotten the first one they showed in this episode?

disgusting, Rainbow be sure to take a bath when you get home!

Rainbow, Fluttershy, and Orthros in background.

It appears these two are at an impasse.

Oh no! We gotta hurry!

AUGH!! Too much traffic!

Fluttershy's making good use of her bear whistle she got to trade.

Wait! I dropped my bear call!

Fortunately, Fluttershy is patient with her friend.
Add a photo to this gallery

Fluttershy gets traded away

Stellar Eclipse with the Discord lamp.

"I don't want an orthros anymore."

Fainting over a book... again.

Only this time, it's more understandable.

Who are you calling crazy?!

They won her over!

I guess some pets do resemble their owners...more or less.

Uh-oh! An add to the trade!

Rainbow's not even paying attention to what she just said.

Yep, she definitely doesn't know what she just did.

"What did I do?!"
Add a photo to this gallery

Twilight realizing just how special her books are.

Was she really going to trade that baby?

"These books aren't that great!"

One of the books from Spike at Your Service.

She got that during Friendship is Magic, part 1?

Twilight, I made a serious mistake!

Oh my!
Add a photo to this gallery

Court is now in session!

"You said it was a fair trade."

Rainbow making a speech about friendship.

"There's no way this trade can be fair."

"...the sweetest thing I've ever heard!"

Dashie and Flutters hugging each other.

Looks like Spike also got a fair trade.
Add a photo to this gallery

Which of them is the better friend?

"You both gave up something you wanted so that you can get something for each other!"

"I traded it for something way better!"

A bird is on a hoof.

Twilight helping Rainbow Dash to complete her collection (sort of).

Fluttershy and Rainbow Dash with their respective traded gifts.

once again, a group hug always is a nice finish :)
Add a photo to this gallery 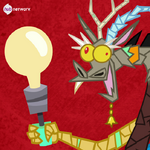 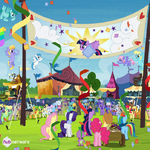 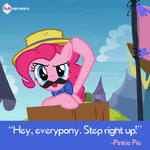 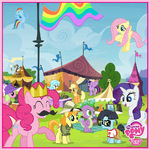 Add a photo to this gallery
Retrieved from "https://mlp.fandom.com/wiki/Trade_Ya!/Gallery?oldid=2195707"
Community content is available under CC-BY-SA unless otherwise noted.