Tree Hugger is a female Earth pony who first appears in the season five episode Make New Friends but Keep Discord. She is Fluttershy's friend and guest to the Grand Galloping Gala. Her demeanor and affectations are reminiscent of the hippie subculture of the 1960s.

Tree Hugger shares her color scheme and cutie mark with S06E07 Unnamed Earth Mare #1 and her design with an unnamed mare in My Little Pony Micro-Series Issue #3.

In the original script for Make New Friends but Keep Discord, she was based more off of Martha Stewart rather than being based off the hippie culture.[4]

Tree Hugger was previewed in one of the animation images shown at Ponycon NYC on February 16, 2015.[5]

Jim Miller has assumed that Tree Hugger and "Geronimo" are siblings.[6]

Tree Hugger first appears in the season five episode Make New Friends but Keep Discord. Fluttershy states that she met her on a trip to see the Breezies and that she's a member of the Equestrian Society for the Preservation of Rare Creatures. When Fluttershy mentions to Discord that she plans to take Tree Hugger with her to the Grand Galloping Gala, it upsets Discord.

Later in the episode, Discord meets Tree Hugger in person, and she addresses him in a considerably mellow manner, using such words as "radical" and "righteous."

At the Gala proper, Fluttershy and Tree Hugger spend much of the evening in each other's company, much to Discord's irritation. He tries to come between the two, but Tree Hugger plays off his attempts with her usual composure. When the Smooze covers everything in slime and threatens to ruin the Gala, Tree Hugger calms him with "auditory therapy" – involving mainly "om" sounds and high-pitched whinnying – and the ponies commend her.

Fed up with all the attention Tree Hugger is receiving, Discord nearly banishes her to another dimension, but Fluttershy stops him. In the end, Discord apologizes to Tree Hugger for his jealousy, and the two start over on friendlier terms.

In season six, Tree Hugger poses for an art class in On Your Marks.

In My Little Pony The Movie, Tree Hugger watches Harry give a bear hug to Fluttershy, Angel Bunny, Twilight Sparkle, and Spike during We Got This Together.

A sewn representation of Tree Hugger is shown on My Little Pony: Friendship is Magic Issue #43 cover RI.

Tree Hugger appears in the audience for opening night of The Singing Stallion in Discord and the Ponyville Players Dramarama.

Tree Hugger appears in a photograph in episode 3 of Baby Flurry Heart's Heartfelt Scrapbook, "All About Alicorns".

Tree Hugger is a character in Gameloft's mobile game. The game's description of her states, "Tree Hugger's totally radical and way cool! She's a pony whose vibe we can dig!"

TREE HUGGER is a member of the Equestrian Society for the Preservation of Rare Creatures, and was Fluttershy's guest to the Grand Galloping Gala. She likes nature just as much as Fluttershy. Their friendship initially makes Discord incredibly jealous, but they all become friends.

"Radical to meet you. Really digging your vibe."
— To Discord in Make New Friends but Keep Discord

"The aura coming off the waterfall was so alive! So, like, magic manifestation."
— Make New Friends but Keep Discord

"I meet a lot of different creatures, each one of them perfect and unique."
— Make New Friends but Keep Discord

"Oh, man. You're really bumming me out. Can you just, like, lower your voice a skosh?"
— To Discord in Make New Friends but Keep Discord

"Um, I need like a few minutes to clear out my chakras before I can hug you from a place of authenticity."
— Make New Friends but Keep Discord

"The animals just, like, feel my groove, and come to me, you know?"
— Enterplay collectible card game High Magic card #146 UR of Tree Hugger 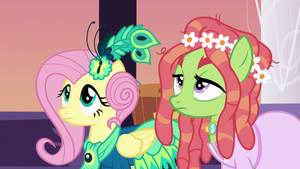 Retrieved from "https://mlp.fandom.com/wiki/Tree_Hugger?oldid=2177950"
Community content is available under CC-BY-SA unless otherwise noted.