Trenderhoof is a male unicorn pony who appears in the episode Simple Ways. He is a traveling writer who writes for Equestria magazines.

According to Mike Vogel, when the episode Simple Ways was initially pitched, Trenderhoof was described as the "Anthony Bourdain of Equestria".[3]

Trenderhoof has the same body type and eye color as "Free Throw", "Uptown Clover", and S06E17 Unnamed Earth Stallion #6, the same body type as "Natural Deduction" and "Mustafa Combe", a similar body type to "Sprig Hooffield", S07E10 Unnamed Earth Stallion #4, and Chancellor Neighsay, a similar color scheme to Crusoe Palm and "Haakim", and a cutie mark very similar to the design on the legwear that Twilight Sparkle usually wears during her visits to the human world.

Trenderhoof is first mentioned by Rarity as being an Equestria travel writer. She credits him with making Las Pegasus a major tourist destination and with discovering Trottingham cuisine, thus making it fashionable. She has a fixation on him to the point of having a shrine of memorabilia, including various posters and what appears to be a tuft of his hair in a vacuum flask.

Trenderhoof arrives in Ponyville by train to attend the Ponyville Days festival. As Rarity shows him around town, he claims that his skill is taking the mundane, simple, and unappreciated and making it into something relatable to other ponies.

When the two arrive at Sweet Apple Acres, Trenderhoof is immediately taken by the scenery and "authenticity" of the farm. He subsequently becomes smitten with Applejack, calling her the pony of his dreams and becoming obsessed with her. His fixation and attempts to impress her, however, fall short. He fails to notice Applejack's complete lack of interest in him as well as Rarity's own infatuation toward him.

Trenderhoof later goes so far as to claim he wishes to move to Ponyville and live on the farm with Applejack. After Applejack politely turns him down, Rarity convinces him to be true to himself much the same way she learned to be, having gone through the same experience in her attempts to woo him. At the festival, Trenderhoof dances with Granny Smith and gives Rarity a rose during the fashion show.

Although he is a famous journalist, Trenderhoof is not well known in some circles of ponies; none of Rarity's friends had heard of him prior to her mention of him.

In A Fine Line, Trenderhoof briefly appears in one of the clothing stores at the Canterlot Mall with "Taffy Shade".

On My Little Pony: Friendship is Magic Issue #52 pages 10-11, Trenderhoof appears as an employee for the Canterlot Daily News.

Trenderhoof appears in an illustration in episode 3 of Rarity's Peek Behind the Boutique, "Customer Critiques"

Trenderhoof is an available character in Gameloft's mobile game. He was added to the iOS version of the game on March 25, 2014 and the Android version on April 3, 2014. His description reads "Discoverer of destinations, explorer of the unexplored and really, REALLY handsome, Trenderhoof is one of Equestria's greatest travel writers." He also serves as the boss of the "Freedom of the Press" event, in which Applejack confronts him for writing an editorial slandering Sweet Apple Acres.

In the Crystal Games expansion set of Enterplay's collectible card game, Trenderhoof is featured on card #75 U. He is also featured on Absolute Discord card #199 UR, Equestrian Odysseys card #34 C, and High Magic card #76 U.

"Please, call me 'Trend'."
— To Rarity, Simple Ways
"I've seen a lot in my travels, but I've never beheld such beauty. Applejack... The pony of my dreams..."
— Simple Ways
"I once had an apple so rare, they thought it was extinct. I ate four of them."
— Simple Ways
"Without farm life, there'd be such disparity
These thoughts I think with great clarity
Apples high to the sky
She's the one of my eye
That fruit-hauling pony named... Applejack!"
— Simple Ways
"Well, this is awkward."
— Simple Ways 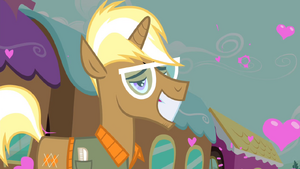 Retrieved from "https://mlp.fandom.com/wiki/Trenderhoof?oldid=2143872"
Community content is available under CC-BY-SA unless otherwise noted.