Triple Threat is the fifteenth episode of season seven of My Little Pony Friendship is Magic and the one hundred and fifty-eighth overall.

When Spike accidentally invites Ember and Thorax to Ponyville on the same day, he believes they won't get along and tries to keep them apart.

This episode was initially scheduled to premiere on Canada's Treehouse TV channel on June 4, 2017,[1] but was later replaced by a repeat of Rock Solid Friendship.

The episode begins in Ponyville, where Spike—official friendship ambassador to the dragons—is overseeing preparations for Ember's arrival. Because of the dragons' inherently competitive nature, they are having difficulty embracing friendship, so Spike has invited Ember to Ponyville to give her advice. Despite Spike's nervousness, Twilight Sparkle and Starlight Glimmer are certain that he can handle it.

Just then, Thorax appears, and Spike remembers that he also invited him to Ponyville, not realizing that he'd extended invitations to both the Dragon Lord and the leader of the changelings on the same day. Spike is afraid that Ember's aggressive and intimidating personality will clash with Thorax's kind and sensitive nature to the point that it will spark a conflict between dragons and changelings. As Spike talks to Thorax about his recent leadership troubles, he sees Ember approaching from the sky. He urges Thorax toward the Castle of Friendship so Twilight can give him a tour.

Meanwhile, Spike and Starlight welcome Ember to town, but she immediately scares some townsfolk with her fire breath and aversion to bright colors. She asks where Twilight is, and Spike inadvertently mentions that she's at her castle.

At the castle, Spike makes certain that the coast is clear before inviting Ember inside. He treats her to a welcoming banquet of treats, but Ember mostly eats the food bowls and castle walls made of gems. As Ember helps herself to the "banquet", Spike excuses himself. Meanwhile, Twilight shows Thorax her favorite chairs in the castle library. Spike enters and suddenly pulls Twilight away, informing her that Ember is in the castle.

Because Ember wants to talk to Twilight and Thorax wants to talk to Spike, Spike suggests that he and Twilight switch places. All of a sudden, the scales on Spike's head start to glow, and a holographic image of Spike appears floating over the Cutie Map.

Starlight enters to see the map summoning Spike to Ponyville, and Spike starts to panic. He asks Twilight and Starlight to keep Ember and Thorax distracted and away from each other while he seeks out the friendship problem he's been summoned to solve. While walking through town, he finds Lyra Heartstrings and Sweetie Drops having an argument over cupcakes.

Never the twain shall meet

Back in the castle dining hall, Twilight meets with Ember, who—despite the banquet that was prepared for her—feels like she is being avoided. Twilight assures her that everyone is just getting everything ready for her welcoming party later on, and she offers to show Ember around town. Meanwhile, Starlight returns to Thorax in the library, tells him that Twilight and Spike are busy with paperwork, and offers to take him to lunch. Thorax accepts, but he is disappointed over not being able to talk with Spike.

In town, Spike successfully resolves Lyra and Sweetie Drops' disagreement, but his scales don't glow, meaning he hasn't completed his friendship mission. With Starlight and Thorax having lunch nearby, Thorax takes the opportunity to talk to Spike, and he mentions having trouble dealing with a renegade group of changelings who still feed on love. Elsewhere, Ember tries to make friends with other ponies, but her boldness and aggressiveness scares them away. Twilight and Starlight try to help, but Ember accidentally angers them when she fails to tell them apart.

Back at the cafe, Spike zones out in the middle of Thorax's rambling and sees Crusoe Palm and "Rainbow Stars" arguing over a table seat. Spike helps them resolve their issue, but his scales still don't glow. Thorax is impressed by Spike's conflict resolution skills and asks for advice on how to deal his own problems. However, before Spike can offer any, he notices Ember approaching and quickly excuses himself to join her. Ember gets upset at Spike for avoiding her all day, but Spike assures her that he hasn't. Feeling accused of being a liar, Ember loudly snaps at him. Thorax hears this and jumps to Spike's defense, transforming into a ferocious bear and charging at Ember.

"My worst fears are happening!"
— Spike

Before Ember and Thorax attack each other, Spike yells for them to stop, and they realize that they are both trying to protect Spike from harm. Spike finally admits that he accidentally invited them to Ponyville on the same day and has been trying to keep them apart for fear that they wouldn't get along. Ember gets offended that Spike thinks she's so bad at friendship that Thorax wouldn't like her and flies off. Likewise, Thorax gets upset due to Spike reinforcing his personality and leadership issues and also flies away. Spike laments over having driven both of his newest friends away.

Ember meets with Thorax next to Saddle Lake, and Thorax admits he doesn't want to go home because of his recent leadership troubles. Ember is surprised to learn that Thorax is a leader and tells him to be more assertive, reminding him of how he turned into a bear to defend Spike. When Thorax asks Ember about her own problems, she says she doesn't want to talk about it. Thorax urges her to do so, explaining that talking things out is more effective than the dragons' usual method of winning duels and humiliating others.

Ember and Thorax take each other's advice and decide to confront Spike once more.

As Spike and his friends take down the town decorations, Ember and Thorax appear before him. Using the advice they gave one another, Ember talks about her feelings regarding the day's events, and Thorax assertively scolds Spike for his blundering. Spike fully accepts responsibility for his mistakes and asks for his friends' forgiveness. Ember and Thorax forgive Spike, and Thorax cements the three's friendship with a group hug, much to Ember's discomfort. With this, Spike's scales glow, signifying a successful friendship mission.

Some time later, a ceremony is held in the Ponyville town square, where Spike extends the flame of friendship to both Ember and Thorax, uniting dragons and changelings in harmony. As the ponies cheer and confetti rains down, Ember sneezes and accidentally melts an ice sculpture with her fire breath.

"You should have more things made of rocks."
— Princess Ember

Twilight Sparkle: Spike, everything looks great! You're getting yourself worked up for no reason.
Spike: I have lots of reasons. In fact, I wrote them down.
Starlight Glimmer: [sighs] You've been hanging around Twilight for too long.

Spike: So, Thorax, everything good with you?
Thorax: Well, honestly, no. Not really. I have indigestion. I'm not sure if it's the new diet or stress or maybe it's both.
Spike: No!
Thorax: Yeah, it really could be both. And it might be affecting my sleeping, too. I'm a real tosser and turner.

Spike: Dragon Lord Ember, as the Official Equestrian Friendship Ambassador for the Dragon Lands and for Ponyville, I, Spike of Ponyville, welcome you to... Ponyville. [quietly, to himself] I gotta work on my official speech.

Twilight Sparkle: So this is my comfy chair for fictional reads. [grunts] This is my studying chair because the hard back keeps me awake.

Spike: The map is calling me?!
Twilight Sparkle: Oh, amazing! The map is really reaching out! [beat] Not a good time? I get it.

Twilight Sparkle: How's your trip to Ponyville so far?
Ember: Well, I'm certainly learning a lot about friendship. I had no idea it was polite to decorate your walls in your friends' favorite foods!
Twilight Sparkle: [laughs nervously] Oh my.

Ember: I'm just saying you're both purple ponies with purple hair. You both have cutie marks with sparkly things.
Starlight Glimmer: [chuckles] Mine's more of a glimmer. Heh.
Ember: How is that different? 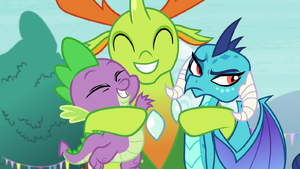