Jack Pot, or Jackpot; 'Spectacle', or 'Showcase'; and an unnamed unicorn mare are unicorn ponies who appear as Trixie's family members in the season eight episode Grannies Gone Wild, the season nine episode Between Dark and Dawn, and the IDW comics.

When about asked Trixie's mother's name on Twitter in March 2016, My Little Pony: Friendship is Magic Issue #40 writer Ted Anderson replied, "Maybe something with 'Spectacle' or 'Showcase.' Connects to the 'tricks' idea of her daughter's name."[1]

In response to questions regarding Jack Pot's relation to Trixie on Twitter, director Jim Miller and story editor Nicole Dubuc mainly replied with "😉".[2][3][4][5][6] Miller also posited, "The question is, does HE know he’s Trixie’s dad?"[7] He later clarified, "Yes, we were implying that he was indeed TX's dad. It's not explicitly stated, and Hasbro may decide to change their minds down the line somewhere, but we thought it was a fun nod to her parentage, and made..."[8] "...sense that he was a possibly washed up Vegas style stage magician with a penchant for older ladies. Whether or not he's aware he has a daughter is up for debate."[9]

In the season eight episode Grannies Gone Wild, Trixie's father Jack Pot appears as a stage magician at Flim and Flam's Las Pegasus resort hotel alongside fellow magician Big Bucks. They first appear in DJ Pon-3's dance club checking out Granny Smith, Auntie Applesauce, Apple Rose, and Goldie Delicious on the dance floor. After a bit of flirting, they invite the "Gold Horseshoe Gals" to their magic show at the Pone Fantastique theater later that evening, promising to save them a spot on stage.

Later, during Jack Pot and Big Bucks' magic show, they invite the grannies onto the stage to serve as assistants in their signature magic trick, the Splashtastic Escape. However, Rainbow Dash interrupts the trick and knocks the magicians' water tank over. In an effort to save face, Jack Pot and Big Bucks convince the audience that it was all part of the show, and they run away using one of Jack Pot's smoke bombs.

In the season nine episode Between Dark and Dawn, Jack Pot appears alongside Big Bucks again giving a magic show, with Princess Celestia and Princess Luna in the audience.

In My Little Pony: Friendship is Magic Issue #40, Trixie's mother appears on page 4 dropping her daughter off at her first day of school at Princess Celestia's School for Gifted Unicorns. In My Little Pony: FIENDship is Magic Issue #3, an unnamed ancestor of Trixie's appears as one of the participants in a music competition held in ancient Canterlot.

A blurb on page 169 of The Ultimate Guide: All the Fun, Facts and Magic of My Little Pony reads, "DID YOU KNOW? Trixie's father, Jackpot, was a famous stage magician. His most impressive trick was the Splashtastic Escape, performed with his friend Big Bucks. It's no surprise that Trixie loves magic shows too!"

Jack Pot is a character in Gameloft's mobile game, and serves as a helper during the "Viva La Pinkie Pie" event. His bio states, "Stage Magician and Las Pegasus headliner, with his partner Big Bucks. Magic may run in his family..."

"You little fillies have got some smooth moves!"
— Jack Pot, Grannies Gone Wild

"They will make a splashtastic escape using only the instructions we give them... with our minds."
— Jack Pot, Grannies Gone Wild 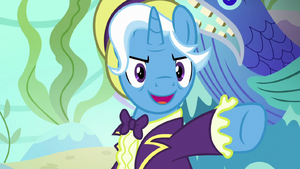