Trixie makes five appearances in My Little Pony Equestria Girls. She first appears in a wide shot of the school cafeteria. Her most prominent scene in the film is in front of a vending machine, dramatically declaring "The Great and Powerful Trixie... needs some peanut butter crackers." She appears in the cafeteria again during the Cafeteria Song. Towards the end of the film, Twilight Sparkle and her friends run past her by the same vending machine as before. She appears once more dancing at the Fall Formal.

Trixie serves as a secondary antagonist in My Little Pony Equestria Girls: Rainbow Rocks. She first appears with her bandmates in the gym painting a sign for the CHS Musical Showcase. She is among the students who sneer at Sunset Shimmer when Principal Celestia brings up the Fall Formal. During Better Than Ever, she photobombs Photo Finish's photo of Big McIntosh. She also appears in the cafeteria during the Dazzlings' song.

When the Dazzlings manipulate Principal Celestia and Vice Principal Luna into advancing the Rainbooms to the finals, Trixie feels she's been cheated, which the Dazzlings use to their advantage by encouraging Trixie to get rid of the Rainbooms. Trixie ambushes them during their rehearsal and drops them through the stage's trap door to the basement underneath, locking them within. With the Rainbooms apparently having forfeited, Trixie and her band are able to play in their place.

Even after the Dazzlings are defeated and their spell is broken, Trixie still declares herself the greatest musician at Canterlot High and attempts to escape via smoke bomb. She is last seen trying to climb over the back of the bleachers as part of her escape, only to lose her balance and fall off.

Trixie briefly appears in the background in Music to My Ears, sitting at a table as DJ Pon-3 passes by. She plays a major role in the animated short Guitar Centered, where she duels Rainbow Dash in a "shred-off" over a coveted double-necked guitar at a music store. Trixie loses the duel when Rainbow Dash suddenly ponies up and blows her away with a sonic rainboom-like effect. However, Trixie is allowed the guitar when Rainbow Dash decides she'd rather buy the guitar she used in their fight. She gloats over her "victory" before discovering to her dismay that the guitar costs $12,000. Trixie appears briefly alongside other Canterlot High School students attending the Rainbooms' concert in Shake Your Tail. In Perfect Day for Fun, Trixie appears at the Canterlot High School carnival, watching the Rainbooms' concert and posing for a smartphone photo. In the encore short Friendship Through the Ages, Trixie partially appears during Rainbow Dash's verse.

Trixie appears as a camper at Camp Everfree with other CHS students. Some time after being told the legend of Gaea Everfree, she attempts to summon the ancient forest spirit. When Gloriosa Daisy becomes corrupted by the power of the magic geodes and appears at the camp, Trixie is the first to mistakenly identify her as Gaea Everfree. She later helps the other campers in preparing the Camp Everfree fundraising ball.

The Get the Show on the Road title card background text includes "TRX" horizontally flipped. Trixie makes a background appearance sitting in the school cafeteria in Epic Fails. In Good Vibes, Flash Sentry helps her with a heavy load of magic props at the Canterlot Mall, and she helps Fluttershy find a missing Angel Bunny.

In Queen of Clubs, Trixie appears as a member of the CHS role-playng game club. In Overpowered, Trixie walks through the school halls singing her own praises in her mind. In A Little Birdie Told Me, she overhears Fluttershy talking with some birds during a pop quiz and accuses her of cheating. After Fluttershy proves her innocence, Trixie asks the same birds to tutor her in trigonometry.

In the second season short Street Magic with Trixie!, she attempts to perform a magic act for a city crowd with Spike as her assistant when all of her supplies mysteriously float. Trixie claims it to be her own magic, unaware it is actually Twilight Sparkle doing the levitation. In Best in Show: The Pre-Show, Trixie is seen attending the first annual Canterlot High pet show with her pet teacup poodle. In the following short, they appear as participation winners. In Schedule Swap, she appears sleeping in an art class and later has lunch in the school cafeteria. In I'm on a Yacht, she attends the pool party aboard the Luxe Deluxe cruise ship. In Run to Break Free, she appears in a CHS hallway dropping cards when Snips bumps into her while trying to catch a paper airplane thrown by Snails.

In Best Trends Forever, Trixie appears in two of the three endings emulating the trends stated by Rarity. She is also the focus of one of the endings of Rarity Investigates: The Case of the Bedazzled Boot, in which she mentally squares off against Rarity as a suspect in her investigation. In Opening Night, she appears in the school play audience. In the Rarity and Applejack endings of Happily Ever After Party, Trixie appears at the school play after-party.

Trixie appears as a central character in the hour-long special Forgotten Friendship. She pushes for Sunset Shimmer and her friends on the school yearbook committee to put her in the yearbook's "Superlatives" section as "Greatest and Most Powerfulest". She later helps Sunset solve the mystery of her friends' memories being erased after she is eliminated as a suspect.

In the hour-long special Rollercoaster of Friendship, Trixie makes several background appearances as an Equestria Land theme park patron, running out of the haunted house, navigating the park, attending the light parade, and riding the bumper cars.

Trixie appears as the magic act for the Luxe Deluxe cruise. She is first seen after Rainbow Dash asks if anyone has seen "bad magic", and she is pointed to the theatre. She later appears attempting a trick with water and a vase as the ship starts to sink, flooding the area, and believes she caused it by being "too powerful". She is eventually rescued by the Equestria Girls along with the ship's other passengers.

Trixie appears waiting in the security line at the Starswirled Music Festival talking to Bulk Biceps and Derpy, and appears again at the PostCrush concert.

In the Holidays Unwrapped special, Trixie takes part in the big snowball fight. After being brought down by a number of snowballs, she plays along by telling Fluttershy she's "so cold".

According to a "Canterlot High Pop Quiz" from Twilight Sparkle in a post by Hasbro's My Little Pony Facebook page on May 21, 2014, Trixie[1] "is always hanging out by the vending machine".[2]

In the My Little Pony: Equestria Girls Holiday Special, Trixie appears on page 32. Sunset Shimmer confronts her about the online blabbermouth known as "Anon-a-Miss"; Trixie denies being Anon-a-Miss but commends her for stirring up Canterlot High School.

Trixie is featured as an antagonist in the screenplay novelizations of the first eight Rainbow Rocks animated shorts and the second film.

Trixie appears in the chapter book Sunset Shimmer's Time to Shine. As the Sonic Rainbooms organize a fashion show to raise money for the school, Trixie spreads rumors around Canterlot High to keep students from buying tickets, partly in an attempt to break up the Rainbooms so that Sunset would be her friend instead. Sunset ultimately reaches out to her and enlists her help in putting the fashion show together.

Trixie is in the novelization of the third film, where she takes Derpy's place in the games. Similar to Derpy's role in the film, Trixie is eliminated in the chemistry round of the Academic Decathlon when her concoction explodes in her face.

In Twilight's Sparkly Sleepover Surprise, Trixie briefly appears in the epilogue chapter, "No One Gets Left Out", remarking that Sci-Twi has more friends than anyone at Canterlot High. Sci-Twi then offers to hang out with her, which she accepts.

Appearing – and disappearing – in a puff of smoke, Trixie’s an aspiring magician who never fails to fascinate. As guitarist for The Illusions, she’s hoping to pull off the ultimate trick – and win the battle.

Trixie Lulamoon is known for her stylish entrances and exits! She's not one to turn down a challenge and miss an opportunity to shine. This rockin' magician was born for the spotlight![3]

Much like her pony counterpart, Trixie has a very theatrical and egotistical personality, often referring to herself as the "Great and Powerful Trixie" and speaking in the third person. In one instance, she calls herself "the most talented girl at Canterlot High," and she even considers the Rainbooms defeating the Dazzlings a less-than-impressive feat.

Similar to her pony counterpart falling victim to the Alicorn Amulet, Trixie's personality traits are negatively augmented by the Dazzlings' siren magic in the second film. She argues frequently with her fellow students—particularly Flash Sentry—she openly ridicules Sunset Shimmer, and she resorts to sabotage to remove the Rainbooms from the competition.

In My Little Pony Equestria Girls: Forgotten Friendship, Trixie sympathizes with Sunset Shimmer's public-image dilemma and admits to wanting to change how she is perceived by others.

In the screenplay novelization of the Rainbow Rocks animated shorts, Trixie displays a lot of self-centeredness, frequently boasting about her own talents and disparaging those of the Rainbooms. In the My Little Pony: Equestria Girls Holiday Special, she takes delight in the mischief that Anon-a-Miss causes at Canterlot High. In Sunset Shimmer's Time to Shine, however, the trouble she causes for Sunset Shimmer are revealed to be out of jealousy and a desire to be Sunset's friend.

"The Great and Powerful Trixie always wins in the end!"
— Guitar Centered

"Not if the Great and Powerful Trrrrrixie has anything to do with it!"
— My Little Pony Equestria Girls: Rainbow Rocks

"You're never gonna top that performance, "Rain-goons". You shouldn't be allowed to when you have such a big advantage over the rest of us."
— My Little Pony Equestria Girls: Rainbow Rocks

"The Great and Powerful Trixie is the most talented girl at Canterlot High. It is I who deserves to be in the finals. And I will not... be denied!"
— My Little Pony Equestria Girls: Rainbow Rocks

"You may have vanquished the Dazzlings, but you will never have the amazing, show-stopping ability of the Great and Powerful Trixie!"
— My Little Pony Equestria Girls: Rainbow Rocks

"Spirit, show yourself! The Great and Powerful Trixie commands it!"
— My Little Pony Equestria Girls: Legend of Everfree

"Just as I suspected! I was not voted "Greatest and Most Powerfullest"! Explain yourself!"
— My Little Pony Equestria Girls: Forgotten Friendship

"So you have this idea of who you're supposed to be, but no one at school sees you that way. Is that it? Trust me. I get it."
— My Little Pony Equestria Girls: Forgotten Friendship

"Maybe it's not good enough to not be mean to someone. Maybe you have to be nice."
— My Little Pony Equestria Girls: Forgotten Friendship

"She's stirred up this school more than Trixie ever could! Whoever she is, I'd like to thank her!"
— Referring to "Anon-a-Miss", My Little Pony: Equestria Girls Holiday Special

"A band? Did someone mention a band? I'm going to start a band and I'm going to be the star because the Great and Powerful Trixie is the most fantastic singer of all!"
— Equestria Girls: Rainbow Rocks

"Watch where you are going! The Great and Powerful Trixie does not like to have her feet stepped on!"
— Sunset Shimmer's Time to Shine

"Well, I thought maybe you'd stop being friends with the Sonic Rainbooms, and, well, then you and I could team up..."
— Sunset Shimmer's Time to Shine

"My stage style has to be as magical as my music!"
— Thought bubble, Rainbow Rocks doll packaging

"Get ready to rock, CANTERLOT HIGH— the great TRIXIE LULAMOON will amaze everyone with rockin' style like no other!"
— Thought bubble, Rainbow Rocks doll packaging 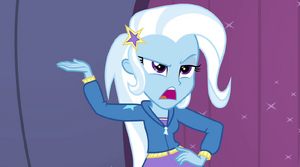 Retrieved from "https://mlp.fandom.com/wiki/Trixie_(EG)?oldid=2140113"
Community content is available under CC-BY-SA unless otherwise noted.