Trouble Shoes is a male Earth pony who first appears as a supporting character in the season five episode Appleoosa's Most Wanted. He is an Appleloosa rodeo clown and former outlaw. He is called Troubleshoes Clyde in some promotional material.

Trouble Shoes bears some conceptual similarity to G1 Woebegone and some similarities to a real Clydesdale horse.

According to Shoes' voice actor Jim Miller, Trouble Shoes is the largest pony designed for the television series;[3] his size does not appear to surpass that of Steel Buns, and he shares his body design with "Hammerhead McColt" and Rockhoof. Trouble Shoes as a colt was designed by Kora Kosicka.[4] Miller's performance as Trouble Shoes was influenced by Eeyore from Winnie-the-Pooh and Karl Childers from Sling Blade.[5]

Trouble Shoes is described by Sheriff Silverstar as a notorious outlaw, known for ruining rodeos in at least two towns in Equestria. Due to his size, he is known for leaving large hoofprints at the scenes of his crimes.

When Trouble Shoes' presence in Appleloosa threatens to cancel the Appleloosa Rodeo, Apple Bloom, Sweetie Belle, and Scootaloo set out to catch him so they can take part in the rodeo and possibly earn their cutie marks. At a remote cabin in the nearby woods, the fillies meet the tall yet klutzy Trouble Shoes and realize that he means no harm.

As Trouble Shoes shows the lost Crusaders the way back to Appleloosa, he tells them the story of how he got his cutie mark. When he was a colt, Trouble Shoes wanted to be a rodeo star, but due to his clumsiness, he kept publicly embarrassing himself. During his audition for rodeo school, he got his cutie mark—an upside-down horseshoe—and humiliated himself in front of the judges. Though he abandoned his dreams, Trouble Shoes still liked to watch the rodeo, but his bad luck caused mishaps every time, thus earning him a reputation as an outlaw.

Trouble Shoes is soon apprehended by Sheriff Silverstar and placed in jail. With the Crusaders' help, he escapes from jail, joins the Appleloosa Rodeo, and discovers his true calling as a rodeo clown. However, he is exposed when his clown makeup washes off, prompting the Crusaders to defend him and clear up the misunderstanding. After taking responsibility for the trouble his past mistakes have caused, Trouble Shoes is accepted by the ponies of Appleloosa, and he becomes a full-time rodeo clown.

Trouble Shoes appears through archive footage in Crusaders of the Lost Mark.

In The Last Problem, Trouble Shoes briefly appears in Applejack's group shot during The Magic of Friendship Grows.

Trouble Shoes appears as a colt in a photograph in episode 4 of Baby Flurry Heart's Heartfelt Scrapbook, "Cutie Mark Magic".

Trouble Shoes is a character in Gameloft's mobile game. The game's description of him states, "Klutzy, clumsy and a little bit awkward, bad luck never rests for Trouble Shoes!"

Trouble Shoes is featured in the "One Million Friends" poster on the My Little Pony Facebook page.

Trouble Shoes is referred to as "Troubleshoes Clyde" both in a May 4, 2015 post by Hasbro's My Little Pony Facebook page[6] and in official summaries of the episode Appleoosa's Most Wanted.

In the Enterplay collectible card game's expansion set Equestrian Odysseys, Trouble Shoes is featured on card #102 R, appears and is mentioned on card #112 C, and appears on card #190 U.

"I ain't gonna rise to greet y'all. Awfully rude, I reckon, but as you can see, I'm the fresh casualty of an unusually unfortunate circumstance. My lot in life, I suppose."
— Appleoosa's Most Wanted

"Upside-down horseshoe – bad luck. Follows me wherever I go like sour on old milk."
— Appleoosa's Most Wanted

"Wouldn't you know it? My lucky day."
— Appleoosa's Most Wanted

"Just my luck. I was hopin' you'd say no."
— In response to the Cutie Mark Crusaders wanting to hear his story, Appleoosa's Most Wanted

"I aim to clear that there hoop!"
— Appleoosa's Most Wanted and Enterplay collectible card game Equestrian Odysseys #102 R card of Trouble Shoes

"What she says is true. This here entertainin' y'all with my klutzin'? That's what I'm supposed to be doin'. I know it now. I didn't mean no harm, honest! I just ain't never loved nothin' like I love the rodeo. So I kept on sneakin' back and makin' a big old mess of things. Turns out I was just a-lookin' at my cutie mark all wrong."
— Appleoosa's Most Wanted

"If I done wrong, I'll see to it that I take my medicine and square my accounts."
— Appleoosa's Most Wanted 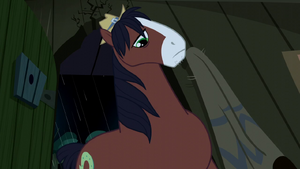