Truffle or Truffle Shuffle, also known as Teacher's Pet, is a background Earth pony colt with a gray coat, dark brown mane and tail, blue eyes, and a cutie mark of a knife and fork. He is not named in the series, but he is named "Truffle" sometimes with a trademark symbol and "TRUFFLESHUFFLE" in other media and merchandise.

Truffle first appears in Family Appreciation Day, sitting behind Apple Bloom and Diamond Tiara in the Ponyville Schoolhouse classroom. He later listens to Granny Smith's story about the founding of Ponyville and even later helps her sing to watering cans. In Hearts and Hooves Day, Truffle receives a Hearts and Hooves Day card from Twist and gives a card to Miss Cheerilee. In Ponyville Confidential, Truffle assists with the Foal Free Press and has speaking lines.

Truffle appears again in Simple Ways during the announcement of the Pony of Ceremonies. In Twilight Time, he appears among his classmates at several points in the episode, and in Inspiration Manifestation, he appears at the Foal and Filly Fair with Cheerilee.

Truffle appears at the beginning of The Cutie Map - Part 1, standing in front of the Friendship Rainbow Kingdom castle next to Cheerilee, and during various background pony shots in Slice of Life.

Truffle is one of the available playable characters in Gameloft's mobile game. He is referred to simply as "Teacher's Pet" in gameplay, but he is called "Truffle"[2] and "TRUFFLESHUFFLE"[3] in the game's code.

This little pony loves food more than anything, and he's got a knife and fork as a cutie mark!

"The Ponyville news stand wants to carry the Foal Free Press! Ponies keep coming by and asking for it!"
— Ponyville Confidential 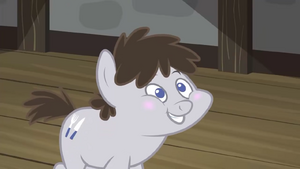