For the kingdom, see Castle of Friendship.

Twilight's Kingdom - Part 1 is the twenty-fifth episode of the fourth season of My Little Pony Friendship is Magic and the ninetieth episode overall. It is the first part of a two-part season finale. Along with Part 2 of the finale, these two are the final episodes to premiere on the Hub Network before its rebranding as Discovery Family Channel.

In this episode, Twilight Sparkle struggles with her sense of purpose as a princess when Celestia chooses Discord instead of her to help track down a new villain who has escaped from Tartarus.

Twilight Sparkle and her friends are back at the Crystal Empire to welcome the duke and duchess of Maretonia. Twilight is delighted that her friends are accompanying her, but she admits her duties amount to just a "smile and wave". When Pinkie Pie asks what's the matter, Twilight says she feels her role as a princess doesn't amount to much. The feeling is only made worse when, during the dignitaries' welcoming ceremony, all Twilight does is unveil a royal banner.

After saying goodbye to the dignitaries, Twilight asks Princesses Celestia, Luna, and Cadance if there's anything else she can do, but Cadance tells her their visit is already over. Twilight is disappointed that, compared to her fellow princesses of Equestria, her own role as a princess is unclear and she wants to have a purpose. Celestia, Luna and Cadance let Twilight know through a heartfelt song that her time "is coming soon" and that she'll play her part as a princess. Twilight is cheered up a little by their song and words of encouragement.

Meanwhile, in Canterlot, Rare Find walks through an alleyway while levitating a bucket of oranges. He encounters an individual in a cloak and apologizes for nearly bumping into him. The cloaked creature introduces himself as Lord Tirek and, with a menacing proclamation of taking "what should have been [his] long ago", consumes the unicorn's magic, causing the unicorn's eyes to lose their color and his cutie mark to vanish while making Tirek stronger.

Back in the Crystal Empire, Princess Celestia wakes up from her sleep in a startle, and Luna enters her bedroom. Celestia says she had a terrible dream. Luna, having witnessed her dream, tells her it was a vision. As Celestia gets out of bed, she forebodingly states "the stronger he becomes, the more we are all in danger".

Through a storybook, Celestia and Luna tell Twilight the history of Tirek: originally, he and his brother Scorpan came to Equestria from "a distant land" with the intent of stealing Equestrian magic. However, Scorpan came to appreciate the ponies' ways, and even befriended a young unicorn wizard. He pleaded with Tirek to abandon their plan, and when he refused, Scorpan alerted the princesses of Tirek's intentions. He then returned to his homeland, while Tirek was sentenced to prison in Tartarus for his crimes.

Celestia and Luna deduce that Tirek must have escaped Tartarus when Cerberus last abandoned its gates; only now, they reason, has Tirek regained enough strength to use his dark powers. With the threat of Tirek's strength returning looming over their heads, Cadance elects Twilight to stop him. Before she can accept, however, Celestia woefully tells Twilight that she has chosen another in her stead: Discord.

Twilight relays Celestia's decision to her friends in Ponyville, and while most of them are skeptical of Discord's assistance, Fluttershy has the utmost faith in him. With nothing to do in the meantime, Twilight concedes to go to the Castle of the Royal Pony Sisters and "catch up on some reading", and her friends accompany her.

On their way to the castle, the ponies recall having to give up the Elements of Harmony to the Tree of Harmony. As they converse, Discord arrives, reading some of the Mane Six's entries in their friendship journal before heading off to track down Tirek. He also wonders why Twilight has yet to open the Tree of Harmony's chest, suggesting that whatever is inside could help Twilight prove her worth as a princess. Just before he leaves, he returns the friendship journal to Twilight and tells her that he bookmarked some of its more interesting passages. Twilight takes Discord's words to heart and begins searching the old castle library for a means of opening the chest.

Meanwhile, as Tirek continues absorbing unicorns' magic, Discord appears before him and binds him in chains. Tirek is disgusted to discover that Discord is acting on behalf of ponies, saying "friendship is but a new form of imprisonment". He proposes to Discord an alliance and offers to him something better than friendship: freedom. Discord looks behind him to a photo of himself and Fluttershy and ponders.

Twilight reads through the friendship journal, focusing on the sections Discord bookmarked, and discovers a pattern. She recalls when Applejack revealed the Flim Flam brothers' deception, Fluttershy showed the Breezies the ultimate kindness, Rarity endured Suri Polomare's schemes, Rainbow Dash chose to fly with Ponyville over the Wonderbolts, and Pinkie Pie overcame her own pride as a party planner. Each of them had to face a situation and make a choice relating to their Element of Harmony, and the ponies affected by their choice gave them a gift. Twilight believes their gifts are connected to the location of the chest's keys.

The ponies bring the objects—Coco Pommel's spool of rainbow thread, Spitfire's Wonderbolts pin, Seabreeze's flower, Silver Shill's gold bit, and Cheese Sandwich's rubber chicken Boneless—to the chest, but Twilight doesn't see anything special about them. When Pinkie Pie throws Boneless against the chest, a bright light turns him into a key, and he rests inside one of the chest's keyholes. Twilight's friends bring the rest of their gifts close to the chest, and each one becomes a key for one of its keyholes. However, there's still one key missing: Twilight's key.

Before the friends wonder where the final key could be, Spike belches out a letter for Twilight, telling her to go to Canterlot immediately.

Twilight flies to Canterlot and meets with Princess Celestia, Princess Luna, and Princess Cadance in the castle throne room. Celestia informs Twilight that Discord has betrayed them and joined forces with Tirek. She also says that Tirek has gained enough power that he can now steal the magic of Pegasi and Earth ponies as well as unicorns.

The princesses surmise that Tirek will go after Alicorn magic next, and once he has it, he will be unstoppable. However, Celestia has a solution: the princesses must rid themselves of their magic before Tirek has a chance to steal it.

Spike: Seems like only yesterday I was saving this place from being totally destroyed. Hey, you guys remember that?
Rainbow Dash: You only mentioned it about 15 times on the train here.
Rarity: [sarcastically, to Rainbow Dash] Yes, and we never hear a peep out of you about your exploits.
Rainbow Dash: Heh heh, point taken.

Lord Tirek: "Is he friend, or is he foe?" the pony wonders. I can assure you... I am no friend. I am Lord Tirek, and I will take what should have been mine long ago.

Applejack ...As in Discord Discord?
Twilight Sparkle: Yes!
Fluttershy: I don't think it's that big of a surprise. He can be very helpful.

Rainbow Dash: So, what are you supposed to do in the meantime?
Twilight Sparkle: [sighs] Nothing...unless, of course, one of you needs me to smile and wave.

Discord: You're right, Spike. It is a big deal. Seems I possess a magic that gives me quite an important role in Equestria. Maybe they should make me an Alicorn princess.
[cheering offscreen]
Discord: Mmwah! Mmwah!
Rainbow Dash: In your dreams!
[bonk!]
Discord: Oh, I never dream of such things. Ask Princess Luna.

Lord Tirek: Oh, I should've known you would want to have Equestria all to yourself.
Discord: Oh, I'm not doing this for me. I'm doing it for my friends. Just between the two of us, it's mostly for Fluttershy. [squee]

Rainbow Dash: Sure, but being loyal to my friends will always—
Pinkie Pie: Ooh! Ooh! My turn! My turn!

Pinkie Pie: Come on, Boneless! Give us that key! 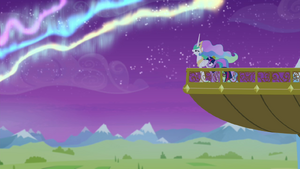