A large crystal spire - this could only mean one thing.

"Seems like only yesterday I was saving this place from being totally destroyed." (It was more than only yesterday. It was a whole week ago!)

"Hey, you guys remember that?"

Just because you have a crystal likeness of yourself doesn't mean you should be cocky about it.

"You only mentioned it about fifteen times on the train here."

"Yes, and we never hear a peep out of you about your exploits." (Ooooooh, buuuuurrn!)

These ponies were last seen sitting next to Prince Blueblood and Cherry Jubilee at the Equestria Games.

Hey, what was that for?

Real smooth, Spike...
Add a photo to this gallery

Doesn't the duchess look a lot like Queen Amidala?

Your highness. Thank you for understanding our desire to keep the number of those privy to these confidential discussions to a minimum.

I'm sorry, Twilight, but their visit is already over.

Strangely, Luna appears to be the only pony genuinely concerned about Twilight's feelings.

you protect the Crystal Empire,

Quiet please! Her Highness is about to serenade.

For all the journeys I have taken. All the lessons that I have learned

But I wonder where I'm going now. What my role is meant to be

I have my wings,

I wear this crown. I'm a princess, this is true.

But it's still unclear to me Just what I am meant to do .

I want to have a purpose

Want to do all that I can

I want to make a contribution.

I want to be a part of the plan.

Your destiny's uncertain and that's sometimes hard to take.

But it will become much clearer

With every new choice you make

I know how hard it is to wait.

To spread out your wings and soar!

But you stand here for a reason!

You're gifted and you are strong!

That crown is upon your head

Know that your time is coming soon

As the sun rises, so does the moon

As love finds a place in every heart

You are a princess, you'll play your part

All the known princesses in song together.

We understand you wanting more

A chance to shine,

a chance to soar!

Soon will come the day,

Know that your time is coming soon! As the sun rises, so does the moon! As love finds a place in every heart

You are a princess, you'll play your part!

You are a princess, you'll play your part!

"Your time will come."

Creepy night for carrying a bucket of oranges!

Suspicious noises should be suspicious.

I am no friend. I am Tirek.

And I will take what should have been mine long ago.

Wait... where have I seen those eyes before?

Tia, my sister. Art thou fair?

Lulu! How many times must I tell you? We are not in the Middle Ages any more!

My apologies. Old habits are difficult to break.

You nail the windows shut, I'll alert the guards!

Luna, I don't want to alarm you but there may be a boogeymare or Tirek has returned!

"Tirek and his brother Scorpan came here from a distant land, intent on stealing Equestrian magic."

"But Scorpan soon came to appreciate the ways of Equestria..."

"...even befriending a young unicorn wizard."

"Scorpan urged his brother to abandon their plans."

"Scorpan returned to his own land..."

"...and Tirek was sent to Tartarus for his crimes."

Uh, Celestia? Twlight has a question.

There's only one person who can stop him easily:...

Discord?!
Add a photo to this gallery

Discord's got a mission...

"As in Discord Discord?"

Huh... who would have thunk it? Not even Twilight Sparkle.

"He can be very helpful."

Yeah, not so much, Fluttershy.

What are you going to do in the meantime?

Unless of course, one of you needs me to smile and wave.

For a spoonful of chaos helps the friendship go down...in a most cha-o-tic waaaaaaay.

How'd you guess we were talking about you?

"My ears were burning."

a little glass of water!

Gather round children, it's story time

A Pint of Chaos, saves a Gallon of Magic

"Maybe they should make me an alicorn princess."

Naturally, only Fluttershy finds this rather funny.

Twilight made exactly the same face for the infamous Twilicane shot.

Oh, I never dream of such things...

Is this really a good idea?

Hmm... to figure out how to open this particular magic chest.

Wait! Were you eavesdropping on us again?

Am I not supposed to do that?

Um, Discord? Blythe Baxter called. She wants her scooter back.

I've bookmarked a few more interesting passages. You really should take a look!

We are still on for tea later, right Flutters?

I wouldn't miss it!

He's now entering "The Twilight Zone", Picture if you will-

"But he could be right, couldn't he?"

Yes! Yes he could!

Well, might as well take Discord's advice on this one.

Another one bites the dust!

So that's how Discord would look as a pony...!

Well, his horn is mismatched to his coat!

That is one strange bird.

Officer Discord is on the job!

He can arrest me any day!

"Just between the two of us, it's mostly for Fluttershy. "

Discord would make a lousy male dancer, if you get my drift.

Did somepony say: "Butter Up?"

If Brian Boitano met a villain who escaped confinement in Tartarus, what would he do?

Tirek V.S. Fluttershy! Who will win?

If it wasn't for the suspicious music and Tirek right over there, this would've been a cute picture.
Add a photo to this gallery

"And what about total exhaustion is a good sign?"

"Best party I've ever had!"

Cough out that key, Boneless!

The Key of Laughter.

The Key of Generosity.

The Key of Honesty.

The Key of Loyalty.

The Key of Kindness.

Twilight, you're key is still missing. The Key of Magic.

Spike is rather enjoying Rarity's hoof on his head.

I'm surprised nobody else has mentioned the fact that the pony on the left here looks like Digibrony...

Hey everypony, watch me pull a baddie out of my hat!

His cloak is there...

That was great, what does the avacodo think? Avacodo: It's the pits!

Oh, come on, Bulk Biceps! You couldn't fly like that at the Equestria Games, but now you can?!

"With Discord by his side, we will not be able to stop him from taking it."

"Once it is in his possession, his power will know no bounds, and all hope will be lost."

"But there is one solution."

"It is only by making this sacrifice that Equestria and the lands beyond it might be saved..."

"We must rid ourselves of our magic, before Tirek has the chance to steal it from us!"

To be continued...Immediately
Add a photo to this gallery

The Princesses have gathered.

If you thought Magical Mystery Cure will be the only time Princess Celestia ever sang, think again!

Everypony knows that something scary is coming...except for Pinkie. For her, it's just another day in Ponyville.

"Friend or foe? Read ancient Dream Valley mythology again. Gives my powers to that ape witch from The Big Brother Ponies, but still..."

"You wouldn't believe what I just found out from this book." 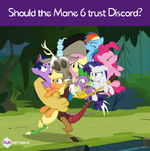 Awwww, group hug!
Add a photo to this gallery
Retrieved from "https://mlp.fandom.com/wiki/Twilight%27s_Kingdom_-_Part_1/Gallery?oldid=2192828"
Community content is available under CC-BY-SA unless otherwise noted.