Twilight's Kingdom - Part 2 is the twenty-sixth episode of the fourth season of My Little Pony Friendship is Magic and the ninety-first episode overall, being the last episode to take place before the film My Little Pony Equestria Girls: Rainbow Rocks. It is the second part of a two-part season finale. Along with Part 1 of the finale, these two are the final episodes to premiere on the Hub Network before its rebranding as Discovery Family Channel.

In this episode, the other princesses transfer all of their Alicorn magic to Twilight Sparkle in hopes of saving Equestria from the diabolical Lord Tirek.

In the episode's storyboards, Twilight escapes her library's destruction without Owlowiscious, who was added in the final cut; she also knees Tirek in the jaw and punches him in the face, which was changed to her teleporting above him and slamming him into the ground with a burst of magic energy.[2] Shortly after the episode finished premiering, Meghan McCarthy wrote on Twitter "My fave note on #MLPSeason4Finale ‘We cannot show Twilight punch Tirek in the face’"[sic].[3]

Princess Luna explains to Twilight Sparkle that they must give up their magic before Lord Tirek comes to steal it. Twilight is more than willing to sacrifice her magic as well, but Luna elaborates that their magic can't disappear into thin air; someone has to keep it safe, and Princess Celestia says that someone is Twilight because they believe Tirek doesn't know there's a fourth princess of Equestria.

Twilight is uncertain, as she is only just learning to control her own Alicorn magic, but Princess Cadance believes she can, as she represents the element of magic itself. Celestia adds that Twilight must keep the magic a secret from her friends or else put them at great risk. With these in mind, Twilight accepts this task, and the other princesses carry out a ritual that transfers all of their magic into Twilight. Elsewhere, Discord picks up on this magical imbalance but thinks nothing of it.

When the transfer is complete, Celestia, Luna, and Cadance are left severely weakened and exhausted, and their cutie marks have vanished.

Twilight returns to Golden Oak Library in the middle of the night, causing Spike to wake up. As a result of her absorbing the other princesses' magic, Twilight suffers from the occasional magical twitch, and she tries keeping it a secret from Spike. Spike, noting that the sun hasn't come up yet, goes back to sleep. Twilight realizes that the sun should indeed be up by now and uses her magic to (awkwardly) lower the moon and raise the sun.

Back in Canterlot, Discord and Tirek find Shining Armor, with Shining Armor labeling Discord a "traitor." Once Tirek absorbs his magic and that of the royal guards, Tirek tells Discord to "go and have a little fun" while he makes his way to the throne room. Inside, Tirek finds Celestia, Luna, and Cadance but is shocked and infuriated to discover they have no magic for him to absorb.

In Ponyville, Twilight struggles to get used to her new power while also keeping them hidden from her friends. After blowing the door off the library and zooming past Rainbow Dash, she tells her friends to keep all the ponies in Ponyville indoors and heads back toward the Castle of the Two Sisters.

With Celestia, Luna, and Cadance without their Alicorn magic for him to absorb, and in a cruel act of revenge against them, Tirek banishes the three princesses to Tartarus as he once was. As a sign of his gratitude and loyalty to Discord, Tirek gives him a medallion that was given to him by "someone very close." Tirek sees a stained glass window depicting Princess Twilight and realizes that there's a fourth princess living in Equestria. He asks Discord where she is and Discord points him in the direction of Ponyville.

After Twilight's friends secure the other ponies' safety, Discord appears before them and imprisons them in a cage. Realizing Discord's betrayal, Fluttershy is reduced to tears. With the ponies together in one place, Tirek absorbs their magic and grows even more powerful. Discord is thrilled by the prospect of ruling Equestria alongside Tirek, but Tirek says Discord is no longer of use to him and absorbs his magic as well.

A weakened Discord reminds Tirek of his medallion—his sign of his "gratitude and loyalty". Tirek says the medallion was given to him by his treacherous brother Scorpan and considers both him and the medallion worthless. As Tirek leaves to seek out Twilight, Discord is distraught over the same act of betrayal he brought upon Fluttershy and the others.

Near the ancient castle, Twilight continues practicing her new powers, with some difficulty. When Tirek appears and demands her magic, Twilight desperately avoids him. In the process, at least the aboveground portion of Golden Oak Library is completely destroyed. In rage, Twilight fires upon Tirek with a massive magic blast. Tirek realizes what the other princesses have done, and Twilight battles him in an explosive and destructive duel, able to combat him on equal footing.

Seeing the two of them are at a stalemate, Tirek offers with Twilight a trade: the release of her friends in exchange for the Alicorn magic. Despite her friends' protests, Twilight agrees to trade the magic for her friends, including Discord. Discord thanks Twilight and apologizes to Fluttershy, and Tirek promptly absorbs all of Twilight's magic, making him almost unstoppable.

Discord, repentant of his actions, gives the medallion given to him by Tirek to Twilight as a sign of true friendship. Believing this to be the final key needed to open the chest, Twilight and her friends race to the Tree of Harmony.

Twilight and her friends return to the chest, where Twilight's medallion turns into the last key. Before Tirek discovers and stops them, the six friends turn the keys at the same time, and the top of the chest opens, releasing a rainbow-colored blast of power that showers them in light. The ponies are transformed and given rainbow-marked coats, manes and tails. They confront Tirek, who is unable to overpower their magic.

A blast of light strips Tirek of his power, and he is banished to Tartarus once more. Twilight and her friends fly over all of Equestria and return all of the ponies' stolen magic, and the other princesses are freed from their own imprisonment. Finally, the Tree of Harmony launches the chest and its keys toward Ponyville, where it sinks into the ground. Mere seconds later, a great crystal castle rises out of the ground from where the chest landed.

Twilight and her friends behold the castle's majesty as their rainbow powers wear off, with Twilight wondering who the castle belongs to. Princess Celestia then appears, along with Princess Luna, Princess Cadance, Spike and Discord, telling Twilight that the castle is hers. As they walk through the castle corridors, Twilight finally understands her role as a princess: to spread the magic of friendship across Equestria. In recognition of her role, Princess Celestia designates her the "princess of friendship".

"But what is the princess of friendship without her friends?"
— Princess Celestia

In the castle throne room sit seven thrones, one for Twilight and each of her friends (except for Discord, who Fluttershy tells has yet to deserve one).

As the ponies of Ponyville gather outside the new castle, Twilight steps out and invites them inside as she and her friends sing an upbeat song. Through the magic of their friendship, a rainbow shoots up from the throne room floor and travels across Equestria, where it is witnessed by Coco Pommel, the Wonderbolts, Cheese Sandwich, the Breezies, Silver Shill, and Discord. In the throne room, Discord is finally accepted by the ponies, and he gives Princess Celestia a bouquet of flowers as a sign of apology, much to her own surprise.

The final shot of the finale sees Twilight taking a photo with her friends.

Spike: You weren't gone very long. Does that mean everything's okay?
Twilight Sparkle: [trying not to sound suspicious] Yep! Everything's fine!
Spike: In that case, I'm going back to bed. The sun's not up...and neither am I.

Applejack: Jumpin' junebugs, Twilight! When did you learn to fly that fast?
[electricity crackles]
Twilight Sparkle: I must have caught a particularly strong breeze...or something.
Rainbow Dash: Must have been "or somethin'" because there wasn't any breeze up there.

Discord: Oh, my, I do love a good accessory. I suppose that's Rarity's influence.

Fluttershy: Why are you doing this? I thought we were friends.
Discord: Oh, we were. But Tirek offered me so much more than just tea parties. Surely, you saw this coming.
Fluttershy: [crying] I didn't. I really didn't.

Applejack: Surely, you saw this coming.
Discord: I didn't. I truly didn't.

Rainbow Dash: Don't do it, Twilight!
Fluttershy: We aren't worth it.
Discord: Oh, but you are, Fluttershy. You are the pony who taught me that friendship is magic. I had magic and friendship. And now, I don't have either.

Discord: Tirek tricked me into believing he could offer me something more valuable than friendship. But there is nothing worth more. I see that now. He lied when he said that this medallion was given as a sign of gratitude and loyalty. But when I say that it is a sign of our true friendship, I'm telling the truth.

Rarity: Sweet Celestia! Are you all seeing what I'm seeing?
Twilight Sparkle: But... whose is it?
Princess Celestia: I believe it is yours, Princess Twilight.

Princess Celestia: You've been wondering what you are meant to do as a princess. Do you know now?
Twilight Sparkle: As princess, I believe I have the power to spread the magic of friendship across Equestria! That is the role I am meant to have in our world! The role I choose to have! But I didn't defeat Tirek on my own, it took all of us to unlock the chest!
Princess Celestia: Then it is unlikely you are meant to take on this task alone. You are now Twilight Sparkle, the Princess of Friendship! But what is the Princess of Friendship without her friends?

Discord: Wait a minute, where's my throne?!
Fluttershy: I don't think you're quite there yet.
Discord: Oh, I suppose not. 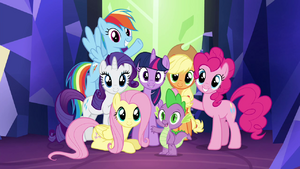