...The four princesses still conversing with one another.

Ever ready, ever willing!

But there were other plans in mind.

"That somepony is you, Twilight."

"We do not believe that Tirek is aware that a fourth Alicorn princess exists in Equestria. If we transfer our magic to you, Tirek will not know where it has gone."

"Do you understand what we're asking of you?"

"I'm only now learning how to control my own alicorn magic."

"Taking on this task will be one of the most difficult things I'll ever do."

"But with the help of my friends–"

"But you must keep your new abilities a secret. I fear that your friends being aware of your new power could put them at great risk."

"Do you still think you can take on this responsibility?"

"This is the role I am meant to play as a princess of Equestria."

"Then we must begin at once."

I feel a disturbance in the—oh, never mind.

Hey look, Celestia and Luna's hair isn't moving anymore. Oh wait, this is a picture, you can't see that.

I`ve got the power!

So what happens now?

Celestia, in a weakened state without her powers.

This is just too precious.

And, so it has been done.
Add a photo to this gallery

Back at the library

This is the last time we'll see this place again.

Little Spike being his usual sleepy self.

"Does that mean everything's okay?"

"Yep! Everything's fine," she said as if she didn't have extra magic inside her.

The sun's not up... so I'm not up (Guess Spike doesn't want to build a snowpony.)

The sun should be up by now...

The sun should be up by now!!!

Does Celestia levitate when she raises the sun?

No, the other left!

Wonder if Celestia and Luna are now regretting their decision.

Shining Armor and the princesses

Hmm, that's weird. The sun is late and rising too fast.

Shining Armor should take better care his men don't float away on him.

Hey what happened to my helmet!

That's some odd questioning right there.

It's your magic I'm hungry for!

Get some, you beast!

Just a light snack for me.

Ya know maybe Ill do this myself...

Is he feeling bad for Shining Armor?

I'm still hungry. Why don't you go and have a little fun, while I have a meal at the castle.

Waiting for the inevitable.

And here he comes.

Uh, how much did it cost to make those doors?

Celestia's magic is first on the menu!

Nothing to absorb. Get TicTacs or something because your breath STINKS!

Also nothing to absorb. Get Excel because your breath again STINKS!

Again, nothing to absorb. Get Mentos because your breath definitely STINKS!

The trouble with magic

A frightful glow coming from the library's portal!

There goes the door!

Apparently too much power for one pony to contain.

Rollin' around at the speed of sparkle.

I wonder if Twilight was faster than Rainbow Dash at this point.....

Anypony notice that Rarity's smile is completely different from the others?

This is certainly a "majestic" sight to see.

"...knowing that soon every Pegasus, unicorn, and Earth pony will bow to my will..."

"Give my regards to Cerberus."

Luna gets sent in WAAYYY ahead of the other two.

Celestia, majestic even in defeat.

A flower of fire.

Well, that was easy.

Hey, Discord, can you get me a sandwich?

And, as payment for that service, I shall give you...

"I do love a good accessory."

Well, now that I rule Equestria, let's make some SANDWICHES!!!

Discord, I find your sense of humor...disturbing.

I am most EMPHATICALLY not amused.

No, that's not my sense of humor, Tirek.

Then whose sense of humor is this!!??

Or is there ANOTHER princess out there?

Well...yes there is a fourth princess...

...but I'm currently wondering...do you have any more of these things?

Don't play games with me, Discord...

Where is her castle?

"Princess Twilight lives above a library in Ponyville!"

"Not for much longer."

Somepony has to call the local asylum when the glassmaker hears about this.
Add a photo to this gallery

Just a gathering of five familiar ponies... and a baby dragon.

Oh, this makes his next move much more horrible!

Did you bring the cucumber sandwiches?

Oh I didn't need to bring them Fluttershy since I can just make them pop out of thin air!

Discord: So, they're worthless. And so are you! Mane five: Hey! What are you doing?!

"And her little dragon too."

I suppose being a dog did in fact teach Spike a thing or two.

Feeling betrayed in the worst way.

"Surely, you saw this coming."

Discord feeling ashamed of his betrayal

But Tirek sure feels good.

Oh! He finally broke his shackles off! And his beard grew too!

"Us?" Who said anything about me sharing the power with you, moron?

Fool, you think I'd actually trust you? Worse, you actually thought I'd share my power with you?

You're an idiot to trust me.

How does it feel having betrayed your friends for nothing?

But now, I no longer have any use for you.

Your magic, I will take, though.

Discord is so strong, and yet Tirek didn't get bigger.

That medallion was given to me by my traitorous brother.

It's as worthless as he is. Just like you.

"Surely you saw this comin'."

"I truly didn't."
Add a photo to this gallery

Oh, give me a home / Where the Alicorns roam...

Looks like Twilight is stuck between a rock and a hard place.

You Have Something That Belongs To Me!!!

Um, weren't you supposed to be getting AWAY from him??

Large and in charge.

Take a good look. This is the final time you get to see this place in one piece. :,(

Yeah, I doubt even the Apple family can fix that place. Maybe, I should've traded those books.

I'll see you next season.

That's the last straw! Nopony takes my home away from me!! Especially when my home is A LIBRARY!

Iresistable force vs. the immovable object

Still think this is a show for little girls, eh?

"Now I understand what your fellow princesses have done!"

There's no way that can be right!

How to tell when your enemy is super angry with you: *

This is for the library and Ponyville, you power-hungry GOAT!!!

Since the fight began *; she doesn't even mince words with you!

Now why is this familiar?

BOOM!!!
Add a photo to this gallery

Giving up the magic

Don't think this rubble is stopping this guy.

Tirek is one tough son of a gun!

I doubt Tirek will be intimidated by that look, Twilight Sparkle.

As always, Twi has to make a decision between her friends and something else.

And she always chooses her friends.

Your magic for your friends' lives!

So what's it going to be?

Why do I always have to make the hardest decisions?

"You're the pony who taught me that friendship is magic."

"I had magic and friendship, and now, I don't have either."

Well, we all knew it would happen, and, it did!

What will your decision be, Twilight?

"ALL of my friends."

"After the way he has betrayed you..."

"I know." (You really disappointed her Discord. You knew better!)

Fall of the last pony...

Does he have bad breath of magic?

He could be the new boyfriend of Sunset Shimmer in creature form, which also has a bad case of steroids.
Add a photo to this gallery

"Twilight, what were you thinking?" (She had no choice, Spike. It's either her magic or your lives.)

"Tirek tricked me into believing..."

"...that he could offer me something more valuable than friendship. But there is nothing worth more. I see that now."

"He lied when he said that this medallion was given as a sign of gratitude and loyalty."

Full of regret and remorse.

"But when I say that it is a sign of our true friendship..."

Wow! Who knew Discord would be the one to give Twilight her key?

Twilight, this must be your key of Magic

The Key of Magic.

All the keys are in place!

We have to do this together!

Six keys, six ponies, one hope for all.

It's the Rainbow of Light!

Laughter is so bright... so intense!!!

Not this time, jerk! REJECTED!

I will get all of you!

Tirek is getting smaller from his steroids disease...

And THIS time, he's never getting out EVER.

The Crystal Empire is missing from the map.

Returning what was once stolen.

Derpy is 'squee'ing while flying with R.D. and Fluttershy. Yay.

They have done it...

Where is the chest going?

Is the box a seed?

It's no Golden Oak Library, but it's the next best thing.
Add a photo to this gallery

Twilight Sparkle: The Princess of Friendship

Welcome to your new home, girls!

So, Rainbow Powers is a temporary thing after all.

"Are you all seeing what I'm seeing?!"

"Princess Twilight." Oh, look, all of the much loved, super important side characters in one place.

Sorry, but that so-called castle is too crammed in!

"As princess, I believe I have the power to spread the magic of friendship across Equestria."

"That is the role I am meant to have in our world!"

"The role I choose to have!"

"It took all of us to unlock the chest."

As is Rarity, naturally.

But what is a Princess of Friendship without her friends by her side?

I don't deserve to be here.

It's alright, Discord. We forgive you.

You're not quite there yet.

Yes, well, I suppose not.
Add a photo to this gallery

Let the Rainbow Remind You

That looks absolutely nothing like a castle. But it does look like Twilight's library only It's made more fancier.

Whatsamatta, Derpy? Ain't you never seen a castle before?

Welcome to my castle, everypony!

The rulers of Ponyville.

By the power of the Two Sisters!

By our powers combined!

I guess there really is a reading rainbow after all.

Seabreeze and the Breezies... (Kindness)

Who gave Celestia those flowers?

Well, well, well...seems that Celestia does have a thing for bad boys.

Ready for your picture?

See you next season, everypony!
Add a photo to this gallery

The Alicorn: The Desolation of Tirek

Twilight's castle in the background. 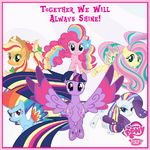 Together we will always shine Promotional Picture. 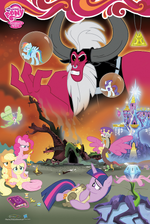 Add a photo to this gallery
Retrieved from "https://mlp.fandom.com/wiki/Twilight%27s_Kingdom_-_Part_2/Gallery?oldid=2192830"
Community content is available under CC-BY-SA unless otherwise noted.