Twilight Time is the fifteenth episode of the fourth season of My Little Pony Friendship is Magic and the eightieth episode overall. In this episode, the Cutie Mark Crusaders begin taking advantage of Twilight Sparkle's fame as a Princess to become popular at school.

Time with the princess

In the Golden Oak Library, the Cutie Mark Crusaders are learning new skills with Twilight Sparkle's help. Sweetie Belle tries using her magic on a broom but struggles with basic levitation. Scootaloo tries to assemble a unicycle but is less than thrilled at the thought of doing research. Apple Bloom tries her hoof at making potions, but her efforts only result in giving a flower a nasty cough.

At school, the Crusaders and Pipsqueak are playing a game of four square when Diamond Tiara calls them and the other foals on the playground to gather around her. She entices the colts and fillies with an acrobatic display she had promised to put on, but she has her butler Randolph perform it for her. The foals eat it up and shower Diamond Tiara with praise, and the Crusaders are frustrated by the attention she receives for not doing anything.

Apple Bloom is unsure of the idea, but Sweetie Belle and Scootaloo see this as an opportunity to have Diamond Tiara and Silver Spoon learn to do something on their own.

By the next day, Diamond Tiara and Silver Spoon have told every foal in the class about the Crusaders' "Twilight Time", and they all want in as well.

"Thanks to me, you three are now the hottest thing around. You're welcome."
— Diamond Tiara

Sweetie Belle is excited over her and her friends' newfound popularity among their classmates. Apple Bloom is still uncertain, but Sweetie Belle assures her that she has the situation under control. She arranges for Twilight to meet them for lunch at a fast food restaurant in Ponyville called the Hay Burger. Despite her friends' misgivings, she also allows for a few of her classmates to watch the princess from a distance—not realizing that the entire class has tagged along.

As Twilight and the Crusaders enjoy a meal together, with Twilight happily munching her food manner-free, the other foals watch from outside the window and take pictures. Twilight finally catches on when she hears the clicking of their cameras. She steps outside the restaurant, and the foals swarm her for photos and autographs. Pipsqueak marvels that his favorite restaurant is a regular hangout for a princess, but Twilight says she's only there because of the Crusaders.

"You mean, Princess Twilight decides where it's cool to go based on where they go?"
— Pipsqueak

Twilight thanks the Crusaders for the lunch invite and flies off, prompting the foals to swarm and fawn over the three fillies.

The Crusaders take advantage of their new popularity to receive gifts and favors from their classmates, including free lemonade from Pipsqueak, a hoof-shining for Scootaloo, and a bejeweled bow for Apple Bloom.

They race toward the library to explain the situation to Twilight, but the other foals cut them off at the door. While Twilight is surprised by the number of foals at first, she understands the Crusaders' desire to share "Twilight Time" with others and invites them all in. Twilight is pleased that so many foals in Ponyville are eager to learn from her, until Pipsqueak reveals that he wants to learn to get popular through knowing a princess like the Cutie Mark Crusaders have.

A disappointed Twilight confronts the Crusaders about this, and they tell her that they did indeed want to learn new things. But when Twilight tells them to prove it, they fail to perform due to shirking their practice. Twilight excuses all the foals from the library once she realizes none of them are interested in learning anything. The Crusaders apologize to Twilight for their mistake and leave, but not before demonstrating the skills they learned from her. Twilight stops them before they leave and decides to "give [them] a chance."

With Twilight's permission, Sweetie Belle writes the lesson she and her friends learned in the friendship journal.

Apple Bloom succeeds in making a flower grow with her potions, Scootaloo successfully assembles a unicycle, and Sweetie Belle becomes better with her magic. Twilight commends the three on their progress, and they take their leave, relieved that "Twilight Time" is back to normal. Just before stepping out, they disguise themselves so as not to be recognized by their classmates.

Twilight Sparkle: [eats noisily] [mouthful] I didn't realize how hungry I was. I'm so glad you asked me to join you here to today. [swallows food]

Apple Bloom: What was all this? And this?
Scootaloo: I couldn't help it! When I don't smile in a picture, I look sad.
Sweetie Belle: Oooh! We're gonna look sad alright!

Apple Bloom: I told ya this was a terrible idea.

Apple Bloom: I believe we have arrived, Cutie Mark Crusaders.

Sweetie Belle: Okay, I know exactly how to handle this. Run!

Sweetie Belle: I just hope no one sees us!
Apple Bloom: 'Cause we're tryin' to keep Twilight Time a secret now?
Scootaloo: Or because we look ridiculous?
Sweetie Belle: A little of both actually. 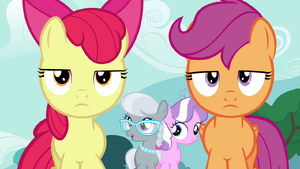