Looks like Sweetie Belle's finally about to do magic.

"I think I threw my neck out."

"Liftin' brooms'll be a cinch!"

"I doubt it. That thing weighs a ton."

Spike at the door.

The following gag was ruined by the Hub bug. Good thing it's not in this picture.

"I'll never get my cutie mark." (What, so you want Twilight's cutie mark or something?)

...but I'm happy to keep helping you learn!

Twilight's gonna show me how to build a bike!

"I already told you I won't show you how, but I'll help you find the instructions so you can figure it out yourself."

Okay then. Let's try it out on this apple seedling.

"I hope this works."

Every moment I live is agony!

Pinkie approves of this smile.

"Laying on a little thick there, aren't we pal?"
Add a photo to this gallery

Foursquare! (And we're not talking about the social network.)

"As you all know, I had promised to put on an amazing, first-time-ever acrobatic display for you all today!"

"I did not wish to disappoint you all..."

"...so I brought my butler Randolph to do them for me."

Whoa! Pretty good for a butler!

"I can't believe that she gets so much attention without really doing anything!"

"She's using somepony else to build herself up, and without even putting effort to learn her own skills like we do!"

"We could be the big shots around here."

I built a Unicycle!

Wow! I guess that's why they call her Apple Bloom.

Officially, there is a braided pony whose hair is purple.

Diamond Tiara is not the least bit impressed.

What? (sigh) Here we go again with that "Bump Bump Sugar-Lump Rump" chant.

So much for nice.

"She helps us learn cool new stuff to do!"

"That we actually do ourselves!"

And he had shakey legs earlier?

This Bluejay. Remember, with the rhythm just a teeny-tiny bit off?

Wherever Diamond Tiara goes I go, that's why we're besties.

"We should totally say yes!"

Silver Spoon looks so cute in this shot!

And the bullies spaz out!

Unaware of the two "guests" watching with evil expressions.

The other ponies want in

This could be bad!

Going to The Hay Burger

The only fast food restaurant in Equestria

"So what's the problem?"

So much for stealth.

Wait! Where are their cutie marks? ...And Silver Spoon's necklace?

The CMC looking amazed as Twilight eats with her entire face.

Golly Twilight's a pig, not to mention Pumbaa!

For a pony with OCD, she sure is a messy eater.

I guess Hay Burger's motto is "Why use napkins when you can use one of our burgers to wipe your face instead?"

You want some horseshoe fries with that, Twilight?

"I know. I've been so busy I forgot how delicious everything is here!"

Whoa, those foals are quick.

How can Twilight eat all those burgers but not gain any weight? Remember the last time she ate too much food?

First Pinkie. Then Applejack. And now, Scootaloo?! This ducky-lip craze must be in style now.

This scene is another hint that Scootaloo's lifestyle is strongly influenced by Rainbow Dash.

Haven't seen this Twilight's expression before?

"What was all this?"

Where's Fluttershy when you need her?

This is probably what it's like to be at BronyCon.

Favors for the Crusaders

What is thy bidding, my master?

"Razzle Dazzle" needs no payment from the friend of Princess Twilight.

How do Diamond Tiara's parents not hear them chanting?

"RUUUUUUUNNNNN!!!"
Add a photo to this gallery

Twilight to the rescue

Looks like the angry zombie foals have immideately given chase.

Looks as if they've just won the race!

"Come on in, everypony! Spike made nachos!" 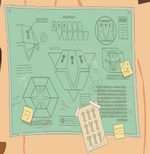 Blueprints of the Tree of Harmony's mystery chest? Most likely.

"We just felt it was the right thing to do."

Pipsqueak! It's been a while!

"I'd like to learn how to become a Cutie Mark Crusader."

"Welcome to your first flying lesson. Stick your right hand over the broom, and say, 'Up!'."

Stand back, it's gonna blow!

"They didn't come here to learn after all".

The other foals contemplate their hypocrisy. Wait, wasn't Twist supposed to be Apple Bloom's friend?

Sweetie Belle stealing one of Gob Bluth's catchphrases. "We've made a huge mistake."

That is a whooooolllle lotta nachos.

Here we get the first journal entry not written by any of the mane six.

Did Spike really have to throw all those nachos out? I'm sure Twilight would have eaten all of them! (Then again, maybe not...)

She's so cute when she laughs.
Add a photo to this gallery 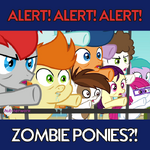 Ponies vs. Zombie Ponies? (Pipsqueak's back)

Those are some weird glasses. 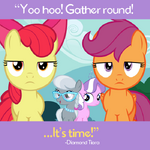 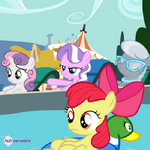 Add a photo to this gallery
Retrieved from "https://mlp.fandom.com/wiki/Twilight_Time/Gallery?oldid=2187011"
Community content is available under CC-BY-SA unless otherwise noted.