Twilight Velvet and Night Light, also called Mrs. Sparkle and Mr. Sparkle respectively, are the married unicorn parents of Twilight Sparkle and Shining Armor and paternal grandparents of Flurry Heart who live in Canterlot. They first appear in The Cutie Mark Chronicles, and have made very few appearances in the show since. They are named varyingly in credits, merchandise, and other depictions.

Both ponies feature unique mane designs. Twilight Velvet's mane and tail bear a slight resemblance to those of her daughter Twilight Sparkle, and she also resembles the G1 unicorn mare Twilight. Night Light bears a resemblance to the G1 Earth pony mare Nachtlicht (German for "nightlight").

Twilight Velvet and Night Light appear together in all of their series appearances.

Their first appearance is in Twilight Sparkle's flashback in The Cutie Mark Chronicles. They show a filly Twilight her enrollment letter into Princess Celestia's School for Gifted Unicorns, and they are also present at her entrance exam into the school. When Twilight loses control of her magic as a result of the sonic rainboom, they are briefly transformed into an agave and a cactus respectively. When Princess Celestia calms Twilight down, they return to normal. They are then seen urging their daughter to accept Celestia's offer to be her personal student.

Twilight Velvet and Night Light appear again in A Canterlot Wedding - Part 2, attending the wedding between their son Shining Armor and Princess Cadance. Velvet is seen crying tears of pride over her son getting wed.

The two make another appearance in Magical Mystery Cure at Twilight's princess coronation.

They both appear in the crowd in the stadium in Equestria Games.

They next appear in The Crystalling - Part 2 visiting Flurry Heart. In this appearance, the two have spoken dialogue, and Velvet's aura color is different.

Twilight Velvet and Night Light appear in Once Upon a Zeppelin, where they win a free zeppelin cruise with their family from a contest they didn't enter. The family soon discover that the cruise is actually a themed experience hosted by Iron Will where ponies pay to spend time with Twilight and Cadance. It is shown that Night Light has a passion for bingo, while Velvet enjoys more thrilling activities such as bungee jumping and barrel riding.

In Marks for Effort, when Twilight Sparkle gives School of Friendship students a friendship test, Cozy Glow intentionally-incorrectly answers the test question "Who is the Princess of Friendship?" with "Your mom", referring to Twilight Velvet.

In Sparkle's Seven, Twilight Velvet and Night Light appear in flashback, tallying the scores for Twilight and Shining Armor's competitions. In The Point of No Return, they both appear in Twilight's macaroni art family portrait. In Common Ground, Night Light briefly appears exploring the Buckball Hall of Fame in Appleloosa.

In The Ending of the End - Part 1, Night Light briefly appears in the Canterlot Castle courtyard during the preparations for Twilight's ruler coronation. In Part 2, both Twilight Velvet and Night Light take shelter with other unicorns inside the School for Gifted Unicorns as Canterlot closes itself off from the other pony races. Later, they take part in the final battle against Queen Chrysalis, Lord Tirek, and Cozy Glow.

A promotional image posted by the official European Spanish My Little Pony Facebook page on May 3, 2015 uses fanart of Twilight Velvet.[1][2]

Twilight Velvet and Night Light appear in the fourth story arc of the IDW comics' My Little Pony: Friendship is Magic comic series, with spoken lines. They leave a filly Twilight in the care of her foal-sitter Cadance while they attend Shining Armor's flugelhorn recital. Twilight Velvet is shown to have a tendency of smothering her son with affection, calling him "Shiny". Shining Armor's flashback in Issue #11 implies Twilight Velvet to have what could be "a Daring Do Award for Authors... or an award for a book about the character rather than the DD series..."[3][4]

On My Little Pony: Friends Forever Issue #26 page 1, Night Light is mentioned when Twilight suggests using his name as Shining Armor's "tribe" during his diplomatic visit to Yakyakistan. On My Little Pony: Deviations page 1, they are turned into plants during Twilight's school entrance exam similarly to in The Cutie Mark Chronicles but retaining their manes and faces.

Twilight Velvet and Night Light also appear on page 24 of the My Little Pony Holiday Special 2017 comic. In My Little Pony: Ponyville Mysteries Issue #2, they appear on the Canterlot bowling team on page 13.

Twilight Sparkle and Shining Armor's dad has a crescent moon for a cutie mark. He is married to Twilight Velvet.

Card #66 C of the Enterplay collectible card game's expansion set Canterlot Nights gives Twilight Velvet the description "Her son was Captain of the Guard in Canterlot, and is now Prince of the Crystal Empire. Her daughter was personal protégé of Princess Celestia, and is now a princess in her own right. Twilight Velvet deserves to be proud!" Card #51 C of the game's expansion set The Crystal Games names Night Light and lists the quote "I helped Twilight study for her entrance exam into Celestia's School for Gifted Unicorns. I love her to bits, but I hope I never, EVER, see another flash card as long as I live."

Night Light: You would not believe the crazy weather that delayed our train. Came out of nowhere.
Twilight Velvet: But it was all worth it to see this peaceful little angel! Awww, so sweet! Come to your grandmare!
— The Crystalling - Part 2

"Cadance, darling, aren't we gonna name the poor little dear, or are we gonna spend our entire visit just calling her 'the baby'?"
— Twilight Velvet, The Crystalling - Part 2

"When somepony offers you a free vacation, you just sign the paperwork and don't ask questions!"
— Twilight Velvet, Once Upon a Zeppelin

"Oh, I just love how the numbers and letters are organized in their little boxes. It's so satisfying."
— Night Light, Once Upon a Zeppelin

Twilight Velvet: I'm so glad you brought me Cadance's flyer, honey! She was free tonight to foal-sit so we can all go to your flugelhorn recital!
— Friendship is Magic Issue #11

Twilight Velvet: Now we'll be a little late. Shiny will want to go out for ice cream after the recital or he'll get all cranky-wanky!
Twilight Sparkle: Very "cranky-wanky".
Princess Cadance: *giggle*
— Friendship is Magic Issue #11 and Issue #12

Twilight Velvet: Oooohhhh! My Shiny winey is so handsome-wandsome!
Night Light: It's too bad your date couldn't come here for photos!
Shining Armor: Yep. Too bad.
— Friendship is Magic Issue #12

Twilight Velvet: Oh, I'm so excited to meet all your teachers, Twylie!
Twilight Sparkle: Ha ha... Yes! My teachers...
Night Light: And the princess, too! I can't wait to talk to her!
— Friendship is Magic Issue #40

Twilight Velvet: So! Twilight! Why don't you tell us about your classes? Your letters home have been a little... short.
Twilight Sparkle: Um... ...They're ...good.
Night Light: ...Can you be more specific?
— Friendship is Magic Issue #40

"I helped Twilight study for her entrance exam into Celestia's School for Gifted Unicorns. I love her to bits, but I hope I never, EVER, see another flash card as long as I live."
— Enterplay collectible card game The Crystal Games expansion set card #51 C of Night Light 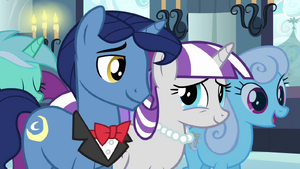