Twinkleshine is a female unicorn pony with an ivory coat, curly pink mane and tail, electric blue eyes, and a cutie mark of three sparkly blue stars. She shares her design with Lemon Hearts, and shares her tail style with Daisy and Golden Harvest. She has speaking roles in Friendship is Magic, part 1, A Canterlot Wedding - Part 1, A Canterlot Wedding - Part 2, Amending Fences, and the IDW comics' story The Fall of Sunset Shimmer. Her design resembles that of G1 Moondancer, whose G4 counterpart Moon Dancer she mentions in her first speaking role.

Twinkleshine appears next to "Piña Colada" in both versions of the My Little Pony theme song. In the first version, they appear on the left side of the scene with Twinkleshine to the left. In the second version, they are on the train platform with Twinkleshine on the right. They are also briefly next to each other at town hall in Friendship is Magic, part 1 and at the bowling alley in The Cutie Pox.

Twinkleshine appears in over half of the season one episodes as a background pony. Her first appearance is in Friendship is Magic, part 1, where she, Lemon Hearts, and Minuette meet Twilight Sparkle in Canterlot while carrying presents on their backs. She invites Twilight to Moon Dancer's get-together, but Twilight declines on the grounds that she has "a lot of studying to catch up on." Twinkleshine expresses her exasperation behind Twilight's back and chides her for showing more interest in books than friends. She next appears in the surprise party that Pinkie Pie throws for Twilight.

In The Ticket Master, Twinkleshine is one of the ponies crowding around Twilight in front of the library, and again in the alley that Twilight teleports out of. A handful of frames show her starting to run after Twilight, but she is not part of the throng of background ponies in the chase scene that follows. During her two-second participation in the race, her mane style changes to one resembling that of Cherry Berry and Berryshine.

Despite Rainbow Dash stating in Sonic Rainboom that only Pegasus ponies can walk on clouds, Twinkleshine stands on a cloud in both Fluttershy's and Rainbow's flashbacks in The Cutie Mark Chronicles. When this scene is reused in The Cutie Re-Mark - Part 1, Twinkleshine and other wingless ponies are redesigned as Pegasi.

Twinkleshine appears dressed up in Sweet and Elite. In A Canterlot Wedding - Part 1 and A Canterlot Wedding - Part 2, she is one of Queen Chrysalis's original trio of bridesmaids, along with Minuette and Lyra Heartstrings. Contrary to the fake Princess Cadance's disapproval of her tailored wedding dress and train, Twinkleshine says, "I think they're lovely." During This Day Aria, Twinkleshine appears as one of twelve horn-blowing unicorns at the wedding. Later, when the real Princess Cadance and Twilight Sparkle escape the crystal caves, the three brainwashed bridesmaids try to block their way, but the Princess distracts them with her flower bouquet.

Twinkleshine appears in Bloom & Gloom, Tanks for the Memories, Make New Friends but Keep Discord, Slice of Life, and Princess Spike. In Amending Fences, Twinkleshine is referred to by name for the first time in the series and reconnects with old friends Twilight Sparkle and Moon Dancer. In Do Princesses Dream of Magic Sheep?, she appears in Ponyville's shared dream. In Canterlot Boutique, she appears during Rules of Rarity and at Canterlot Carousel's going-out-of-business sale. In Rarity Investigates!, she watches the Wonderbolts' performance alongside Dark Moon. In Scare Master, she and Amethyst Star laugh together during Nightmare Night.

In Forgotten Friendship, Twinkleshine briefly appears browsing a shelf in the Canterlot library.

In Spring Breakdown, she briefly appears walking through Ponyville while Sunset Shimmer, Sci-Twi and human Rainbow Dash head to the Castle of Friendship.

Twinkleshine first appears in My Little Pony The Movie on a bridge with Minuette and Moon Dancer during We Got This Together, and later flees when the Storm Creatures invade Canterlot.

In Triple Pony Dare Ya, Twinkleshine appears with Lemon Hearts waiting in line for Granny Smith's Hearth's Warming fruitcake at the Ponyvile marketplace.

In Rarity and the Curious Case of Charity, Twinkleshine appears in chapters 11-12.

Twinkleshine is one of the available playable characters in Gameloft's mobile game. She was added to the Android version of version of the game on March 28, 2013. The game is the first time that she is simultaneously referred to by name and depicted with the same design and color scheme as in the show.[5]

Twinkleshine appears as a filly in episode 1, "Types of Magic".

A unicorn pony named Twinkleshine was released as both a mystery pack figurine and a Playful Ponies toy in 2010. The toys share the character's cutie mark and eye color, and the mystery pack toy—using Twilight Sparkle's mold—shares the mane color except for the darker streak. The Playful Ponies toy, however, features rosy red hair and is based on Rarity's model. Both toys' coat colors are pink in contrast to the character's off-white coat, but Twinkleshine's identity is confirmed by Gameloft's mobile game, Enterplay's collectible card game, and Amending Fences. According to the back of the European mystery pack collector card, Twinkleshine "loves playing games." The front of the card depicts Twinkleshine standing in Canterlot.[6] According to the European Playful Ponies package, Twinkleshine "loves the movies". The U.S. Playful Ponies package has a longer description and reads, "TWINKLESHINE dreams about being a famous movie star. Drama. Comedy. Action. She loves it all!"[7] She shares her movie interest(s) with Juniper Montage. A second mini-figure toy and collector card pair of Twinkle Shine[sic] is included in the nineteenth wave of mystery packs.

Enterplay collectible card game card α #134 U, Critter Cuisine, attributes to Amethyst Star and Twinkleshine the respective quotes "But ferrets are carnivorous!" and "Shhh, maybe they don't know that yet!" In the game's set Rock N Rave, Twinkleshine is named on her card #3 F, which gives her the description "Nopony at Celestia's School for Gifted Unicorns took better notes than Twilight Sparkle, but Twinkleshine was no slouch!" In the game's expansion set Absolute Discord, Twinkleshine is named on her card #51 C, which gives her the description "Studying with Twilight Sparkle before her big move to Ponyville helped Twinkleshine look at magic in all new ways!"

"There you are, Twilight. Moon Dancer is having a little get-together at the west castle courtyard. You wanna come?"
— Friendship is Magic, part 1

"Does that pony do anything except study? I think she's more interested in books than friends."
— Friendship is Magic, part 1

"You're not going anywhere."
— In unison with Lyra Heartstrings and Minuette, A Canterlot Wedding - Part 2

"I want it!"
— In unison with Lyra Heartstrings and Minuette, A Canterlot Wedding - Part 2

"We saw you at the coronation. That was some shindig!"
— Amending Fences

"Of course. We wouldn't miss one of our best friends' parties."
— Amending Fences

"Such attention to detail!"
— Rarity and the Curious Case of Charity

"Rarity, you're a hoot!"
— Rarity and the Curious Case of Charity

"Oops. Honestly, I had no idea that spell would summon a balor!"
— Enterplay collectible card game High Magic card #80 U of Twinkleshine

"No, wait, come back! You have something on your face!"
— Enterplay collectible card game Marks in Time card #39 U of Twinkleshine 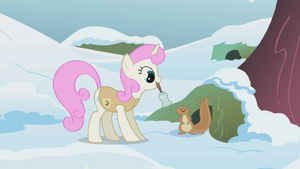 Retrieved from "https://mlp.fandom.com/wiki/Twinkleshine?oldid=2159061"
Community content is available under CC-BY-SA unless otherwise noted.