Start a Wiki
The Twinkling Balloon, or the Twinkle Twinkle Air Balloon, is a purple hot air balloon featured in the title sequence of every episode; the balloon was incorporated into the show at Hasbro's request.[1] It appears in several episodes and other media, but it is only named in its associated merchandise and some promotional material.

Outside of the recurring title sequence, the Twinkling Balloon appears in several episodes.

Pinkie Pie and Spike use the Twinkling Balloon to report on the Running of the Leaves race in Fall Weather Friends. The ponies use it to fly to Cloudsdale for Rainbow Dash's competition in Sonic Rainboom. Pinkie uses the balloon again in Party of One to provide her Singing Telegram to Rainbow Dash in her cloud home.

In The Return of Harmony Part 2, the ponies use the Twinkling Balloon to fly with Fluttershy in order to capture the brainwashed Rainbow Dash. In The Mysterious Mare Do Well, Cherry Berry rides the balloon and it ruptures, plummeting toward the ground. Cherry Berry gets whisked out of the balloon by the masked pony later dubbed "the Mysterious Mare Do Well", and Rainbow Dash subsequently collides with the balloon, crashing with it at the base of a tree.

In Wonderbolts Academy, Twilight Sparkle and friends use the Twinkling Balloon to access the Wonderbolt Academy. Cherry Berry, with her helmet, lets other ponies ride the balloon in Spike at Your Service, and at Applejack's barn she receives the balloon back, looking quite annoyed. In Magical Mystery Cure, Fluttershy gives Cherry Berry bits in exchange for use of the balloon.

After a rather lengthy absence, the balloon makes its return in The Hooffields and McColts. Twilight and Fluttershy use it to travel to the Smokey Mountains.

In The Gift of the Maud Pie, the balloon is pictured on a "For Sale" sign.

The balloon is seen outside Rainbow Dash's Cloudominium in The Cart Before the Ponies.

In A Flurry of Emotions, a toy version of the balloon (with a different color scheme) appears when Flurry Heart plays with Pound Cake and Pumpkin Cake.

In Not Asking for Trouble, Pinkie Pie and her friends use the balloon to travel back and forth between Ponyville and Yakyakistan.

In Yakity-Sax, Twilight and her friends take the balloon to Yakyakistan to visit Pinkie Pie.

In Sparkle's Seven, Pinkie Pie uses the balloon to drop Fluttershy and Spike off at Canterlot Castle and attempt to go into space. However, Spike deliberately tears a hole in the balloon, causing it to go flying out of control.

The balloon and a pony in it are silhouetted by the Explore Equestria logo.

The balloon appears in the Comic Con 2011 poster with Cherry Berry piloting it.

The Twinkling Balloon appears in Gameloft's mobile game, carrying characters that have been purchased but not welcomed. Multiple balloons can appear simultaneously. The color scheme differs by location.

In the Signature My Little Pony magazine issue 69 comic Daring friends and the missing story!, Twilight and Starlight Glimmer use the Twinkling Balloon to travel to AK Yearling's house.[2]

The Twinkling Balloon appears in multiple commercials, including a toy commercial in which Applejack says "It's Twilight Sparkle's balloon!"

In the first episode of PonyChat, Elle on the Inside identifies the balloon as the "Twinkle Twinkle Air Balloon".

There is a McDonald's Happy Meal "interview" in which Pinkie Pie says "I can fly in my balloon". 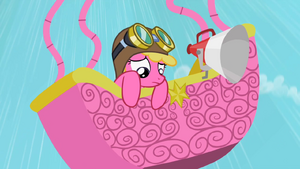 Retrieved from "https://mlp.fandom.com/wiki/Twinkling_Balloon?oldid=2078424"
Community content is available under CC-BY-SA unless otherwise noted.