Twist is a school-age Earth pony with a noticeable speech impediment and a student of Cheerilee's class at Ponyville Schoolhouse. She was one of the few "blank flanks" in her class besides Apple Bloom, Scootaloo, and Sweetie Belle until she received her cutie mark in Call of the Cutie: two candy canes in the shape of a heart. She is called Twist-a-loo and Peppermint Twist in some merchandise and other media.

Twist shares her name with a G1 So Soft pony. At some point prior to May 21, 2010, Twist's design was discussed when Lauren Faust was at Studio B Productions (now DHX Media Vancouver); Sabrina Alberghetti "was the one on the crew that was fighting for Twist's design to stay the way it was".[2] Twist is slightly taller than normal foals, as she has skinnier legs and her nose is more bulbous than most other ponies. She shows several stereotypical nerdy traits, such as a curly red mane and tail, pale coat, large glasses, and a nasal lisp. Her design is also used with a different mane and tail color for one of the nurses in Read It and Weep.

In the original lyrics of Smile Song, Pinkie Pie asks a pony named Shimmy Shake, "How did Twist do on her last spelling test?"

According to M. A. Larson, Twist has been silent in recent seasons because her voice actress no longer lives in Vancouver.[3]

Twist makes her debut appearance in Call of the Cutie. She is picked on for being a "blank flank" by Diamond Tiara and Silver Spoon, until she discovers that her special talent is crafting confectionery, and she earns her cutie mark.

Twist appears again in The Show Stoppers during the reward ceremony at the talent show next to Diamond Tiara and Silver Spoon.

Twist appears during the school field trip at the beginning of The Return of Harmony Part 1. She also appears in The Cutie Pox, joining in with Sweetie Belle and Scootaloo's attempts to guess what Apple Bloom's cutie mark was meant to be, thinking it was a delicious powdered donut. She remains next to the two Crusaders as they all watch in awe of Apple Bloom's loopty-hoop stunts.

Twist makes a background appearance in Family Appreciation Day. Apart from Diamond Tiara, she's the only pony to be remotely paying attention to Filthy Rich's story. Later, she and Truffle hang out with the Crusaders at Sweet Apple Acres and help make Zap Apple Jam.

Twist appears at the start of Hearts and Hooves Day, where she gives a Hearts and Hooves day card to a happy Truffle, and the two hug. She then plays "Pin the Heart on the Pony", resulting in accidentally pinning the heart on Cheerilee. She also makes a background appearance in Ponyville Confidential, where she is among the young ponies celebrating Featherweight earning his new cutie mark.

Twist appears in Slice of Life with other ponies observing the Mane Six in Ponyville. In Crusaders of the Lost Mark, Diamond Tiara mentions that Twist wished to fix a window broken by Discord.

Twist, along with the rest of the school ponies, meets Coloratura in The Mane Attraction. She also appears in The Cutie Re-Mark - Part 2 during Queen Chrysalis' alternate-timeline in a hut with "Candy Mane", and during Friends Are Always There For You.

In On Your Marks during Out On My Own, Twist appears alongside "Lily Longsocks" baking a pie. She also appears in the final group shot of A Hearth's Warming Tail, next to Cheerilee and Truffle.

In The Cart Before the Ponies, Twist appears during Cheerilee's physics lecture and leaves the schoolhouse with "Shady Daze" after class.

In Fame and Misfortune, Twist briefly appears in line outside the Schoolhouse to receive a copy of the Journal of Friendship from Princess Twilight Sparkle.

In Marks for Effort, Twist briefly appears running out of the Schoolhouse with Snips, Snails, Pipsqueak, Featherweight, and Rainy Feather.

In She's All Yak, Twist appears in the reused image of The Cutie Re-Mark - Part 2 during Fit Right In. In The Last Crusade, Twist appears in Cheerilee's class and at CMC Appreciation Day. In Growing Up is Hard to Do, Twist appears at the Ponyville School during during Being Big is All It Takes.

In The Last Problem, Twist briefly appears as a fully grown mare in future Ponyville and also as a filly in Rarity's group shot during The Magic of Friendship Grows.

In the IDW comics, Twist appears in My Little Pony: Friendship is Magic Issue #8 as part of the battle for Ponyville on page 12. On page 14, Apple Bloom tells Princess Luna that she's as much a member of Ponyville as other ponies like Twist - to which Twist appears with a joyful "hiya!"

Twist appears in the Ponyville Mysteries books Schoolhouse of Secrets and The Tail of the Timberwolf. In the latter book, she is inadvertently turned into a candy-craving timberwolf that terrorizes Ponyville.

Twist is one of the available playable characters in Gameloft's mobile game.[4] The game sometimes lists her as Peppermint Twist.[5] Her in-game description reads, "A school-age pony with bright purple glasses and a curly red mane, Twist has a candy cane heart for a cutie mark." Future Twist was available as the top community prize for the "Cutie Mark Deuxsaders" event. Her bio states, "It isn't ours to speculate on Twist's future, but she'll probably need a slightly stronger prescription on those glasses."

TWIST was picked on because of her blank flank until she discovered was making sweet treats when two peppermint candy canes appeared on her hindquarters—her cutie mark!

TWIST puts the cutie in cutie mark. Her sweet confectionary skills earned her a candy cane heart, which she puts to good use making sugary treats.

"Isn't my cutie mark swell? I've always loved making my own favorite sweets, but it took me some time to discover that it was my super-special talent. Pretty sweet, huh?"
— Call of the Cutie

"Or is it a powdered donut? 'Cause that sounds delicious."
— The Cutie Pox

"Will this be on the test?"
— My Little Pony: Friendship is Magic Issue #52

"If I ever thee another monthter, I'll know which ponieth to call!"
— My Little Pony: Ponyville Mysteries: The Tail of the Timberwolf 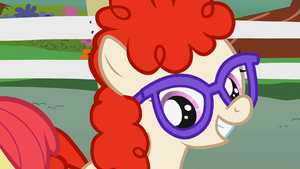