Uncommon Bond is the twenty-fourth episode of season seven of My Little Pony Friendship is Magic and the one hundred and sixty-seventh overall.[1] The title is a play on the phrase "common bond".

This episode premiered on Canada's Treehouse TV channel on October 15, 2017, six days prior to its scheduled airing on Discovery Family. It was also scheduled to air on Polish television channel MiniMini+ on October 19, 2017, but it was replaced with a rerun of Hard to Say Anything.

A lot in common

At the Ponyville train station, Starlight Glimmer anxiously awaits the arrival of Sunburst, bragging to several ponies that she has more in common with him than any other pony in Equestria. When Sunburst arrives, Starlight looks forward to spending time with him and doing all the things they used to do together, like practice magic and play games. However, Sunburst also wants to do some antiquing, an activity that Starlight had no idea he was interested in.

At the antique store, Sunburst marvels at the various antiques and relics on display, but Starlight shows barely any interest. The two run into Twilight Sparkle, and she and Sunburst bond over their shared interest in antiquing, causing Starlight to feel left out. Sunburst notices her lack of enthusiasm and says she doesn't have to pretend to like antiquing, but Starlight appreciates how much he likes it himself, even as Twilight and Sunburst bond further at the Castle of Friendship.

When Twilight and Sunburst notice how left out Starlight is feeling, they ask her what she wants to do, and Starlight takes out her and Sunburst's favorite board game from when they were little: Dragon Pit. After an afternoon of playing, Starlight helps Sunburst get settled in. She tries to discuss what they'll do together the next day, but all Sunburst can talk about is how well he and Twilight get along.

"I probably have more in common with Twilight than any pony in Equestria!"
— Sunburst

The next day, Starlight wakes Sunburst up before the sun's barely even begun to rise. With Twilight busy with her princess duties, Starlight is excited to spend time with Sunburst alone. She takes him to see the apple trees at Sweet Apple Acres, and when Starlight demonstrates some applebucking, she drops some apples on Trixie's head. Trixie offers to show the two a new escape trick she's been working on, and Sunburst eagerly accepts. Unfortunately, the trick doesn't go well, prompting Sunburst and Starlight to assist.

Being interested in stage magic himself, Sunburst unexpectedly bonds with Trixie as well and they share stage tricks with each other, causing Starlight to feel left out again. Later that day, Starlight takes Sunburst to see the magical Mirror Pool, and they run into Maud Pie, whose new cavern home is connected to the Mirror Pool's chamber. As Maud continues her geological studies, Sunburst joins her, having a moderate interest in geology as well. Once again, Starlight feels left out and leaves.

Soon after, Twilight finds Starlight sulking by herself in the castle library. Starlight confides in Twilight that she and Sunburst had so much in common when they were little, but now she feels like he has more in common with her friends than he does with her. Twilight tells her that everyone changes over time and that they still have a common interest in magic, and this gives Starlight an idea.

Some time later, Sunburst meets up with Starlight in the throne room, and Starlight shows him a new spell she invented. She uses her magic to turn the throne room into their old childhood home and revert themselves to the size of foals so they could relive their foal days of playing Dragon Pit together. Sunburst, uncomfortable with the lengths to which Starlight is going to spend time with him, angrily says he doesn't want to play, and Starlight undoes the effects of her spell. When Twilight enters to see what's going on, Starlight leaves the throne room in tears.

"I was trying to have fun doing the one thing I thought we still had in common, but I guess we don't even have that anymore."
— Starlight Glimmer

What we have in common

Twilight guides Starlight to the library, with Starlight feeling like she and Sunburst have grown so far apart that he doesn't want to be her friend anymore. Twilight proves her wrong by showing her what Sunburst, Trixie, and Maud put together in the library: a life-sized version of Dragon Pit. Starlight is touched by Sunburst's gesture and joins in.

A few days later, Starlight, Twilight, Trixie, and Maud see Sunburst off at the train station when he leaves. Starlight and Sunburst agree that it doesn't matter what they have in common as long as they enjoy each other's company. As Sunburst leaves on the Friendship Express for the Crystal Empire, he looks through the mystery contents of a barrel he bought at the antique store. One of the items inside is an old, musty book with Star Swirl the Bearded's cutie mark on the cover.

Starlight Glimmer: Excuse me. When does the noon train from the Crystal Empire arrive?
"All Aboard": Uh... noon?

Sunburst: Did you see this Palominian letter opener?
Twilight Sparkle: Wow! That goes well with this ancient phoenix feather quill! We could write to each other!
Twilight Sparkle and Sunburst: Pen pals!

Sunburst: I know she's a princess, but I never thought she'd be so fun to just hang out with.
Starlight Glimmer: Well, she is the Princess of Friendship.

Starlight Glimmer: Trixie? What are you doing here?
Trixie: Huh. I often seek the privacy of the orchard to practice new feats of amazement. And also, I fell asleep.

Trixie: Starlight, why didn't you tell me how much Sunburst and I had in common?
Starlight Glimmer: [sarcastic] Gee. I don't know.

Maud Pie: I'm studying this area's metamorphic—
Sunburst: —foliation. Is this gneiss, phyllite, or slate? Wow. The pressure above must be pretty uniform to get the planar fabric to be this consistent.
Maud Pie: You know about geology?
Sunburst: Eh, I dabble.

Sunburst: It is surprising how well I get along with all of her friends, but she and I still have tons in common.
Twilight Sparkle: Maybe you just need to remind her what those things are.
Sunburst: That's it! That's exactly what I'll do! Uh, right after I think of them.

Trixie: I can think of something you have in common. You're both poor practice audiences.

Twilight Sparkle: You still want to be friends, right?
Starlight Glimmer: I created a spell so we could relive playing a game in our childhood home... and bodies.

Starlight Glimmer: I want to hear if you find anything interesting in that barrel.
Sunburst: Trust me, Starlight. You'll be the first to know. 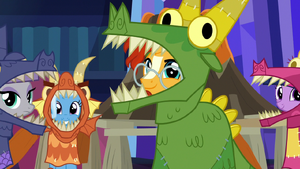