Uprooted is the third episode of season nine of My Little Pony Friendship is Magic and the one hundred and ninety-ninth overall.[1]

In this episode, the Young Six respond to a magical summons from the Tree of Harmony, only to learn it has been destroyed, and it is up to them to figure out the best way to memorialize it.

The episode begins in a collective dream shared by all of the Young Six: Silverstream dreams of becoming the first non-Pegasus member of the Wonderbolts, Ocellus dreams of missing an entire year's worth of classes and having to take a final exam in order to graduate, Yona dreams of plummeting out of the sky, Smolder dreams of having a tea party in a cute dress, Gallus dreams of being trapped in a small space, and Sandbar dreams of having to choose between multiple snacks to eat.

The Tree of Harmony's transparent projection of Twilight Sparkle that appeared to the Young Six in What Lies Beneath appears before them again, having summoned them into the same dream space. She ominously tells the Young Six that the Tree needs them, and they wake up from their shared dream.

The next morning, at the School of Friendship, Twilight races to get everything ready for the new school year when the Young Six arrive, far earlier than Twilight expected them. When they explain that they were summoned by the Tree of Harmony, Twilight and Spike inform them that the Tree—as well as the Elements of Harmony—were destroyed by King Sombra. This comes as devastating news to the Young Six, who had felt a special connection to the tree since the year before, and they ask to see its remains for themselves.

How to honor the Tree

In the cave underneath the Castle of the Two Sisters, the Young Six see what remains of the Tree of Harmony and mourn its loss. At Gallus' suggestion, the six friends decide to honor the Tree's memory in some way, believing this to be the reason it summoned them. However, Thorax arrives and angrily reprimands Ocellus for leaving the Changeling Kingdom without telling anyone. When Ocellus' friends explain the situation, Thorax allows Ocellus to stay, and Twilight lets the rest of the Young Six stay as well—as long as they also have permission from their respective kingdoms.

Back at their homes, each of the Young Six gets permission from their families and kingdom leaders to carry out their mission of helping the Tree of Harmony. By the time they return to the cave, Sandbar—who lives closest—has cleared away the Tree's remains entirely to make room for a small sapling replacement. His friends disapprove with his idea to memorialize the Tree, and they each have a different idea about how the Tree's memory should be honored. When they are unable to reach an agreement, Yona suggests coming up with an idea they all like, but the others refuse.

Gallus' idea to memorialize the Tree of Harmony is to turn the cave that houses it into a museum that embellishes its origins. Smolder's idea is to sculpt a giant rock statue of the Tree as a monument to its power. Silverstream's idea is to cover the cave's walls and floor in colorful paint. Finally, Ocellus' idea is to build a meditation garden with a water fountain and wind chimes. When the five ideas conflict with each other, it makes a giant mess of the cave.

A place where we belong

As Ocellus, Gallus, Smolder, Sandbar, and Silverstream all blame each other for the mess and failing to honor the Tree of Harmony properly, Yona breaks up the arguing and reminds them of what the Tree meant to them. They recall hiding together in the Castle above and later having their friendship tested by the Tree itself. The rest of the Young Six decide to work together, but they are still unsure of how to memorialize the Tree.

Using the Tree's remains that Sandbar set aside in a wooden cart, Yona comes up with the idea of constructing a treehouse, and the Young Six work together to build it while singing the song The Place Where We Belong. Although the treehouse turns out ugly and small when it is finished, the Young Six are satisfied and proud because of what it represents. All of a sudden, magic envelops the little, shabby treehouse and transforms it into a grand, crystal treehouse in the middle of the Castle of the Two Sisters' courtyard.

The spirit of the Tree of Harmony appears before the Young Six once again and commends them for keeping its spirit alive with their friendship and selflessness. Twilight arrives, having sensed a burst of magic from the school, and sees the grand treehouse that has appeared. The Young Six explain what happened, and Twilight reasons that the Tree and the Elements still remain, changing to suit Equestria's needs and needing the Young Six's help to do so.

"Your friendship is more powerful than you know."
— Twilight Sparkle to the Young Six

With the Young Six's mission complete, they, Twilight, and Spike decide to check out the interior of the new "Treehouse of Harmony".

Yona: Friends must be dreaming together!
Gallus: More like a nightmare!
Sandbar: I know, right? How do I pick just one? They all look so good!
Smolder: That's your version of a bad dream?

Twilight Sparkle: Spike! I have horrible news!
Spike: What's wrong? Is the Crystal Empire under attack again?!
Twilight Sparkle: What? No! We only have twenty highlighters! And they're all orange! How will everycreature color-code their notes?!
Spike: I'm pretty sure you're the only one that does that.
Twilight Sparkle: Still, twenty isn't enough for the new school year!

Silverstream: [gasps] Wait! We all saw and heard the Tree in our dream, right? How could it talk to us if it was really gone? Maybe if we close our eyes and think really strong friendship thoughts, the Tree will get better!
Smolder: Eh, I've heard worse suggestions.
Sandbar: [loud whisper] Is it working?
Yona: No.

Smolder: Wait! She can't leave! We have a... dragon quest!
Thorax: But she's not a dragon.
[transformation noise]
Thorax: You know what I mean.

Tree of Harmony: Because of you. The spirit of the Treehouse would have perished without your selfless deeds and caring. Whenever you seek solace, come here. Your friendship, and the friendship of future generations, will always be safe within these walls. 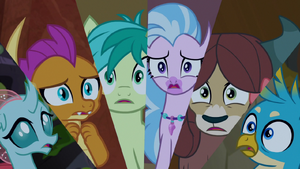