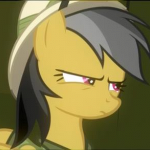 How do I view all my badges? Also, proof that I got this one:

I recently went to Target and bought some toys, because the Merchandise article (and an Equestria Daily post) said that they came with a DVD that had "Applebuck Season" on it. I was disappointed to find that the episode was actually "The Ticket Master" instead. I am not happy about this!

You see this? Who the heck is this?

Hello, Rarity. Are you a spy? (Hurr hurr hurr!)

I thought Rainbow Dash's pet was a turtle!

Is this supposed to resemble the dress Twilight wore in "The Best Night Ever"?
Add a photo to this gallery

Check out the first song of season 3! The Failure Song

Vote tally (as of March 4th)

At Forum:Dogman15 admin rights Graph made using: http://nces.ed.gov/nceskids/createagraph/default.aspx Graph hosted at: [1] I just realized I totally forgot to count one or two "support" votes, so that number may be as high as six.

Retrieved from "https://mlp.fandom.com/wiki/User:Dogman15?oldid=1218664"
Community content is available under CC-BY-SA unless otherwise noted.