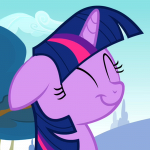 "Reality is that which, when you stop believing in it, doesn't go away." - Philip K. Dick, How to Build a Universe That Doesn't Fall Apart Two Days Later

"Don't you remember? We built this city on rock and roll." - Starship, We Built This City

"If you start a sentence with the words 'to be honest', you must finish it by saying 'and now, back to the lying!'" - Stephen Colbert, "Big Furry Hat" segment

"The inside of a snake is there whether you see it or not" - Somnambula, Legends of Magic Issue 5

"Can you believe Featherweight got his cutie mark? Featherweight. Before us." - Sweetie Belle, Ponyville Confidential

"Teach her to fool with the Cutie Mark Crusaders!" - Sweetie Belle, One Bad Apple

"Is it because you were insulted when I insulted your hair?" - Rarity, The Last Roundup

"We could take a little break, but--we don't need it" - Cutie Mark Crusaders, Flight to the Finish

"Love the new hat. Very modern. What's the occasion?" - Rarity, Party of One

"Everypony has fears, Scootaloo. Everypony must face them in their own way. But they must be faced, or the nightmares will continue." - Princess Luna, Sleepless in Ponyville

Crusaders of the Lost Mark*

(*=honorary; my ratings for every episode are listed here)

Hearts Strong as Horses (including reprise)

I realize this is cheating, but literally every song from Crusaders of the Lost Mark (which is why it's in my 5/5 Allstar League)

Time to Be Awesome

My Opinion of the Show By Season

My Opinion of EG

Having only seen the movies, I can say the first one was alright but the others didn't do it for me. Part of what makes MLP so great in my book is the joy of watching what are basically stuffed animals behaving (or trying to behave) in such a human manner; with that lifted from the equation, character actions don't have any inherent charm, which puts the enjoyment floor a lot lower. Not devoid of entertainment value, but not of the same caliber as the regular show.

A Few Things in the Show That Mildly Annoy Me

During a song or chant, when character movements de-sync with the rhythm (if it's apparent that they were initially meant to be in sync).

Also, 'countryisms' that feel more tacked-on than called-for, like "sure as applesauce".

I occasionally use this site to record my thoughts on aspects of humor and storytelling as they appear in My Little Pony: Friendship is Magic. I legitimately find the first five seasons of this show to be very enjoyable to watch on account of their aesthetic charm and humorous writing, as well as their ability to address deeper and very human issues such as loss, crisis of identity, strained familial bonds, fear of loneliness, and others. In contrast, I find nearly everything from season six onward to be altogether very different and uninteresting.

I am currently a doctoral student in music composition. I don't really identify myself as a "brony" more than a typical adult heterosexual male who enjoys silly things such as are abundant in the early seasons of this show. I'm a passive fan of cartoons from my childhood such as Ed, Edd and Eddy, The Powerpuff Girls, Dexter's Laboratory, and others. I'm not one for Japanese anime though I remember enjoying DBZ and Pokemon back in the day, and I hold in high esteem certain works such as Cowboy Bebop and Spirited Away. Aside from MLP:FiM, however, I don't watch movies or TV; most of the rest of my entertainment comes from writing music, playing video games, reading, playing piano/singing, or perusing youtube.

I transcribe dubbed MLP:FiM episodes and post them on the respective versions of this site under the same username. Currently:

Episode: Somepony to Watch Over Me (Una Poni Para Cuidarme)—existing transcript is incomplete

Online game communities of which I'm a part:

Retrieved from "https://mlp.fandom.com/wiki/User:Fluffbrain?oldid=2151757"
Community content is available under CC-BY-SA unless otherwise noted.