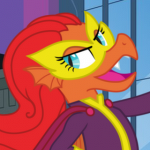 aka Dove aka The Crusade

5. Inspiration Manifestation—The episode explores a side of Spike's relationship with Rarity that comic Issues 5-8 touched upon only slightly. Saying no to the object of one's love is no easy task, and this episode explores the struggle well.

4. Twilight's Kingdom—My Season 4 wishlist included a villain who would reminded Discord he could have friends with less rules than the ponies. That wish came true in this two-parter. I believe the first of the two parts is stronger.

3. Do Princesses Dream of Magic Sheep?—Here we finally see the real damage Nightmare Moon did to at least one of the two sisters. We also see the return of the Power Ponies, some action on Rainbow Dash's part, and an all-around poignant story which explores some more feelings that Issues 5-8 failed to, namely Luna's overwhelming guilt.

2. Griffon the Brush Off—Gilda is the character who lured me into watching the show, and I still believe this episode is one of the strongest in the series. A simply entertaining bully and an outstandingly mature lesson make this one a twenty-two minutes to remember.

1. Leap of Faith—Another item on my Season 4 wishlist was an episode concerning Granny Smith and a youth potion. Lo and behold, that wound up happening too. Applejack shines brighter than ever here, and the return of Flim and Flam is a nice bonus. Silver Shill is a very respectable one-off character.

10. It's Gonna Work—I'd not have expected a Bollywood duet between Rarity and Pinkie Pie to be so impressive. The lyrics are not especially insightful, but they are easy enough to learn that the song lingers in the mind for some time.

9. Tricks Up My Sleeve—Appropriately great and powerful. Easily one of the best songs to emerge from Rainbow Rocks too. Trixie got cheated out of her shining moment.

8. I'm the Friend You Need—I had my doubts about Capper, but his introduction put them to rest. He absolutely oozes poise and charisma, even if he remains shady in more than one sense all the while.

7. My Little Pony theme song—The real reason why I rewrote this list. How could I forget the theme song? It is so energetic and promising, and the show more often than not delivers. It's worth the anticipation before every episode.

6.Open Up Your Eyes—Tempest Shadow manages to put on an even grander show than Capper's littly ditty, if only by a small margin. The thunderous percussion and heavy brass set this one high above the average. However, I find that it slows down too much in the middle to qualify as the best villain song.

5. Winter Wrap Up—The lyrics are not anything special, but the tune of this one is beyond catchy. I would even consider it the definitive song of Season 1. I still hum it in the elevator sometimes, particularly during the winter season itself.

4. In Our Town—Season 5 opens with a song charged to the max with cultism. It sets the bar high for the season and remains one of the most memorable songs of the series. Our Town is yours. None shall interfere.

3. Battle—Rainbow Rocks is a nasty piece of work. It is all about a battle of the bands, but only two good songs come out of it. The first is Trixie's solo. The second is this delightful siren-song. Even I admit this one is gold.

2. This Day Aria—Just perfect. I think Queen Chrysalis has a more pleasant singing voice than Princess Cadance, so I consider the reprise the better of the two parts.

1. Bats—Easily one of the most genuine conflicts we've witnessed among the Mane Six. Bats shows Applejack at her most pragmatic and Fluttershy at her most empathetic. They clash beautifully, even if the other four happen to be using their brains over their hearts too.

5. The Root of the Problem

1. Reflections
Add a photo to this gallery

1. Kibitz
Add a photo to this gallery

Best of the "Mane Eight"

5. Applejack—What's not to like about a hefty farm-pony? Well, there is one thing: though she works with the earth, she has some personal habits that are too icky for my taste. Otherwise, this is a good and respectable pony. Sometimes the simple things are the best.

4. Pinkie Pie—I have known a few Pinkie Pies in my life, one of whom could not even walk down the street without identifying and greeting at least three people he knew for completely different reasons. I was there. On the topic of the actual pony, she is a strong comedic core for the cast and an all-around good role model.

3. Starlight Glimmer—Passable as a villain but initially uninteresting otherwise, Starlight has shone brightly in the Season 6 premier and the incident of her failed sixfold lesson. We have something in common: I am good at just about everything I do, but upon reflection, I may be so because I avoid what little I'm not good at. Throw in looks that could kill, and we have what I could call a winsome pony.

2. Rarity—The accent, the posture, and the marshmallow-y goodness of Rarity make her delightful in moderation. Three consecutive episodes in Season 5 was too much Rarity, so I am a little tired of it, but Rarity is a quintessential gem of a character. There is little that beats this kind of melodrama and charm.

1. Rainbow Dash—Rainbow Dash is what beats Rarity. It is a tough choice, but Rainbow is better simply because her character brings more aggression and action to the table. She also has a knack for striking poses, though she does so to inspire awe rather than to exhibit a habit. Talk about professionalism.

BEST CHARACTERS OF THE SERIES

10. Fleetfoot—I have liked the design of this Wonderbolt since day one, but moments like when she gets spoony over Bic McIntosh and when she brings back the nickname "Rainbow Crash" make her wickedly entertaining. Fleetfoot is an utter card, especially for a character only a notch above the average background pony. I will always be glad to see more of her.

9. Rarity—Here is a pony of many sides: sometimes soft and ladylike, other times fierce and dramatic, and occasionally something else entirely. She is one of the few characters whose personality is her weapon of choice, and her personality is comparable to a Swiss Army knife. In light of such failures as that of the Diamond Dogs, underestimate Rarity at thine own peril.

8. Limestone Pie—Assertive. Forceful. Domineering. Masterful in the study and application of rocks. If a pony were my spirit animal, it would be the rustic, stony, one-and-only Limestone Pie, whose foreboding eye petrifies her fellow ponies and crumbles mountains to dust. What else is there to say about the lithic menace? Paws off Holder's Boulder.

7. Cherry Jubilee—This "western" belle is so ridiculously matronly that it is hard not to enjoy her presence on the stage. She looks her part. It almost seems ironic that such an imposing figure should deal with such small produce, but one cannot have Cherry Jubilee without a load of cherries. The accent is also as delicious as any fruit. I do not even like cherries.

6. Princess Ember—Ponies are cuddly and all, but a sleek dragoness is a nice change of pace. She has a laudably hands-on approach, even if she seems to have a knack for getting in over her head... in more ways than one. On her own, she is futilely heroic. In the company of others, she is an admirable ally. Ember is going to be on this list for a long time.

5. Rainbow Dash—While Ember is a fresh action hero, it is hard to compare to the original Rainbow Danger Dash. Having had many episodes to develop, Rainbow is vastly superior. Her being a fancy flier is another plus, and yet she somehow manages to be one of the most laid-back characters in the series. A supremely well-rounded character and very nearly the best pony.

4. Lord Tirek—I asked, and I received. I wished to see a villain who would show Discord he could have better, more chaotic friends. Then Lord Tirek arrived to fulfill that wish. And yet the raw power, intellect, and enormity of this character make him thoroughly enjoyable in his own right. His evil purpose? Unimportant. For Tirek, power is an end in itself.

3. Queen Chrysalis—The changeling queen manages to combine the decorum of a monarch with the brutality of a predator and remain a comically entertaining character. That by itself is impressive. However, Chrysalis goes a step beyond even this and establishes herself as the most unrepentantly evil character in the franchise. I have compared her before to Count Dracula, and I stand by that comparison. Chrysalis is enjoyable for many of the same reasons as the Count, and yet she is unique in her villainy.

2. Gilda—The original griffon is a classic bully and a good example of a character whom the protagonist should not want to befriend. Gilda's debut episode does a fine job of emphasizing the importance of saying no to "false friends" while presenting an interesting and unprecedented design for this one character, who happens to utilize all of the tropes she has inherited just right.

1. Princess Celestia—I wrote an entire blog post about why Princess Celestia is my Number #1. How does one contain her glory to one paragraph? She can be strong, tragic, comedic, and unbelievably jolly, sometimes all at the same time or in rapid succession. It is interesting to see what makes that radiant smile waver. The elder Alicorn sister has won by undying support. The sun be praised. (sun)

Retrieved from "https://mlp.fandom.com/wiki/User:Guildmaster_Grovyle?oldid=2167041"
Community content is available under CC-BY-SA unless otherwise noted.