Kilmarnock228 is a big fan of My Little Pony Friendship is Magic, though admittedly he never expected to be. He enjoys shipping various characters and speculation, but does not support:

Things I Wanted/Expected to see in the Series

MORE BAT PONIES!
(Or Thestrals, to give them a cooler name) I mean, would it be so hard for the Cutie Map to send somebody to see them?

Big Mac becoming an Alicorn for real-or at least A male Alicorn. Cliche as the "long-lost evil sibling" idea is, I liked the concept behind Cosmos.

I'm not the only one who feels this way, but they should really put the kibosh on Spike's crush on Rarity-and he already has a great alternative. 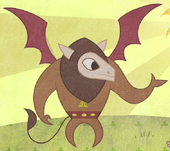 More Scorpan would be nice. I like the idea for him from The Art of My Little Pony: The Movie, if not the entirety of the book itself.

On the subject of Parental Glideance, it'd be nice to know what Rainbow Blaze's deal is now that we know he's not Dash's dad-I'm thinking brother or uncle.

The events of The Crystalling - Part 1 also seem like an opportune moment where an Umbrum or two could have escaped, leading to the need for a more permanent means of dealing with them.

Some more of this guy, whom I have dubbed "Searchlight"-I wonder if he and Twilight don't have history beyond seeing each other around the castle, given his reaction to her in It's About Time.

It'd be cool for some media to revisit all the alternate timelines/realities from The Cutie Re-Mark and any others we've seen, like Reflections Equestria.

Another Power Ponies episode could be fun-perhaps involving the Power Ponies and Mane-iac coming to Equestria.

Some resolution to the Alicorn Amulet-seems a tad powerful to just have been hidden away.

Some answers about stuff like the Pony of Shadows' darkness, Ponhenge, Nightmare Moon and Tirek's escapes-stuff that the show has left hanging. 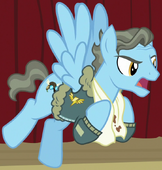 Some closure on one-time antagonists, whether from the show-like Wind Rider-or from other media-like Braze.

Some more media on the Founders of Equestria, perhaps with Ocean Wave (too cool for Equestria Girls) as the group's Spike/Humdrum/Stygian equivalent.

It'd be kind of nice to get Spike and Big McIntosh centered chapter books-or, if they can't have their own, maybe one with both of them.

It'd be nice to learn more about the Pillars and their relationships, particularly where Cattail and Shadow Lock (who it'd be nice to see again) came from.

Hoping we also get the conclusion of Sombra and Radiant Hope's search for Princess Amore at some point, and see how she feels about Cadance ruling the Empire. 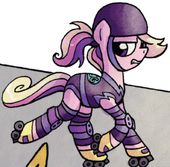 Speaking of Cadance, it would be awesome if it turned out she WAS Shining Harmer; might go well with that whole rage thing from Siege of the Crystal Empire.

While I hate Father Knows Beast, the Scale Collectors seemed like a cool concept; it'd be kind of cool if they were real.

Things I Would Change

The Castle of the Two Sisters

So back in Power Ponies the Mane 6 were apparently working to clean up and repair the Castle of the Two Sisters. The question is, why? The place lay abandoned for a thousand years, and it didn't seem like anybody needed to use it for anything; it hardly seems likely that Twilight was looking to use it as her own castle. If that wasn't what they were going for-and undoubtedly it's even more so now that the Castle of Friendship is in place-then what were they doing? And is the project still ongoing; Friends Forever Issue 35 seemed to indicate as much, but how much stock can we put in that?

One possibility that comes to mind-but one that seems unlikely-is that the Castle of the Two Sisters might have been intended for reconstruction into Luna's personal castle, with the one in Canterlot serving solely as Celestia's, but even that seems a bit of a stretch. Having seen Shadow Play - Part 2, it seems that the castle may have been intended as a base of operations for some group of Equestria's defenders. I could potentially see it reassuming that role now that the Pillars of Old Equestria are back on the scene, assuming that they wish to remain a group and don't take up residence in their former abodes. But whatever Twilight and co. were doing is a mystery-one of a number that we'll probably not get an answer to.

So Sunburst's comments from Issue #12 have me wondering: could Stygian truly have become a "Prince of Friendship" had it not been for his falling out with the Pillars? Sunburst seems to suggest something of the kind, and that's not the only evidence. Stygian's appearance as the Pony of Shadows-with wings or without-certainly contains elements reminiscent of the Alicorns we've seen thus far, particularly Celestia and Luna. Whether or not Stygian could have become and Alicorn, however, Sunburst's suggestion does make me wonder how Equestria's history might have unfolded had he not become a villain.

Might he have been able to help Tirek reform (assuming that Tirek's invasion happened in between the Pillars' uniting and their banishment to limbo) and thus prevent his future villainy? Could he have found a way to reason with Sombra, or mend feelings between the royal sisters before the Great Celestia-Luna Rift? Was the Changelings' reform a thousand years later than it could otherwise have been? And might Equestria have enjoyed greater relations with it's neighbors for a longer time, thus avoiding the problems of Party Pooped, My Little Pony The Movie, and School Daze - Part 2 among others?

So as I was contemplating various aspects of the series, I realized that there are two pony characters in the group of Twilight's inner circle and the princesses who are have been left out of certain trends in the series-see the title of this thread. It's just rather striking because they-particularly Starlight-seem to have been included in so many other of these aspects. Like the Mane 6, Starlight has been called by the Cutie Map, briefly taken on the appearance of a Crystal pony, and even-though this is really a low point in my opinion-received an Equestria Girls incarnation. However, the two biggest areas in which both she and Cadance have been excluded have been that 1: neither of them have had any sort of full-on transformation, and 2: neither of them has a pet. For comparison:

To be fair, Cadance is also the only member of this grouping who's married with a child, so she's unique in that regard. I just kind of wonder whether she or Starlight will ever join the others in these categories.

Community content is available under CC-BY-SA unless otherwise noted.