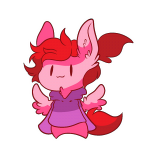 Lovestruck Dart was born in the Crystal Empire (she's part crystal pony) and lived with her mom, dad, and her older sister, Cosmic Spark. When Lovestruck turned two, the Crystal Empire was invaded by King Sombra and her family had to move to Ponyville where they were safe. A few years went by and Lovestruck went to school. There, she met Sweetie Belle and they became instant friends. At Diamond Tiara's Cutecinera, Sweetie Belle introduced Lovestruck to Scootaloo and Apple Bloom and told her that they were going to form a secret society. Lovestruck asked if she can join and they said yes and the four of them have became best friends and Cutie Mark Crusaders.

One day Lovestruck found a flyer that said that Summer Harvest Parade was coming up. So, she showed it to the Crusaders and she said that they could get their cutie marks in building a float. Then Apple Bloom announced that her cousin was coming to Ponyville. "Who is she?" Scootaloo asked. "Don't know. I never met 'er before. Heck, if she doesn't have 'er cutie mark, she probably join the Cutie Mark Crusaders!" Apple Bloom said.

Later at the train station, Lovestruck, The CMCs, and Applejack were waiting for her cousin to get here and Apple Bloom told us that she doesn't have her cutie mark. "So do you really think she want to join?" Scootaloo asked. "She doesn't have her cutie mark. Of course she'll join the Cutie Mark Crusaders." Apple Bloom said. Then the train pulled up and Apple Bloom was the most excited to see her. "Apple Bloom? you never met Babs Seed. Remember?" Applejack told Apple Bloom. 'Babs Seed? That's a really cute name.' Lovestruck thought. When Babs Seed showed up, Apple Bloom, Scootaloo, and Sweetie Belle were really happy to see her! "Babs! Babs! It's me! Your cousin, Apple Bloom! And this is Sweetie Belle! And this is Scootaloo! And we're so, so, so happy you're here!!!!"

"This is going to be the best week of your life!"

"Seriously though. You're gonna have a blast!"

While they were walking, Sweetie Belle said, "The Summer Harvest Parade is coming up while you're here. And you'll get to ride in a float!"

"Really? I've never been on a float befor-"

"And we have a really big surprise for you!"

Retrieved from "https://mlp.fandom.com/wiki/User:LovestruckDart1?oldid=2001772"
Community content is available under CC-BY-SA unless otherwise noted.