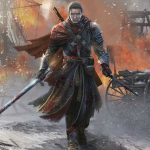 Hello, everypony! I'm Master Templar Shay. I may be a Templar, but I still have the heart of an Assassin!

I've never been more excited to watch a show in my entire life! Season 6 was the first season of the show where I can watch the episodes live as they aired on T.V., so I can't wait to see what the rest of the show has to offer me!

I actually started watching My Little Pony in December of 2015. Yes, that means I've only been watching since season 5 ended! Although I'm new to MLP, I feel as though I've been a part of this fandom for years! This show... this show really changed me. Before watching MLP, I was one of those people who said "MLP is for little girls!". But while I was watching a YouTuber who was reacting to another series on his channel, I noticed he had reaction videos to My Little Pony. So then I thought "I might as well give it a shot". The episode was "The One Where Pinkie Pie Knows" (I remember that very clearly). I really had a good time watching it. When I was done, I thought to myself "WHERE HAS THIS SHOW BEEN ALL MY LIFE?!?!" So I started from season one and kept watching from there. Since I spoiled myself during season 5, I already knew Twilight was going to become an alicorn, which didn't bother me, and the CMCs would get their cutie marks.

I'm sure not a lot of you will agree with me on this, but I actually liked Diamond Tiara and Silver Spoon before they were redeemed. Or any redeemed character for that matter. Of course, I was happy to see them get redeemed, but I didn't have a problem with them before it happened.

As for my favorite character... well, I don't have one. Or a least favorite character. I like all of them equally, including Spoiled Rich, Svengallop, and DT and SS (before and after their redemption). I just can't bring myself to hate any of them.

I don't really want to talk about personal stuff, but I will tell you this: thank you, people who I have already talked to on this wiki. All of you have been really nice to me since I joined. You've really taught me... that friendship is magic. OK, I'm gonna go now. Until next time, I'm signing off! <3

Retrieved from "https://mlp.fandom.com/wiki/User:Master_Templar_Shay?oldid=1842002"
Community content is available under CC-BY-SA unless otherwise noted.