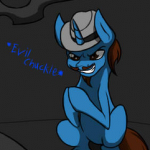 Hello everyone, I am Bobby Gulley or Bobby G. :) I love to draw, make new friends, watch movies, read books and a lot of stuff. ^^I mostly do voice acting and fanart. I am known as Voice Actor Bobby on my Youtube channel and I do fandubs on many Tumblr blogs, including Ask King Sombra and Ask Scissor Twilight. I also voice Conner the Savior in the Walking Dead Motion Comics by The Walking Bread.

Bios will be written as to why I love these characters! ^^

Retrieved from "https://mlp.fandom.com/wiki/User:VillainNut?oldid=2183498"
Community content is available under CC-BY-SA unless otherwise noted.