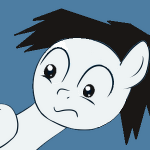 Welcome to the Friendship is Magic Wiki, FirePuppy!

Hi. I don't mean to sound rude, but is there a reason you're copying my idea of counting words in episodes? It's kinda rude and annoying. I'm only asking you to stop, for that's kinda my thing. Thanks and sorry for the inconvenience

Twilight role in the show diminished after Season 3 and has never recovered afterwards, she's practically just a shell of her old self. Starlight will probably have about a quarter to half a season of screen time, the rest will be filled with other characters.

And that's what it is, no one knows what will happen in Season 7 and that's why everyone is looking forward to it, I don't think many people are looking forward to the movie now that the trailer for Season 7 has been released and right now it's been mainly positive, some saying that the show is going in a different direction and trying out new things.

They do that because they don't want to reveal what is about to happen in Season 7 until that time comes, why did you think they released the info about EG, the movie and the comics earlier than the season, because we know that who is going to be the main characters and it's similar to what it was in previous years, that hasn't changed but not one fan knows about what is about to happen in Season 7, they didn't reveal Twilight being an alicorn until a few weeks before the finale. No one knows what will the intro looks like and from the looks of it, I don't think it'll be the same one as last years.

Where did I ever said that the Mane 6 needed to be removed, I never said that one bit, I always stated at times that Applejack needed a decent episode because her episodes were usually poor. She's the only decent one around.

You're practically just baiting users with that message there.

And you would do the same if someone said something about your character.

Now you're just coming up with nonsense, that site looks like it hasn't been updated in a few years, I'm pretty sure Sapphire Shores and Photo Finish hasn't appeared in a episode for quite some time and that Flurry Heart, Thorax, Starlight and Trixie played a major role in Season 6, it's clear that you hate Starlight, you just don't want to admit it.

You can keep arguing with me all you like but it's not going to make any progress since until more info comes out, none of us knows what is about to happen in the show. The show has come a long way from it's first season and it has moved away from the typical girl stuff and cliches to now appealing to young adults and teenagers, this isn't 2010 anymore.

Your "statistical" comments are beginning to border on spam, FirePuppy. You posted what is virtually the same comment four times on four pages. If you could, please try to avoid such duplication/reposting as there is almost never a need for it. Thank you.

Must you keep dismissing other users' wishlist blog posts because you think them improbable/they don't fit your own views on what episodes should contain?

Be that as it may, fans do not work on the show. There's no reason to continuously put down other users' ideas, regardless of whether or not they'll come true.

FirePuppy, would you please give the fearmongering a rest? Your obsession with appearance statistics are starting to become a disruption. "This character has to appear." "That character shouldn't appear again." "The main characters aren't main characters anymore." You're sounding like a psychotic conspiracy theorist. Thank you.

Please stop spamming "the next episode should be a Pinkie Pie episode"/"Pinkie Pie hasn't gotten an episode yet" comments. Further spam will result in a block. Thank you.

FirePuppy, it's not a good idea to make numerous consecutive edits without having a bot flag on your account. You risk unnecessarily clogging the Special:WikiActivity page. Wikilinks on gallery pages aren't terribly vital, and quotes and other quoted lines shouldn't have Wikilinks at all. I recommend looking at some of the Wiki's guideline pages, such as the style guide and categorization policies. Thank you.

That's even less of a good idea for frequent edits, FirePuppy. Badges/Wiki achievements should be earned through quality editing, not random edits here and there. Editing for the sole purpose of gaining badges is called "badge boosting", and it's not recommended on the Wiki. Hope you understand.

Re:I have one more question

You seem to think that the show revolves around where you want it to go like how Pinkie should appear with the CMC or how Applejack should have less appearances this season. You keep posting the same comments over and over again and it's starting to get repetitive. The show does not have to be consistent with things like how Rarity has the least amount of appearances compared to someone to Applejack who has the most amount. I don't demand things in the show, I just make assumptions and somehow they just come true to me.

Get your facts straight

FirePuppy, concerning your recent blog post about the MLP movie trailer, I suggest you at least try and get your facts straight (for example, asking your local theater's manager). At this point in time, you have no concrete proof that the trailer has been banned in any way and are just making wild assumptions (tantamount to fearmongering and spreading false information). And it would not be the first time.

Again, my advice would be to try and get all the (official) information you can before jumping to conclusions and assuming the worst in every situation. Thank you.

My response to your response

First off, I appreciate that you actually saw it and analyzed some things-honestly it seemed like one of those things I was doing more for my own amusement than at the thought that it would provoke any response. That being said:

Again, I appreciate your feedback; if you ever have any thoughts on my other subjects or have anything you'd like my feedback on, let me know.--Kilmarnock228 (talk) 22:47, September 7, 2017 (UTC)

Starlight Glimmer is not a main character because official material/sources do not designate her as such. It has nothing to do with my personal views.

Please do not casually discuss leaked content in the comments. See the Wiki's Community Messages and Forum:Regarding leaked information. Thank you.

Again, your beforehand knowledge of all the synopses for this season does not need to be advertised in article comments. Thank you.

Don't assume these rules are finalized yet. If you have something to input on the matter, please do so before carrying out any extended editing. Thank you.

The mlpforums link you shared in the comments features leaked content, a violation of the Wiki's current anti-leak policies. Once again, please do not share information/content related to leaked MLP materials. Thank you.

Again, discussing leaked materials in the comments is not permitted. Further dosregard will result in a block. Thank you.

Also, it's not just "one comment" about leaked content. You've been warned several times before (just read the warnings above).

Please leave the mass filling of appearance tables until the end of the season. There are a lot of tables to account for, and it is best left to users with bot flags so that the Special:WikiActivity page doesn't get flooded with updates. Thank you.

Okay, I promise, I will not ever touch that character appearance page again. But still, I'm always going to admit that you'll never let me do any real work on the MLP Wiki, as if I were indefinitely blocked from it. I was only trying to keep some things up to date. That's why I did this "fluff editing" that I don't even know what means. FirePuppy (talk) 23:25, August 4, 2018 (UTC)

Mass editing such as filling multiple character appearance tables can be construed as "fluff editing" or "badge boosting" (making edits just to obtain Wiki badges), which is discouraged. If you want to keep things up to date, feel free to focus on confirmed appearances ("Y", "S", "M", or "B"), and keep non-appearances ("N") until the end of the season. Thank you.

You should already be able to edit again. The block was only for 5 minutes.

Hey FirePuppy, thanks for filling in some info on the comic appearance tables in the Workshop. It's always nice to get a little help with them.--Kilmarnock228 (talk) 08:02, January 24, 2019 (UTC)

Hey Firepuppy, Rainbowderp01 here. I'm sure you've noticed that I haven't done word counts for the past... eh... 5 or so episodes? Don't worry, I haven't given up, I just haven't found the time lately. Don't worry, I'll get back to it soon so you can update your tables and charts and percentages and whatnot. Just thought I'd let you know!

Not a warning, but a request

Hello, FirePuppy. I'd like to ask that you tone down your references/allusions to God (or religion in general) in your comments, as at least one user on the Wiki has been made uncomfortable by it being so frequent. Thank you.

That's right, because from now on, my episode ratings are determined in individual blogs every week until the end of the season. FirePuppy (talk) 18:05, June 5, 2019 (UTC)

Please see the Wiki's Community Messages and Forum:The final episodes and the Wiki. Thank you.

FirePuppy, I don't think you read the forum Imperfect made. It says no stats about the early release episodes (except for writers), so I had to remove your stat. You can put it back in once the episode releases, but please, no more info about the remaining episodes until English releases. Thanks! --Mega Sean 45 (talk) 21:32, August 25, 2019 (UTC)

Of course I don't want an edit war, I just wanted to add the lyrics of the song Find the Magic in its gallery. —Preceding unsigned comment added by EDB (talk • contribs)

I understand why you deleted my workshop page about Luster Dawn, but when she actually gets a page, please use this file below:

Retrieved from "https://mlp.fandom.com/wiki/User_talk:FirePuppy?oldid=2171910"
Community content is available under CC-BY-SA unless otherwise noted.