Vapor Trail is a female Pegasus pony and Wonderbolts cadet who first appears in Top Bolt.

Vapor Trail first appears in the season six episode Top Bolt as an applicant to the Wonderbolt Academy. She is introduced as Sky Stinger's timid and soft-spoken best friend and wingpony. During the classroom portion of applicant testing, Vapor praises Sky Stinger's flying skills to instructor Rainbow Dash. However, it is revealed during freestyle training that Vapor Trail supports Sky when he flies by blowing wind under his wings. As a result, she pays no attention to improving her own flying.

In the cadet locker rooms, Vapor Trail explains to Twilight Sparkle and Rainbow Dash that Sky Stinger grew up with a lot of siblings and often competed with them for their parents' attention while she grew up as an only child with parents who smothered her with affection. When Sky struggled to impress his parents with his flying, Vapor gave him a wind boost and congratulated him for performing a flipping loop. Ever since, the two have always flown together, with Sky unaware of Vapor helping him and Vapor not realizing that her help was actually a detriment to his flying development.

Despite this, Vapor Trail wants to see Sky Stinger realize his dream of becoming a Wonderbolt, not concerned with becoming one herself. Twilight and Rainbow Dash help her achieve this by helping both her and Sky improve their flying. However, when Vapor eventually reveals to Sky that she's been supporting him and that he isn't as talented a flyer as he believes, Sky lashes out at her in anger, and the two have a falling-out.

Rainbow Dash later approaches Vapor Trail to compliment her flying, and Vapor comes to realize that being a Wonderbolt is indeed something she wants for herself. With Twilight and Rainbow's guidance, Vapor makes amends with Sky Stinger, and they assist each other in improving their flying skills. In the end, both Vapor and Sky impress the testing instructors enough to be granted entry into the Wonderbolt Academy.

In the season seven episode Parental Glideance, Vapor Trail makes a cameo appearance walking alongside Sky Stinger at the Wonderbolt Academy. They also briefly appear talking together at the Academy in Secrets and Pies.

Vapor Trail is a character in Gameloft's mobile game, and acts as an enemy minion during the "Wonderbolt for a Day" event. Her bio states, "She’s so set on helping her buddy soar higher... that few ponies know SHE’S a dynamite flyer!"

VAPOR TRAIL is a soft-spoken young Pegasus who starts her Wonderbolts trial week helping her best friend, Sky Stinger, perform his tricks...at the cost of her own flying ability. She learns that being a Wonderbolt really is important to her, and dedicates herself to improving her own flying, earning a spot at the Academy.

In the Defenders of Equestria expansion set of Enterplay's collectible card game, card #55 U of Vapor Trail lists the quote "Sometimes ponies just need a little boost. I've learned that there really is such a thing as too big of a boost."

Vapor Trail is featured in the "Wonderbolts Quest" section of the My Little Pony: Cutie Map Quest A Punch-Out & Play Activity Book, which was released prior to her debut in the series.

Vapor Trail's name is spelled as "Vapour Trail" in an official summary of the episode Top Bolt,[1] similarly to Shining Armor's name being spelled as "Shining Armour" in some materials.

"You were voted Stratusburg's most promising flyer! I was voted best sneeze. [sneezes]"
— To Sky Stinger, Top Bolt

"I guess I haven't thought about it. I just want to be with my best friend."
— Top Bolt

"I just wanted to be with Sky. But learning to do all those fun tricks with you? It made me realize this is something I want for myself!"
— To Rainbow Dash, Top Bolt

"Sometimes ponies just need a little boost. I've learned that there really is such a thing as too big of a boost."
— Enterplay collectible card game Defenders of Equestria expansion set card #55 U of Vapor Trail 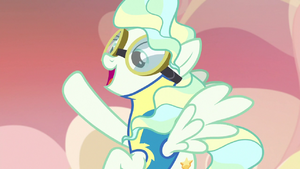