Viva Las Pegasus is the twentieth episode of season six of My Little Pony Friendship is Magic and the one hundred and thirty-seventh overall. The title is a reference to the tourist slogan "Viva Las Vegas", made popular by the 1964 film of the same name.

Applejack and Fluttershy are summoned to Las Pegasus by the Cutie Map to investigate suspicious goings-on at Gladmane's resort.

An event inspired by the episode, "Viva La Pinkie Pie" was included in Gameloft's mobile game.

Twenty-four weeks prior to the episode's scheduled premiere, a season six promotional image featuring Las Pegasus was posted on the My Little Pony Facebook page on April 2, 2016.[1]

Of the fifth and sixth seasons' Cutie Map episodes that are recapped by characters in My Little Pony: Cutie Map Quest A Punch-Out & Play Activity Book, this episode is the first of two such episodes whose scheduled premieres postdate the book's publication and August 2, 2016 release.

The background ponies featured in this episode were designed by Kora Kosicka, Charmaine Verhagen, and Fernanda Ribeiro.[2]

At the Castle of Friendship, Applejack and Fluttershy are alarmed to learn that the Cutie Map is calling them to Las Pegasus, a city reputed for being a wild vacation spot with loud noises and large crowds. Twilight Sparkle assures her friends that the Cutie Map would not have chosen them for this mission if they were not the perfect candidates.

Applejack thinks the city will not be as bad as she believes, but when she and Fluttershy arrive, they find it to be even noisier and more crowded than they imagined.

At a Las Pegasus luxury resort filled with games and carnival rides, Applejack and Fluttershy are overwhelmed by all the excitement and activity, believing that Pinkie Pie or Rainbow Dash would be more suited to such an environment. Applejack suggests they solve the friendship problem they were summoned to solve quickly so they can return home. As they explore the resort, they hear a barker pony promoting an event called Pone Fantastique and crediting the event's sponsoring to the owner of the resort, Gladmane.

Gladmane himself appears to greet Applejack and Fluttershy, pleased to meet the friends of Princess Twilight Sparkle. Calling himself a "friendship connoisseur", Gladmane credits the success of his resort to friendship and hard work. He offers to give the two a tour of the resort, and they accept so they can find the friendship problem they were called to solve.

In a backstage area, Applejack and Fluttershy meet several performers in Pone Fantastique, including a trapeze artist, the trapeze artist's director, and a pair of exotic animal trainers. The ponies they meet have nothing but praise and admiration for Gladmane.

At the end of the tour, Applejack and Fluttershy are surprised to find that everyone in Las Pegasus gets along very well. All of a sudden, they hear the familiar voices of Flim and Flam promoting Pone Fantastique. However, while Flim promotes the event's acrobatics act, Flam promotes the exotic animal act, and the two appear to be on sour terms. Fluttershy believes this is the friendship problem they were called for, but Applejack vehemently refuses to help them.

Gladmane explains to Applejack and Fluttershy that Flim and Flam have been arguing ever since they arrived at his resort. While he compliments Flim's showmanship and Flam's business sense, Applejack says they are better apart than together. Fluttershy suggests they help Flim and Flam, but Applejack still refuses and leaves to find other ponies with friendship problems.

Fluttershy speaks with Flim and Flam one-on-one and learns they had a falling-out over harsh words and a disagreement in business direction. Fluttershy tries to get them to reconcile their differences, but they refuse to even speak to each other. Meanwhile, Applejack discovers other arguments being had between the Pone Fantastique performers. A stagehand and one of the animal trainers state that the arguments between them prevent them from finding greater success outside of Gladmane's resort.

Applejack and Fluttershy meet up later in the resort cafeteria and share their surprise in finding three friendship problems in the same place. They also realize that the ponies' arguing only serves to benefit Gladmane—as long as they argue, they are forced to stay at his resort and make him money. However, when they talk to the performers about Gladmane's possible double dealings, the performers deny such claims and only praise the resort owner further.

Applejack and Fluttershy's suspicions about Gladmane are confirmed when Fluttershy speaks with the animals featured in Pone Fantastique: Gladmane deliberately causes arguments between the show performers in order to keep them working for him. But because he does it behind the ponies' backs, they remain ignorant to his deceit. Applejack wonders how to expose Gladmane's lies, and Fluttershy proposes they fight trickery with trickery by getting help from Flim and Flam.

Despite Applejack's reluctance, she and Fluttershy decide to help Flim and Flam reconcile. However, Flim and Flam do not believe their claim that Gladmane drove them apart. When asked precisely how they started fighting in the first place, Flim explains Gladmane told him that Flam thinks he is just a mouthpiece with no good ideas. Similarly, Flam heard from Gladmane that Flim thinks he has zero business sense. However, each brother's only proof that the other said such things is based on what Gladmane told them.

Applejack and Fluttershy assert that Gladmane keeps them apart in order to keep them from taking over his resort. Realizing that Applejack would never lie about such a thing, Flim and Flam agree to help them expose Gladmane's lies.

Flim and Flam have a plan

Following Flim and Flam's plan, Fluttershy disguises herself as wealthy pony "Impossibly Rich", with Flam posing as her guide. Flim informs Gladmane that Impossibly Rich is scouting locations to build a resort of her own and cut in on Gladmane's business. Feeling threatened, Gladmane enters to give Impossibly Rich a tour and asks Flam to meet him later in his office.

In Gladmane's office, Gladmane shares with Flam his intentions to own multiple resorts on the Las Pegasus resort strip and the threat that Impossibly Rich poses to such plans, revealing his crooked side. Later, as Gladmane shows Impossibly Rich around the resort, she and Flam try to get him to reveal the true, dishonest secret to his success using a microphone that Applejack and Flim have set up. Unfortunately, Gladmane sees through their ruse and laughs as he walks away.

Later, Applejack and Fluttershy confront Gladmane in his office directly and tell him to stop exploiting ponies' disagreements to his own ends. However, Gladmane gloats that his duplicitous form of friendship will soon bring all of Las Pegasus under his control, and that, as a professional conpony, he is always one step ahead. Unfortunately, Fluttershy had her hoof pressed on Gladmane's loudspeaker button the entire time he was talking, revealing his true nature to everyone in the resort.

The Pone Fantastique performers reconcile their arguments and subsequently quit as Gladmane's employees, ruining his business and reputation. Applejack and Fluttershy's cutie marks start to glow, indicating a successful friendship mission, and they realize it was Applejack's history with Flim and Flam and Fluttershy's inclinations toward kindness that helped them see it through.

With Gladmane no longer managing the resort, Flim and Flam quickly step in to take over, much to Applejack and Fluttershy's frustration.

Fluttershy: Uh, Applejack? It isn't as bad as we thought.
[crowds cheering]
Applejack: You're right. It's worse!

Flim: Don't let this price-gouging charlatan take you for a ride!
Flam: [gasps] Charlatan? How dare you!

Fluttershy: They certainly don't seem to be getting along. [gasps] You don't suppose we've been brought here to help them?
Applejack: Absolutely not!

Fluttershy: I'm sure you could work out your differences if you just sat down and talked to each other.
Flim and Flam: I'm never speaking to that pony again!

Fluttershy: Bernard – that adorable bunny from the acrobat's act – claims that every morning, Gladmane tells the director that the star wants control of the show, and every afternoon tells the star that the director wants to get rid of her! But neither is true!
Applejack: [snorts]
Fluttershy: And the Flying Prairinos – the pink prairie dog family – say Gladmane keeps changing their act to make each trainer think the other is doing it!
Applejack: So all his talk about friendship is just a load of applesauce! He's gettin' them all to fight with each other on purpose!

Fluttershy: Gee, if only there was a pony who knew how to trick a trickster.
Flim and Flam: [unintelligible arguing]
Fluttershy: Or maybe a pair of ponies?

Applejack: Sounds to me like neither of you said those things. Why'd you believe Gladmane when he said you did?
Flim: Why would he lie?
Fluttershy: Because he's afraid that the two of you together could move in and take over his resort.
Applejack: And if I'm tellin' you he said it, you know it's the absolute truth because—
Flim and Flam: You never lie!

Gladmane: I suppose I should be impressed. You're the only ponies to ever figure out the secret to my success. Takes a lot of work keepin' everypony fightin'. But as long as I keep 'em convinced that I'm their only friend, all of Las Pegasus will be mine. Oh, you can't trick a confession out of a pony like me! I'm always one step ahead.

Applejack: Gladmane has left the buildin'!

Applejack: Must've felt pretty nice to finally put all your connivin' and cheatin' skills to good use.
Flam: In fact, we like to think of it as a once-in-a-lifetime opportunity.
Flim: Emphasis on "once". 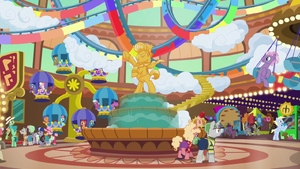