Walter is a male Earth pony who appears in the episodes The Cutie Pox and Slice of Life, dressed differently in each, and in the IDW comics, with a speaking role in Ponyville Days. He is unnamed in the show, but he is named variously in merchandise and other media.

Meghan McCarthy stated on the homage to The Big Lebowski and easter eggs in the show, "Very rarely are those things written into the script, but then when it goes to Studio B and the board artists and Jayson Thiessen, supervising director, I think they have a lot of fun. They have to populate this world with these background ponies and they’re like ‘oh, they’re at a bowling alley, eh?’"[4] A fan's thought that the bowler stallions' inclusion in The Cutie Pox "was just the animators amusing themselves, rather than a sop to the adult audience" has been agreed to by Jayson Thiessen.[5] Tim Stuby "had nothing to do with Lebowski" ponies.[6]

Walter appears alongside Jeff Letrotski and another Earth pony stallion at the beginning of The Cutie Pox. At the Ponyville bowling alley, he dodges Scootaloo's bowling ball as it careens across the building.

In Slice of Life, Walter appears with Jeff Letrotski and "Theodore Donald "Donny" Kerabatsos" at the Ponyville bowling alley. Dr. Hooves joins their bowling team in a championship game; when Dr. Hooves gets a gutter ball, Walter stands up and grunts in anger. Walter also appears at Cranky Doodle Donkey and Matilda's wedding holding a coffee can.

In The Big Mac Question, Walter appears bowling with the Dude and Donny at the Ponyville bowling alley, but Scootaloo interrupts his ball throw.

Walter appears on the IDW comics' My Little Pony: Friendship is Magic Issue #30 regular cover and, with several lines of dialogue, pages 6, 17, and 21 siding with Filthy Rich and Issue #31 pages 6 and 20 bowling with Mayor Mare. He also appears with Letrotski on the cover of the My Little Pony: Friends Forever Omnibus Vol. 1. He also appears at the end of My Little Pony: Ponyville Mysteries Issue #1 and in Issue #2 on the Ponyville bowling team asking the Cutie Mark Crusaders to solve a theft of bowling pins.

In Gameloft's mobile game, Walter is available as a playable character; he is referred to simply as "Bowling Pony" in gameplay and promotional material, but he is named in the game's internal code.[7][8][9] Initially, he had no cutie mark. His in-game description states he is "An Earth pony who who commonly frequents the bowling alley, although he doesn't roll on Saturdays."

Walter appears in a photograph in episode 3 of Baby Flurry Heart's Heartfelt Scrapbook, "All About Alicorns".

Walter appears on the Season 2 poster/DVD set packaging/T-shirt/WeLoveFine.com iPhone case and on The Art of Equestria page 38, is shown in an image from The Cutie Pox on the back of Enterplay trading card series 2 #60 card "The Three Strikes?", is collectively with Jeff Letrotski and "Theodore Donald "Donny" Kerabatsos" called "High Rollers" and given the description "There's nothing these gentleponies appreciate more than a few rounds of bowling and a fine beverage. Just don't step over the line" on Enterplay collectible card game expansion set Equestrian Odysseys #42 R card of them, appears on the WeLoveFine T-shirts "My Little Urban Achievers" and "Walter Pony".

"I don't think there's a bowling alley in Sweet Apples[sic] Acres, is there?"
— My Little Pony: Friendship is Magic Issue #30

"Are you thinking what I'm thinking?"
— My Little Pony: Friendship is Magic Issue #30

"Bowling tournament? Count me in!"
— My Little Pony: Friendship is Magic Issue #31 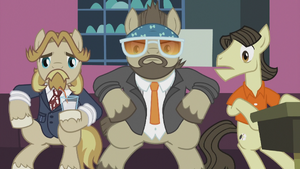 Retrieved from "https://mlp.fandom.com/wiki/Walter?oldid=2126769"
Community content is available under CC-BY-SA unless otherwise noted.