Warm Front is a male background Pegasus pony with a light brown coat, orange mane and tail, blue eyes, and a cutie mark of three blue horseshoes or raindrops. He is unnamed in the series, but he is named in other media.

Warm Front first appears in the season one episode Sonic Rainboom as a Pegasus worker at the Cloudsdale weather factory.

Warm Front appears briefly attending the Summer Harvest Parade in One Bad Apple, watching Rainbow Dash fly through Ponyville at the beginning of Sleepless in Ponyville, and as a Wonderbolts cadet at the Wonderbolt Academy in Wonderbolts Academy.

In Tanks for the Memories, Warm Front appears among other Pegasi moving clouds in preparation for winter.

In No Second Prances, Warm Front is seen flying with Cloud Chaser in the park. In A Hearth's Warming Tail, he's seen stringing lights around bells hanging from the ceiling of the Castle of Friendship. In Top Bolt, Warm is seen with Mane Moon catching Sky Stinger in a net at the Wonderbolt Academy.

In Fame and Misfortune, Warm Front makes a background appearance operating an apple stand in Cloudsdale.

In the special My Little Pony Best Gift Ever, Warm Front appears as a customer at Flim and Flam's stand at the Rainbow Falls Hearth's Warming Craft Fair and is also present when their scheme gets exposed.

In Common Ground, Warm Front appears cheering in the stands for the halftime buckball exhibition game at a tournament in Appleloosa. In The Summer Sun Setback, he appears flying across the screen in a transition while preparing the weather in Canterlot for the final Summer Sun Celebration.

Warm Front appears on the Hot Topic cover of My Little Pony: Friendship is Magic Issue #12. Here, he has his horseshoes cutie mark.

Warm Front appears in a picture with his name listed on page 177 of The Wonderbolts Academy Handbook. 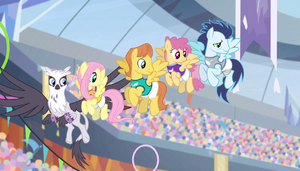