An image of Fluffy Clouds was previewed in an animation image shown at Ponycon NYC on February 16, 2015.[1]

Sunshower, Open Skies, Clear Skies, and Fluffy Clouds first appear in the season five episode Tanks for the Memories moving clouds from Cloudsdale to Ponyville for winter. When Sunshower asks Open Skies where the clouds are supposed to go, she ends up engaging in a confusing conversation with him and Clear Skies because of their names. Rainbow Dash uses the distraction to clear the clouds from the sky. When Open Skies asks where their "fluffy clouds" went, Clear Skies points in Fluffy Clouds' direction.

Fluffy Clouds appears again in Princess Spike as one of the delegates attending the Grand Equestria Pony Summit. At one point, he cries to Spike because a pony had taken his seat in the "Don't Spend All Your Bits" speech presentation hall and seeks advice. Fluffy Clouds brushes off Spike's advice at first, but he listens when he believes the advice came from Twilight Sparkle. The episode's credits list him simply as "Sad Delegate" rather than by name.

In My Little Pony The Movie, Clear Skies appears during the first shot of Canterlot and has a line of dialogue during We Got the Beat. Open Skies also appears during Songbird Serenade's arrival and the Storm King's invasion.

Sunshower appears in My Little Pony: Deviations as part of a group of Pegasi attempting to stop Nightmare Moon.

Fluffy Clouds appears in a photograph in episode 3, "All About Alicorns".

In the Equestrian Odysseys expansion set of Enterplay's collectible card game, card #30 R of Open Skies and Clear Skies gives them the description "Open Skies and Clear Skies don't really get along with Fluffy Clouds. It seems like they just don't mix well together for some reason." and card #92 C of Sunshower attributes to her and Rainstorm the respective quotes "Tomorrow we'll start with overcast and move to rainstorm." and "Wait, are we talking about the forecast or my work schedule?" In the High Magic expansion set, card #26 R of Fluffy Clouds attributes to Manehattan Delegate and Whinnyapolis Delegate the respective quotes "What city is he even representing?" and "Gosh, I don't think even HE knows that."

"Here comes the next shipment! Move those clouds over!"
— Sunshower, Tanks for the Memories

"I was really looking forward to the "Don't Spend All Your Bits" Speech, but when I went into the hall, [tearing up] a pony had taken my seat. A pony who used to be my friend!"
— Fluffy Clouds, Princess Spike

"[gasps] Of course! Oh, the princess is so wise!"
— Fluffy Clouds, Princess Spike

"Princess Twilight must have her hooves full with this giant festival."
— Clear Skies, My Little Pony The Movie 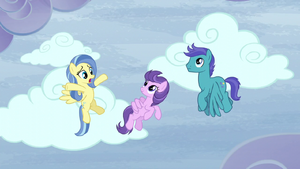