What About Discord? (titled What About Discord[1] by some sources) is the twenty-second episode of the fifth season of My Little Pony Friendship is Magic and the one hundred and thirteenth episode overall. The title and plot are a parody of the 1991 comedy film What About Bob?

Twilight Sparkle returns from a three-day weekend and finds that her friends have become close to Discord, making her wonder if he is up to something.

Discord's portraits of Twilight in his "Bob Ross" cutaways were drawn by storyboard artist Aynsley King.[2][3]

At the Castle of Friendship, Twilight Sparkle and Spike are about to spend the next three days organizing and re-shelving the books in the castle library during what Twilight calls her "book-sort-cation". Spike can think of several activities he'd much rather do, but Twilight promises that they'll make time for relaxing during their book-sorting weekend.

Three days later, the two emerge from the library, and Twilight wonders what she missed during her time spent indoors. Rainbow Dash and Discord suddenly appear, acting particularly friendly toward one another and sharing in inside jokes. As their behavior puzzles Twilight, they depart.

You had to be there

Twilight and Spike, still confused by Rainbow Dash and Discord's behavior, wander into Carousel Boutique to pick up some books that Rarity is donating to the library. Discord appears again, this time accompanied by Fluttershy. Once again, Discord shares in some inside jokes with Twilight's friends, leaving her out of the loop.

Fluttershy says they would've invited Twilight to hang out with them, but they didn't want to interrupt her book-sort-cation. While Twilight appreciates their consideration, she is put off by her friends having such a big laugh with Discord that she isn't a part of.

As she continues making her way through town, Twilight ponders on the weekend her friends had with Discord. Spike suggests that she might be jealous for being excluded, but Twilight dismisses it. At Sugarcube Corner, Twilight and Spike find Discord yet again, having fun with Applejack and Pinkie Pie. Excluded from their inside jokes like before, Twilight once again feels uncomfortable.

The science of friendship

Back at the castle, Twilight is disappointed about having missed out on such a fun weekend. But when Spike again suggests she might be jealous, Twilight says that, as the princess of friendship, she is incapable of jealousy. She reasons that since her friends and Discord are suddenly so close, their experiences over the past three days could help her with her princess duties.

Twilight gathers her friends together in the park to learn about what they did with Discord over the past several days, in hopes of advancing her friendship studies. But when the ponies try to explain their inside jokes, they are unable to recall the events with completely accuracy, insisting that Twilight had to be there in order to understand.

To this end, Twilight attempts to recreate the events of their moments together, down to the tiniest detail. However, despite her scientific approach, Twilight fails to understand what makes their inside jokes funny. Discord suggests that Twilight herself is the problem by trying to forcibly include herself in events that she originally wasn't a part of. He explains that moments of bonding between friends cannot be recreated, but Twilight's friends say she will have other opportunities to share in their merriment.

Unable to figure out why her friends are so close with Discord, Twilight concludes that Discord must have placed a spell on them. She goes to Zecora and explains the situation. Though Zecora is uncertain that magic is at play, she gives Twilight a potion to dispel its effect on her friends.

The next morning, Twilight assembles her friends in the castle throne room and tries to get them to drink the potion. The ponies insist that Discord's magic had nothing to do with the fun they had together, but Twilight believes she knows better. Fluttershy is appalled that Twilight would accuse Discord of such a thing, and when Pinkie Pie drinks the potion, it has no effect.

When Discord arrives and Twilight's friends continue to laugh at their inside jokes, Twilight erupts in anger, deeply upset for not being included in her friends' fun weekend.

Twilight's friends explain to her that, even though she is the princess of friendship, it's okay for her to be jealous about being left out as long as she admits it. Discord reveals that he intentionally left Twilight out of her friends' weekend, insisting that he did not want to interrupt her weekend and that her becoming jealous was an unexpected side effect of his actions.

When Discord tells his inside jokes again, the ponies don't find them funny anymore, and now Twilight has her own inside joke with her friends that Discord isn't a part of. As Discord now begins to feel left out, Twilight approaches him with no hard feelings, and he brings the friends together in a group hug.

Spike: [sighs] Didn't we just shelve all the books in the library a few months ago?
Twilight Sparkle: Yes, but that was because we needed to! This is just because I want to! I call it my "book-sort-cation"! Three uninterrupted days of reorganizing books. Can you think of anything more relaxing?
Spike: Well, claw massages, back rubs, bubble baths... You weren't really looking for an answer, were you?
Twilight Sparkle: I've even devised a better system for organizing them. It decreases the amount of time it takes to find a book you're looking for by nearly three quarters of a second!
Spike: [flatly] Whoa. That much?

Spike: Whoa! That strange yellow orb in the sky! What is that?
Twilight Sparkle: Alright, alright, so it's been a little while since we've seen the sun.

Twilight Sparkle: That was strange, right? Since when have Rainbow Dash and Discord had inside jokes?
Spike: Since sometime in the last three days, I guess.
Twilight Sparkle: Hey! Nopony made you join me on my book-sort-cation.
Spike: I'm jokin', I'm jokin'!

Rarity: [gasps] Twilight! You've returned from your book sorting sabbatical! All that organizing has done wonders for your complexion!
Twilight Sparkle: Thanks! It was very relaxing. And we were able to clear a shelf for those old-fashioned books you wanted to donate.
Rarity: Oh, pfft, they're not old, darling. They're vintage, and they're over there! I've even included my favorites by former Canterlot designer to the stars Rococo Froufrou!
Spike: Oh, I love her!
Rarity: Him.
Spike: [laughs nervously] Both.

Discord: It started when we were helping Granny Smith with her garden...
[flashback music starts]
Applejack: Uh, I reckon you mean my sister Apple Bloom.
Discord: Eh... All you Apples look the same.

Applejack: I recall it bein' a large stick that looked like a hose that, in turn, did in fact resemble a snake.
Pinkie Pie: Point is, we galloped away.
Rainbow Dash: And it chased after us!
Twilight Sparkle: The hose? A snake? A stick?
Rainbow Dash: A snake!
Fluttershy: A hose!
Applejack: A stick!

Zecora: In what way can you tell that they are indeed under a spell?
Twilight Sparkle: They're having fun with Discord, that's why!
Zecora: Ah. A friendship with Discord is truly a shock. But who says it is something that we must block?
Twilight Sparkle: Trust me, they would never laugh like that unless something magical was involved. It's not that funny. I know funny.
[Spike rolls his eyes]

Applejack: [yawns] I wonder why she asked us here so bright and early.
Rarity: Another map adventure, perhaps?
Pinkie Pie: Nope, no glowing tushies here!

Twilight Sparkle: Ugh. But it's still not funny!
Rainbow Dash: It's funny if you were there.
Twilight Sparkle: But I wasn't there! I wasn't included! Maybe it's my own fault for staying in and having a book-sort-cation when I could have been making jokes and memories and having a great time with my friends! But I didn't do that, did I?! You all did! You were all there but—! [sighs] I wasn't there. I missed out. And seeing you having all these jokes I wasn't a part of and couldn't understand made me...
Spike: Jealous?
Twilight Sparkle: No. The Princess of Friendship can't get jealous.
Applejack: Sure you can, Twilight, and none of us begrudge you for it. 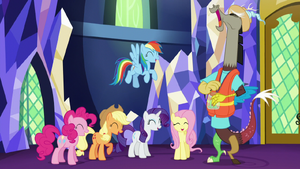 What About Discord? image gallery