White Lightning is a female background Pegasus pony with a white coat, light cerulean mane, light cyan eyes and a cutie mark of a dark cloud with a lightning bolt. She shares her design with Sprinkle Medley and bears a resemblance to Periwinkle. In Magical Mystery Cure and Pinkie Pride, she appears as an Earth pony. She is not named in the show, but she is named in merchandise.

White Lightning appears as a background pony throughout Ponyville and Cloudsdale. She appears in both the original and remastered title sequences; her first appearance in the show is in Friendship is Magic, part 1 at the surprise party that Pinkie Pie throws for Twilight Sparkle in the library. She later appears hovering in the town hall as she along with many other ponies awaits the start of the Summer Sun Celebration.

She visibly drools at the sight of Applejack's muffins in Applebuck Season; a white Pegasus pony with her design and a differently-colored mane is one of the ponies at Ponyville Urgent Care.

In Griffon the Brush Off, she stands behind a vegetable stand in the marketplace. This is the stand through which Gilda pokes her tail and fools Granny Smith into thinking it is a rattler, scaring her away. Gilda then disrespects the stand's produce by saying "This stuff ain't fresh, dude" right in front of White Lightning, who looks at her with a surprised expression on her face. She also watches Trixie's magic show in Boast Busters.

In The Cutie Mark Chronicles, White Lightning appears in both of Rarity and Twilight's flashbacks.

White Lightning appears in The Super Speedy Cider Squeezy 6000 and sings during The Flim Flam Brothers.

White Lightning appears quite frequently in Hurricane Fluttershy. She is one of the many Pegasi helping to create the tornado required to lift the water into Cloudsdale.

In Wonderbolts Academy, White Lightning briefly appears as one of the academy cadets doing push-ups. She also appears in Rainbow Dash's flashback at the beginning of Games Ponies Play and several times in Magical Mystery Cure.

In season four, White Lightning appears in Princess Twilight Sparkle - Part 1, watching the Summer Sun Celebration in Princess Twilight Sparkle - Part 2, in Rainbow Falls, at Rainbow's birth-iversary party in Pinkie Pride, in Simple Ways, in Filli Vanilli, in It Ain't Easy Being Breezies, in the Cutie Mark Crusaders' theater audience in For Whom the Sweetie Belle Toils, at the Ponyville Swim Meet in Leap of Faith, at the Traders Exchange in Trade Ya!, in the stadium crowd in Equestria Games, in an amphitheater at the end of Twilight's Kingdom - Part 1, and in front of Twilight's new castle at the end of Twilight's Kingdom - Part 2.

In season five, White Lightning flees from a swarm of twittermites in Bloom & Gloom, moves clouds in preparation for winter in Tanks for the Memories, observes the Mane Six fighting a bugbear in Slice of Life, attends the Grand Equestria Pony Summit in Princess Spike, appears in Party Pooped, and appears in Ponyville's shared dream in Do Princesses Dream of Magic Sheep? In The One Where Pinkie Pie Knows, White Lightning talks to Derpy and "Dinky Doo".

White Lightning is a character named "Knowledgeable Shopper" in Gameloft's mobile game. Her in-game description states, "This pony have been going to the Rainbow Falls Craft Fair for a couple of years now, and knows where all the best merch is hiding."

White Lightning appears in episodes 3, All About Alicorns, and 7, Hearth's Warming Eve.

White Lightning appears in episode 5 of Fundamentals of Magic, "When Magic Goes Wrong".

In the Enterplay collectible card game's expansion set The Crystal Games, White Lightning is named on her own card #76 C, which gives her the description "White Lightning's dad was a unicorn. Between him and her two sisters, Lightning had plenty of practice getting along with unicorns while growing up!" 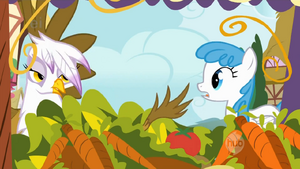