Whitewash is a male background Pegasus pony with a white coat, blue mane and tail, gold eyes, and a cutie mark of a purple umbrella. He is unnamed in the show, but he is named in merchandise.

Whitewash first appears in Sonic Rainboom during the Best Young Flyer competition; after Rainbow Dash rescues Rarity and the Wonderbolts with her sonic rainboom, Whitewash carries Misty Fly to safety.

Whitewash appears later in Hurricane Fluttershy as one of the participating Pegasi to transport water to Cloudsdale.

Whitewash watches the Summer Harvest Parade in One Bad Apple and appears as a Wonderbolts cadet in Wonderbolts Academy, usually seen marching with Rainbow Swoop, Warm Front, and "Thorn".

Whitewash appears among other Pegasi bringing winter to Ponyville in Tanks for the Memories.

In Top Bolt, Whitewash makes a background appearance as a cadet at the Wonderbolt Academy.

In Celestial Advice, Whitewash talks to Royal Riff while attending the Equestrian Pink Hearts of Courage medal ceremony for Starlight Glimmer and her friends. In It Isn't the Mane Thing About You, he appears walking to an apple stand at the Ponyville Marketplace.

In The Summer Sun Setback, Whitewash appears flying to deliver apples with Emerald Green during preparations for the final Summer Sun Celebration in Canterlot. In A Horse Shoe-In, he appears in the audience for the Octavia Melody's concert with DJ Pon-3.

In the Canterlot Nights expansion set of Enterplay's collectible card game, Whitewash is named on card #98 C, which lists the quote "I'm an umbrella in the wind. Watch how I soar."

"I'm an umbrella in the wind. Watch how I soar."
— Enterplay collectible card game Canterlot Nights card #98 C of Whitewash 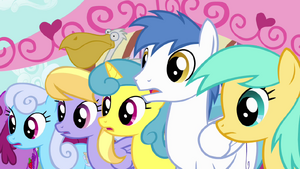