Wild Fire is a female background Pegasus pony who first appears in Twilight Sparkle's flashback in A Canterlot Wedding - Part 1. She has a pale amber coat, a dark brown mane, brown eyes, and a flaming tire cutie mark. She is an original character of Sabrina Alberghetti, and she is named in merchandise and other media.

Wild Fire is an original[2] character[3] —though drawn under contract—[4] of Sabrina Alberghetti, one of the storyboard artists on the show who storyboarded parts of the season two finale. Wild Fire is the second MLP crew OC to appear in the show, preceded by Holly Dash[5] and followed by Peachy Pitt. Her design is also used with different color schemes and cutie marks for Meadow Flower and "Rainbow Drop." Wild Fire's cutie mark is the same as that of Hairpin Turn, a flaming tire. According to a journal by Sabrina Alberghetti, Meadow Flower was originally Wild Fire.[6] Before Tabitha St. Germain confirmed her role on Twitter, Wild Fire's voice actress was unknown.[7]

Wild Fire first appears in A Canterlot Wedding - Part 1 during Twilight Sparkle's flashback, arguing with Lucky Clover. She calms down immediately after Princess Cadance casts a love spell on the argumentative couple.

She later appears in Wonderbolts Academy with the same design as Derpy and Sunshower Raindrops, in two shots: with Starry Eyes and Pizzelle in the first, and in place of Meadow Flower behind Lightning Dust in the second.

Even though by this point, Alberghetti had already left the series, Wild Fire makes a brief background appearance in Top Bolt in the establishing shot of Wonderbolt Academy.

Wild Fire appears in Rainbow Dash and the Daring Do Double Dare, with extended dialogue. At Twilight's Daring Do book club, she questions how unrealistic Daring Do's many feats are and dares Rainbow Dash to perform some of them herself.

Wild Fire is a playable character in Gameloft's mobile game. Her in-game description states, "Wild Fire is a proud Pegasus whose hooves move like... well... wildfire!"

Wild Fire appears in episode 5 of Fundamentals of Magic, "When Magic Goes Wrong".

Wild Fire appears on the Season two poster and is shown on Acidfree's first art print.[8]

In Enterplay's collectible card game, α #10 R and α #ƒ8, cards of Wild Fire, each state "Wild Fire is mostly known for her hot temper and high speeds, but her closest friends know that she’s also a very talented artist."[9][10][11] In the Defenders of Equestria expansion set, card #13 U of Wild Fire lists the quote "The pen is mightier than the sword, unless I'm holding the sword!"

Rainbow Dash and the Daring Do Double Dare

Wild Fire: I like Daring Do as much as the next pony, but do you really think that all those daring things she does are realistic? No way could a pony ever really do them in real life!

Rainbow Dash: I... I dare anypony here to dare me to do anything Daring Do could do!
Wild Fire: And I... dare you to do so! No—I double dare you! 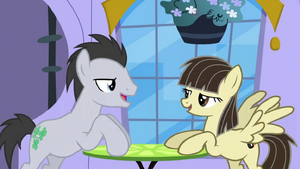