Wind Rider is a male Pegasus pony and the antagonist of the season five episode Rarity Investigates!. He is a retired member of the Wonderbolts who frames Rainbow Dash for a crime to preserve his long-distance speed record.

Wind Rider first appears at a royal dinner at Canterlot Castle mingling with other dinner guests and Wonderbolts. When Rarity and Rainbow Dash arrive at the dinner, Rarity recognizes his Juniper Phoenix stallion cologne. Rainbow Dash is starstruck to meet such a decorated Wonderbolt veteran, calling him a "living legend" and mentioning that he holds the record for the Mustang Marathon. When Spitfire appears and mentions that Rainbow Dash might beat his record, Wind Rider suddenly excuses himself.

The next day, the Wonderbolts practice for an upcoming aerial performance, and Rainbow Dash fills in for Spitfire when she is called away by a note sent from her sick mother. During practice, Wind Rider has difficulty keeping up with Rainbow's speed. When Spitfire's mother Stormy Flare appears and reveals that she never sent a note to Spitfire, Wind Rider suggests someone sent a fake note to take Spitfire's place in the performance, causing the Wonderbolts to suspect Rainbow Dash.

After conducting an investigation, Rarity reveals that Wind Rider himself sent the note and framed Rainbow Dash to get her kicked out of the Wonderbolts and preserve his record. Wind Rider denies the accusation at first, but after Rarity presents several pieces of incriminating evidence against him, he angrily confesses. He justifies his actions by saying "sometimes you gotta play dirty to be the best", but Rainbow Dash and the Wonderbolts strongly disagree.

For his actions against Rainbow Dash, Wind Rider is dishonorably discharged from the Wonderbolts, and Rainbow takes his place in the aerial performance.

Wind Rider's photo appears and he is mentioned by Scootaloo in Parental Glideance.

Wind Rider is a character in Gameloft's mobile game. The game's description of him states, "His wings are true as he soars through the skies, but beware his words, for this pony lies."

WIND RIDER will go to any length to protect his legacy—even if it means lying! He's a disgraced former Wonderbolt who framed Rainbow Dash after she broke his aerial record. Somepony needs to take the wind out of his sails.

Wind Rider is mentioned on card #204 UR of Night Glider in the Equestrian Odysseys expansion set of Enterplay's collectible card game, which states "Night Glider used to look up to Wonderbolts veteran Wind Rider, though Rainbow Dash is starting to look like a slightly better role model." He is also featured on his own card, #140 UR, in the Marks in Time expansion set.

"Yeah, Juniper Phoenix is one of my favorite stallion colognes."
— Rarity Investigates!

"Heh-heh. Well, it's nice to meet you fillies."
— Rarity Investigates!

"Ah, this is preposterous. Wonderbolts, you don't believe a word of this, right?"
— Rarity Investigates!

"I did what I had to do to protect my record! Sometimes you gotta play dirty to be the best!"
— Rarity Investigates!

"Uh, w-w-what? Y-You can't do this to me! I'm one of the greatest Wonderbolts there ever was!"
— Rarity Investigates! 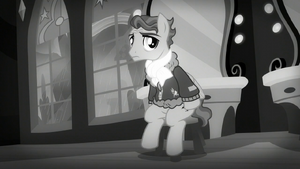