Windigos are a race of ghostly horse-like creatures that first appear in the season two episode Hearth's Warming Eve. They are winter spirits that feed off of the fighting and hatred between others and create blizzards and freezing weather.

Windigos bear a resemblance to horses but are ghostly and translucent in appearance and have no lower body.

They are based on the Wendigo of Algonquian mythology, a malevolent, anthropophagic supernatural spirit or deity associated with winter, the North, coldness, as well as famine and starvation. The word "windigo" is also often used to describe or name people who have gone mad or are thought to be cannibals, such as in Louise Erdrich's Love Medicine.

Windigos first appear in Hearth's Warming Eve during the titular pageant that Twilight Sparkle and her friends put on in Canterlot. In a reenactment of the ongoing feud between Earth ponies, Pegasi, and unicorns, three windigos hover in the sky over the grand summit, looking down with glowing blue eyes.

Later in the episode, the windigos appear again when a conflict escalates between Princess Platinum, Commander Hurricane, and Chancellor Puddinghead. According to Platinum's advisor Clover the Clever, windigos are "winter spirits that feed off fighting and hatred. The more hate the spirit feels, the colder things become!" Before the windigos freeze the ponies in ice, the friendliness and warmth between Clover, Smart Cookie, and Private Pansy creates the Fire of Friendship, melting the ice and driving the windigos away.

At the end of the episode, the Mane Six hear a gust of wind similar to a windigo's howl outside Canterlot Castle after they get into a minor disagreement.

In the season five episode Hearthbreakers, Applejack briefly recaps the tale of Hearth's Warming Eve, including the role the windigos played in it. In addition, a Friendship Express train conductor sells "windigo-frosted snow cones" to train passengers.

In the season six episode A Hearth's Warming Tail, windigos appear in the titular story "A Hearth's Warming Tale". They are believed to be fictional creatures in "a little filly's story" by Snowfall Frost and Professor Flintheart. Windigos made of smoke appear during Snowfall's song Say Goodbye to the Holiday, and they appear in a future shown by the Spirit of Hearth's Warming Future (where Snowfall succeeded in erasing Hearth's Warming), blanketing Equestria with eternal blizzards.

In the season nine episode The Ending of the End - Part 2, windigos appear in Equestria again as a result of Queen Chrysalis, Lord Tirek, and Cozy Glow turning the pony races against each other. They are driven away when Twilight unites the magic of herself and her friends, the Young Six, and the Pillars of Old Equestria.

In the My Little Pony: Equestria Girls Holiday Special comic, Twilight Sparkle and Sunset Shimmer discuss the possibility of there being windigos in the human world on pages 35 and 36. In the My Little Pony Holiday Special 2017 comic, Flim and Flam make up a legend about a friendly windigo named Windy who brings snow to Equestria every year when ponies show her kindness.

In chapter 5 of the chapter book Princess Celestia and the Summer of Royal Waves, "Lesson Number Fun", Princess Celestia asks Duchess Diamond Waves' class of foals at the Monacolt Magic Academy what a windigo is, and Ambrosia Breeze answers "A-Windigo-is-an-evil-spirit-that-feeds-off-fighting-and-hatred-but-can-be-defeated-by-any-'love fire'-such-as-friendship-fire-or-caring-fire."

In The Dragons on Dazzle Island, windigos create cold weather on Dazzle Island due to a disagreement between the native island ponies and a group of migrating dragons. The windigos vanish when Spike convinces the ponies and dragons to come together in friendship.

In Gameloft's mobile game, "Lyra & Bon Bon Save Hearth's Warming Eve: Dr. Whooves has opened a portal to the past, to observe the Hearth's Warming Eve legend. But things went awry and he accidentally released the Windigos! Only Bon Bon and Lyra can come to the rescue and send back the Windigos before they ruin the holidays for everypony!" There is also a character called the Reformed Windigo and a building called the Windigo Trap.[1] Windigos also appear as enemy minions during the Tartarus portion of the game's "School Raze" event.

Windigos appear on the Chaos is Magic poster, the WeLoveFine T-shirt "MLP Villains Allover", and the Hot Topic T-shirt "My Little Pony Villains".

In Enterplay's collectible card game, windigos are featured on card #166 R of the Crystal Games expansion set, which gives the description "It took the magic of three friends working together, each from a different pony tribe, to banish the first Windigos in Equestria from the land."

Legend has it that WINDIGOS are cold winter spirits that are fueled by hatred and evil. The more hate that a Windigo absorbs, the colder the weather becomes. They're said to look like transparent, ghostly horses and can only be vanquished using the Fire of Friendship. 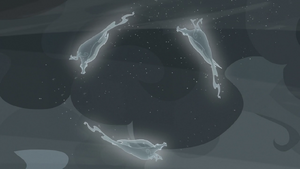