Winona is Applejack's pet and work dog. She first appears in Applebuck Season helping Applejack round up a stampeding herd of cattle. Unlike the Diamond Dogs, Winona only barks and does not speak in any of her appearances. She has a red collar with a golden name tag. She is called Jackaroo in some other media.

"Winona" is a name of Native American origin, meaning "first-born daughter".[1][2] In both behavior and appearance, Winona resembles a Border Collie, which are natural animal herders.

According to Lauren Faust, her name was originally "Brandy", then "Buckaroo".[3] Also according to Faust, Winona is based on her Australian Shepherd, Lucy.

Winona is first introduced in Applebuck Season helping Applejack round up the stampeding herd of cattle that is heading towards Ponyville. Later in the episode, Applejack has a tough time helping Fluttershy round up some bunnies, so Applejack tells Winona to help her, causing the bunnies to stampede towards Ponyville like the cattle did.

Winona later appears in May the Best Pet Win! in Rainbow Dash's dream, where Owlowiscious's head transforms into Winona's, and during the pony pet play-date, playing fetch with Applejack. She also appears in The Last Roundup greeting Applejack as soon as she steps off the train at the end of the episode. In Ponyville Confidential, Winona appears in a photograph as a puppy pulling at a young Apple Bloom's diaper.

In Too Many Pinkie Pies, Winona appears chasing a herd of Pinkie Pies with Applejack, Apple Bloom, and Big McIntosh. In Apple Family Reunion, she licks a filly's face during the reunion, and she appears later in a photo album picture at the end. In Spike at Your Service's first exterior scene, Fluttershy walks her past the Golden Oak Library on a leash.

Winona later appears in Just for Sidekicks as one of the pets Spike sits in exchange for a jewel. Applejack explains that Winona gets wild if she doesn't get her daily exercise, and she also greatly enjoys getting belly-scratches from her owner. When the Cutie Mark Crusaders briefly take over watching the pets, she becomes the recipient of the industrial-size pet hair dryer they had purchased with one of Spike's gems.

In Magical Mystery Cure, Winona appears in one of Applejack's flashbacks.

In Maud Pie, Winona appears with the other pets while the Mane Six and Maud Pie have a lakeside picnic. Winona also appears in Testing Testing 1, 2, 3 playing as a unicorn in Fluttershy's play.

In Do Princesses Dream of Magic Sheep?, Applejack grooms Winona at Carousel Boutique during the Mane Six's pet grooming day. However, due to Applejack's drowsiness, she mistakes Gummy for a hairbrush, and Gummy bites Winona's ear.

In P.P.O.V. (Pony Point of View), Winona delivers a letter to Twilight Sparkle from Applejack saying that she will not be able to attend Twilight's tea party. She also delivers Applejack a message from Twilight stating a friendship emergency.

Winona gets mentioned twice in Fluttershy Leans In by Applejack.

Winona helps out the Apple family during the Confluence in Going to Seed. In The Last Problem, Winona briefly appears in Applejack's group shot during The Magic of Friendship Grows, and her puppies briefly appear in future Sweet Apple Acres with Big Mac and Sugar Belle.

In Pet Project, Fluttershy gives Winona a bath before she has her picture taken alongside the other pets. In Leaping Off the Page, she appears in a photograph with the other pets in Rainbow Dash's bedroom.

In Best in Show: The Pre-Show, Winona is entered into the Canterlot Pet Show by Apple Bloom without Applejack's knowledge. Fluttershy translates Winona's barks, saying that she wanted to surprise Applejack. She also appears in the follow-up short, Best in Show: The Victory Lap as one of the participation award winners.

In "Saving Pinkie's Pie", Winona appears taking part in a big snowball fight, getting hit by a snowball meant for Apple Bloom and happily licking Apple Bloom's face afterward. In "The Cider Louse Fools", she briefly appears at the beginning helping Applejack and her family prepare for the Apple family's annual holiday harvest and cider-making party.

Winona appears in an episode of My Little Pony: Pony Life.[4]

The U.K. My Little Pony magazine calls her Jackaroo, as does the U.S. edition of the Applebuck Season Storybook.

When Applejack calls, faithful WINONA comes loping over. She's a helpful herder who's all about pleasing her master. When she's not delivering important messages, Winona enjoys a nice, long grooming.

A miniature puppy figurine with Winona's color scheme is packaged with early toy releases of Applejack. A larger Winona figure is included with a human Applejack doll in the Equestria Girls Minis Slumber Party Games Set.

In Enterplay's trading cards, series 1 card #38 of Winona gives her the description "This pup's bark is worse than her bite, but that's because she'd never bite you! Winona is a big help on Sweet Apple Acres, herding sheep, pigs, and cows alike. She's very smart and obeys every order Applejack gives her, even if that means riding a herd of stampeding cattle to save Ponyville! It might seem like she's just a work dog, but if you've ever seen Winona greet Applejack after a long trip you can tell she's just as loved as any other pet in Ponyville." 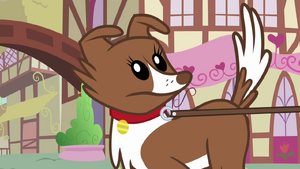