Winter Wrap Up is the eleventh episode of the first season of My Little Pony Friendship is Magic. In this episode, winter comes to an end, and Ponyville prepares for an annual clean-up to make way for spring.

The scene when Rainbow Dash and the pegasi clear the winter clouds near the end of the episode reappears in Deep Tissue Memories.

The scene when Twilight tries to help Applejack and the Earth ponies move the snow reappears in Harvesting Memories.

The episode begins in Golden Oak Library, where an eager Twilight Sparkle awakens ready to take part in this activity and is willing to keep with tradition by not using her unicorn magic. Spike is annoyed about losing sleep over his friend's excitement. Twilight tells Spike that Ponyville was founded by the Earth ponies, and as such, no magic was ever involved in the Winter Wrap Up, an annual "spring cleaning" community event where winter ends and spring is introduced. In this case, the ponies literally clean up winter to prepare for spring. Twilight checks off everything (even Spike complaining and going back to sleep) before heading outside, only to discover that it's not even dawn yet.

In the morning, with a sleepy Spike on her back, Twilight arrives at the center of Ponyville where the Mayor finishes her final speech before the cleanup is divided into three teams: Weather, Animals, and Plants, all wearing Rarity-designed vests of blue, tan, and green respectively. However, Twilight is unable to find an appropriate team to work with and sings about it. She volunteers to help Weather Team leader Rainbow Dash and her flight crew, but she is gently reminded that she has no wings to fly with. Twilight finds Animal Team member and official nest designer Rarity outside the Carousel Boutique, just as she finishes her first nest. Rarity explains that she is nest-weaving for the birds being guided back from the south. Twilight tries her hoof at it, but the one she makes is messy. Twilight leaves to find another line of work while Rarity tries to fix Twilight's nest.

Twilight and Spike then run into Weather Team member Pinkie Pie on one of the frozen lakes, where they find out Pinkie has been an expert skater ever since she was young. She is tasked with scoring the ice so that it will melt more easily when the Weather Team Pegasi clear away the clouds. Twilight tries to help, but it's her first time on skates and she lacks the balance and finesse to ice skate without falling. After Twilight causes them both to crash into a snow bank, Pinkie Pie suggests that Fluttershy could probably use a hand with the critters.

Next, Twilight tries to assist Animal Team member Fluttershy with waking all the animals from hibernation. She seems to have an easy job ahead of her, until she is scared by a den of snakes. Panicked, she backs away into a cave of bats, gets stung by bees, and is sprayed by skunks. While Twilight is busy bathing in tomato juice at home, Spike suggests that she should break her "no-magic" promise so her work would be easier, but Twilight refuses.

That changes when she helps Plant Team leader Applejack and the plant team with clearing the snow from the fields, with one-pony-powered snow plows in order to prepare for seed planting. Twilight wants to man a plow, but Applejack hesitates; she soon relents when Twilight asks to give her a chance. However, despite her best efforts, Twilight is unable to push the snow plow. Twilight decides to use a "come-to-life" spell to move the plow. Unfortunately, the spell soon goes out of control, resulting in an even bigger mess than before. Applejack berates Twilight for her use of magic, and Twilight runs off in tears.

With no options left, Twilight hides in a bush in the town square refusing to come out, but she soon overhears that no one else in Ponyville is faring much better. Applejack wants Rainbow Dash's weather Pegasi to get the snow quickly melted for seeding, but Fluttershy wants Rainbow Dash to wait until she can clear the animal homes beforehand. The ice covering the lakes is not melting quickly enough due to poor scoring. Rarity was so focused on fixing Twilight's nest all day that she hasn't made more, and she was supposed to have finished several hundred by now. Big McIntosh leads Caramel to Applejack, who guesses correctly that he has lost the grass seeds again, and Rainbowshine tells Rainbow Dash that Ditzy Doo has gone north to guide back the southern birds. The mayor laments that her motivational speech from earlier had fallen on deaf ears. It appears that Ponyville will finish their Winter Wrap Up late, just like every past year, and it will soon be sunset. At this point, Twilight remembers her one other talent besides magic: organization. She breaks up the argument and volunteers to guide everyone in their tasks.

With careful planning, teamwork, and everyone working through the night, the residents of Ponyville are finally able to finish their work on time. A montage of the successful, organized Winter Wrap Up is shown to an instrumental version of the Winter Wrap Up tune. Thanks to her exceptional organizing and leadership skills, Twilight is designated the new position of 'All-Team Organizer' by the Mayor, along with a new and unique vest by Rarity that incorporates the colors of all three teams. Mayor Mare declares winter wrapped up on time, and the ponies celebrate their accomplishment. They share a laugh at Spike afterward, who's fallen asleep on an ice floe, blissfully unaware of the predicament he's currently in.

Twilight Sparkle relays her report to Princess Celestia, learning that everyone has hidden talents, and if they're patient and diligent, they'll find them. She also learned that everyone can accomplish anything when they work together and treat each other as friends. Before she can send her report, however, a cold-ridden Spike drops off to sleep; Twilight laughs it off.

Twilight Sparkle: Okay, let's see: scarf, check; saddle, check; boots, check; Spike refusing to get up and going back to sleep, check. It's a good thing I'm so organized, I'm ready. Bright and early. Oh... maybe a little too early.

Twilight Sparkle: Great, now what do we do?
Spike: I don't know about you, but I'm gonna be nappin'. [snore]
Twilight Sparkle: Come on Spike, this is serious business. Winter needs to be wrapped up, and I'm determined to do my part. Somehow.

Spike: That nest needs to be condemned.
Rarity: Oh, Spa-ha-hike, it's not so bad, ah, maybe birds can use it as a...
Spike: An outhouse?

Spike: You are a natural, Twilight. A natural disaster.

Pinkie Pie: Twilight, you did a great job your first time around. I'm sure my first time was just as wobbly and bobbly and crasheriffic as yours.
Twilight Sparkle: Really?
Pinkie Pie: No.

Spike: I definitely like the idea of hibernation, uh, except for the "eat less food" part.

Applejack: Nuts, Twilight, you used magic.
Spike: The nerve. Can you believe her?
Applejack: That's not how we do it 'round here, Twilight, and especially not on my farm.

Twilight Sparkle: I'm a winter mess up.
Spike: Well you're good at a lot of things, just not nest-making, ice-skating, animal-waking, snow-clearing.
Twilight Sparkle: [whine] Thanks a lot for making me feel so much better.
Spike: That's what I'm here for, sister.

Mayor Mare: If only we could be more organized.
Twilight Sparkle: Spike! Get my checklist and clipboard, STAT!
Spike: Eh, yes, ma'am.

Twilight Sparkle: I know you all want to complete your jobs on time, but arguing is no way to go about it. What you need is organization, and I'm just the pony for the job. 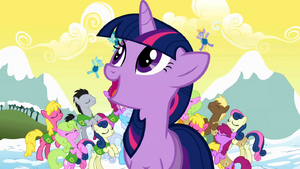