My Little Pony Friendship is Magic Wiki
Register
Don't have an account?
Sign In
Advertisement
in: Events, Featured articles
English

Winter Wrap Up is an annual event in Ponyville that involves clearing winter and bringing in spring.

In Canterlot, magic is used to end winter. However, because Ponyville was founded by Earth ponies, they change the seasons from winter to spring without using magic. Even after unicorns started settling there, the tradition was continued.

All ponies are assigned to one of three teams: weather, plants, or animals.

Vests are worn in Winter Wrap Up and flashbacks to it in The Return of Harmony Part 2 and Magical Mystery Cure during Winter Wrap Up, in Luna Eclipsed during Nightmare Night, in My Little Pony: Friendship is Magic Issue #10 during Summer Wrap-Up, in a November 6, 2013 "vorläufige Abbildung" image for mystery packs, in My Little Pony (mobile game) from December 12, 2013 onward, in Trade Ya! during the Rainbow Falls Traders Exchange, in a December 16, 2014 promotional image for a Festival of Lights,[1] and in The Gift of the Maud Pie.

Composed mostly of Pegasi, the weather team clears the sky of clouds and lets the sun warm up the land. Assigned ponies depart to retrieve the birds that have flown south for the winter. Several Earth ponies and a few unicorns, Pinkie Pie being one of the former, are assigned as lake scorers, who cut the ice as they ice skate on it, making it easier to break and to melt when the sun comes out. Rainbow Dash, sometimes Sprinkle Medley, sometimes Sunshower Raindrops, sometimes Rainbowshine, and sometimes Cloud Kicker each wear a team leader's vest and band; Mayor Mare alludes to Rainbow Dash as a team leader.

Earth ponies from the plant team ensure that Ponyville will have enough food during the year. They move snow off the fields, plow them, and plant and water the seeds. The team also includes some unicorns and a small number of Pegasi. Applejack and sometimes Shoeshine each wear a team leader's vest and band; Mayor Mare alludes to Applejack as a team leader. Spike and Mayor Mare can also be seen helping out the plant team.

The animal team mostly consists of Earth ponies and unicorns, but a small number of Pegasi, most notably Fluttershy, are seen on the team. The team wakes up hibernating animals, cleans up their dens, and ensures that they have food to eat. Rarity was put in charge of nest-making for the returning birds. Amethyst Star wears a team leader's vest and band; Mayor Mare alludes to Amethyst Star as a team leader. Big McIntosh can also be seen helping out the animal team.

In the namesake episode, the traditional methods had failed for the past few years for unspecified reasons. Arguments arose and inevitable mistakes turned into major problems due to a lack of planning and coordination. Twilight Sparkle lends her skills to the effort, helping Ponyville bring spring in on time, earning the title of All-Team Organizer, and a special vest comprising of the colors of each team. 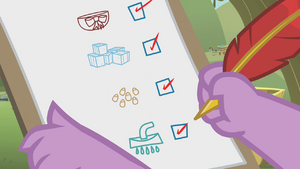