Wisp is the placeholder name of a male Earth pony with a light yellow coat, light blue mane and tail, blue eyes, and sometimes a cutie mark usually of two bunches of green grapes. In Rarity Takes Manehattan, he appears as a Pegasus pony.

Wisp first appears in the season two episode The Mysterious Mare Do Well as a passenger of a runaway carriage bus. Before the carriage careens off a cliff, it is stopped by Mare Do Well. Wisp attempts to thank Mare Do Well for the rescue, but she has already left the scene.

Wisp appears briefly in Games Ponies Play aboard the Friendship Express train to the Crystal Empire.

Wisp appears in Rarity Takes Manehattan during the song Generosity, with an uncredited speaking role by Daniel Ingram. He shivers from the cold at the top of a Statue of Liberty-like observatory, and Rarity gives him a scarf. A Pegasus version of Wisp also briefly appears during the song. Wisp appears again in the stadium crowd in Equestria Games.

In Made in Manehattan, Wisp appears at a Manehattan crosswalk and later watches the Manehattan Theatre Revival.

In The Crystalling - Part 1, Wisp is seen waiting at the Crystal Empire train station.

In Fame and Misfortune, Wisp aggressively criticizes Fluttershy with other ponies after the publication of the Mane Six's Friendship journal in Ponyville, complaining that even he has learned more than her, so why can he not be in the book. He later appears in the mob of arguing ponies in front of the Castle of Friendship.

In Molt Down, Wisp makes various background appearances as part of a School of Friendship tour group.

In Between Dark and Dawn, Wisp makes a background appearance at a tourism stop with an unnamed mare during Lotta Little Things. In Growing Up is Hard to Do, he appears on the train to Appleloosa and gets startled by Scootaloo as she scooters through the train. He later appears as a patron of the Appleloosa County Fair standing by a high striker game and carries Apple Bloom with a crowd of other ponies after she hits the game's bell.

Wisp appears on the season 4 poster.

"Even I've learned more than she has! Why can't I be in the book?!"
— Fame and Misfortune 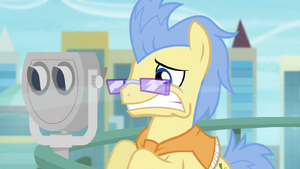