For the seventh episode of season three, see Wonderbolts Academy.

The Wonderbolt Academy is the principal setting in the episode Wonderbolts Academy. Rainbow Dash receives an invitation to attend the academy for one week. The Wonderbolt Academy is a boot camp complex consisting of a paved runway along with some other structures at the peak of a mountain plateau, with other buildings, such as a mess hall and offices, located on clouds dotted around the mountaintop. An obstacle course with another paved runway is also located around the mountaintop.

In the episode The Cutie Mark Chronicles, the summer flight camp runway in Fluttershy's flashback has the same design as the Wonderbolt Academy obstacle course runway.

In the episode Wonderbolts Academy, Spitfire gives her cadets a typical boot camp styled training while playing the role of a typical drill sergeant.

The first exercise that Spitfire gives is a precision and recovery drill, where the cadets are instructed to land as quickly and smoothly as possible after being made dizzy by a contraption called the "Dizzitron". The Dizzitron works by spinning the trainee around in circles before releasing him or her. The centripetal force launches the trainee into the air, disorientating him or her. When it is Rainbow Dash's turn, she recovers from the "spin-out" and flies back to Spitfire in six seconds, which Spitfire calls "an academy record". Lightning Dust requests that the Dizzitron is reset to the maximum speed. She regains control and flies back in six and a half seconds, which Spitfire deems to be "not bad". The other cadets appear dazed and exhausted after their turns, and one of them crash lands on the runway.

Spitfire announces that the cadets will be working in pairs for the remainder of the camp, and tomorrow morning she will post the teams and who will be "lead pony" and "wing pony". Rainbow Dash, who is disappointed by Spitfire's decision to make her wing pony, approaches Spitfire in her office. Spitfire is busy stamping a stack of Wonderbolts posters with an inky horseshoe when Rainbow Dash enters. The office is decorated with Wonderbolts paraphernalia, and two uniformed guards wearing tinted sunglasses guard the door. Spitfire justifies her decision to allocate Lightning Dust to the lead pony role because she likes to push herself "a little harder" than Rainbow Dash does.

When the training resumes, Lightning Dust shows Rainbow Dash her gold lead pony badge, while Rainbow Dash must wear a silver wing pony one. Spitfire announces that the cadets will be participating in a flag hunt. The cadets are divided into two teams: red and blue, and whoever finds the most flags of the opposing team's color wins. When a Pegasus says how much fun it's going to be, Spitfire corrects her and states that the flag hunt is solely for training purposes. In addition, she states that each pair has to stick together. If a lead pony and a wing pony splits apart, they will be disqualified. During the drill, Rainbow Dash spots her pair's first flag, located in a narrow ravine. They retrieve the flag, but Rainbow Dash's right wing is injured in the process.

The next day, the cadets are put through the academy's "famous air obstacle course". According to Spitfire, the purpose of the exercise is to work on one's precision flying in extreme circumstances. She reminds the trainees that they should not strive to win because it's not a race. As she speaks, three Pegasi load buckets into cloud-making machines, and two other Pegasi kick the clouds to produce lightning. Another row of machines generate powerful jets of wind.

The pairs are given the signal to begin flying, and they first pass through narrow loops made out of clouds. They encounter pinkish clouds whizzing by at high speeds, which Rainbow Dash and Lightning Dust deftly dodge. The next obstacle replicates thunderstorm conditions, buffeting the cadets with rain and gusty wind. The last obstacle consists of a row of machines that generate powerful jets of wind, which the cadets must dodge in order to pass safely. Spitfire commends Lightning Dust and Rainbow Dash for their record time, and allows them to go to the mess hall early.

For the next exercise, the pairs work together to obliterate small clouds while a Wonderbolt assistant keeps tally of each team's cloud count. However, when Lightning Dust decides to create a dangerous tornado to complete the task in an even shorter time, she and Rainbow Dash lose control of it. The tornado destroys the Twinkling Balloon that Rainbow Dash's friends are traveling in, and she manages to rescue them. It is Rainbow Dash's anger at her partner's persistent recklessness, and how the academy rewards senseless risk-taking, that drives her to approach Spitfire again. Rainbow Dash tells her that if being reckless is what is rewarded in the academy, and is required to become a Wonderbolt, then she does not want to be a part of it. She lays her badge on Spitfire's desk and quits.

When Rainbow Dash's friends are consoling her outside, Spitfire catches up to her and admits that being the best should never come at the expense of their fellow ponies. Being elite isn't about pushing oneself, it's about pushing oneself in the right direction, which Rainbow Dash has demonstrated. For this reason, Spitfire rips Lightning Dust's badge off her uniform and bestows it on Rainbow Dash. Spitfire shouts, "Now get out there and give me twenty!" and the other cadets salute Rainbow Dash and fly off with her.

The location is briefly mentioned by Spitfire and Rainbow in the episode Rainbow Falls.

In Newbie Dash, the academy serves as the Wonderbolts' headquarters, with the compound split between the cadets' barracks and the full members' barracks. When Rainbow Dash is promoted to full Wonderbolt status, she reports to the academy to train for an upcoming Ponyville performance with the other Wonderbolts. Through an act of misfortune, however, she is saddled with the nickname "Rainbow Crash".

As per a special set of rules among the Wonderbolts, the worst flyer of the day is forced to clean the entire compound.

In Top Bolt, the Cutie Map summons Twilight Sparkle and Rainbow Dash to the Academy to solve a friendship problem between Wonderbolt hopefuls Sky Stinger and Vapor Trail.

In Secrets and Pies, Pinkie Pie visits the Academy for Rainbow Dash's seventy-third and seventy-fourth Wonderbolt training sessions and during her investigation into Rainbow's actions.

In The Washouts, Rainbow Dash brings Scootaloo to the Academy to show her the Wonderbolts' flight formations, and get Spitfire to try and convince Scootaloo into not joining Lightning Dust's Washouts team.

The Academy is briefly seen in The Last Problem when Rainbow Dash goes there to pick up the team to perform for Twilight's coronation. She finds the place empty, with a janitor telling her that the rest of the team already left.

In My Little Pony: Friendship is Magic Issue #81, Thunderlane brings Rumble to the Wonderbolt Academy for Foals and Friends Weekend. After Rumble is accidentally injured, he and Scootaloo are shown a hall of statues commemorating past Wonderbolts, including Wind Sock, the only non-Pegasus Wonderbolt. 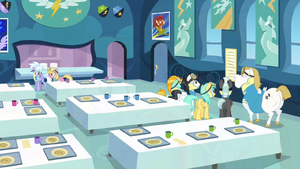