For other uses, see Animation/Gallery#Scripts, etc..

Written Script is the placeholder name of a male unicorn pony with a gray coat, purple mane and tail, green eyes, and a cutie mark of a scroll.

Written Script first appears in the season two episode The Mysterious Mare Do Well as a member of Rainbow Dash's fan club atteindg a club meeting in the Cutie Mark Crusaders' clubhouse. In the following episode, he appears in the crowd at the Wonderbolts Derby. He also plays a peasant unicorn in the Hearth's Warming Eve pageant. He appears next to Golden Harvest and "Dinky Doo" in The Last Roundup, in several crowd shots in The Super Speedy Cider Squeezy 6000, and during the Smile Song in A Friend in Deed.

Written Script appears outside Twilight Sparkle's library complaining about Pinkie Pie's clones in Too Many Pinkie Pies. In One Bad Apple, he watches the Summer Harvest Parade. He appears nuzzling Golden Harvest in both Just for Sidekicks and Games Ponies Play, and he attends Twilight's princess coronation in Magical Mystery Cure.

Written Script appears at the Summer Sun Celebration at the end of Princess Twilight Sparkle - Part 2, and he once again nuzzles Golden Harvest in Flight to the Finish. He appears at the Rainbow Falls train station in Rainbow Falls, during Pinkie the Party Planner and at the end of The Goof Off in Pinkie Pride, at the Hay Burger restaurant in Twilight Time, at Sweetie Belle's play in For Whom the Sweetie Belle Toils, at the Traders Exchange in Trade Ya!, and in the auditorium at the end of Twilight's Kingdom - Part 1.

Written Script attends the Grand Equestria Pony Summit in Princess Spike, walks in Canterlot in Amending Fences, and appears at Canterlot Carousel's grand opening in Canterlot Boutique. In The Mane Attraction, he appears in the audience at the Helping Hooves Music Festival for Coloratura's performance of The Magic Inside.

In No Second Prances, Written Script appears in the audience cheering for Trixie's magic show. In A Hearth's Warming Tail, he appears in Canterlot in the titular story, during Pinkie's Present, standing on a fountain as other ponies pull up bells over it as Hearth's Warming decorations. In Spice Up Your Life, he makes background appearances in Canterlot's Restaurant Row talking to Star Bright, watching Pinkie Pie and Saffron Masala advertise the Tasty Treat and dismissing a flyer for the restaurant during It's Gonna Work, and walking through Restaurant Row with Amethyst Star in the evening. In The Cart Before the Ponies, he makes a background appearance spectating the Ponyville Applewood Derby during Derby Racers as mud is splashed in his direction by Derpy's cart. In The Fault in Our Cutie Marks, he makes a background appearance walking by a well in Ponyville during Find the Purpose in Your Life.

In Forever Filly, Written Script makes a background appearance standing in Ponyville with Cherry Fizzy. In Fame and Misfortune, he appears in the the crowd of ponies outside the Carousel Boutique with anti-Rarity picket signs, and subsequently in the mob of ponies arguing over the Mane Six's friendship journal. In Triple Threat, he makes background appearances walking in Ponyville with Sea Swirl and subsequently attending Spike's Dragon Fire Flame of Friendship Ceremony for Thorax and Ember. In Shadow Play - Part 2, he appears in a flashback walking in Stygian's flashback before getting into a fight with another pony as the Sirens use their voices to stir conflict in Stygian's village.

In The Maud Couple, Written Script appears walking in Ponvyville in Pinkie Pie's binoculars watching Princess Erroria and Piña Colada run by. In Horse Play, he appears in the audience for the School of Friendship play. In Yakity-Sax, he makes a backgroud appearance walking to Ponyville Town Hall with Sea Swirl. In The Washouts, he attends the Rainbow Dash fan club meeting at the beginning of the episode, before it is abruptly dismissed by Scootaloo, and subsequently attending the Scootaloo fan club meeting at the end of the episode.

In Common Ground, Written Script appears in a movie theater in Appleloosa as it plays the opening newsflash. In The Last Crusade, he makes a background appearance attending Cutie Mark Crusader Appreciation Day watching the Wonderbolts perform. In Between Dark and Dawn, he appears in the audience for the pony version of Wicked during Lotta Little Things. In The Summer Sun Setback, he appears in Canterlot Castle courtyard during preparations for the final Summer Sun Celebration, and subsequently in the stands spectating the Celebration. In A Horse Shoe-In, he appears in the audience for Octavia Melody's concert with DJ Pon-3. In Growing Up is Hard to Do, he makes a background appearance at a carrot stand at the Appleloosa County Fair. In The Ending of the End - Part 1, he appears in Canterlot, walking to a house while looking distrustfully at Rainbow Dash and her friends, before quickly entering and slamming the door, due to the efforts of Cozy Glow, Lord Tirek, and Queen Chrysalis to make the ponies of Equestria distrustful of each other.

Written Script is one of many ponies seen in the establishing shot of Ponyville in My Little Pony Equestria Girls: Spring Breakdown.

Rainbow Dash Fanpony is a character in Gameloft's mobile game. His in-game bio states, "Enjoys looking upwards: whether at the stars at night, or at his favorite Wonderbolt during the daytime." 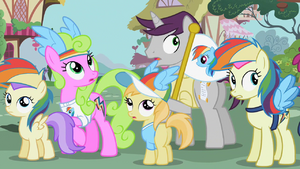